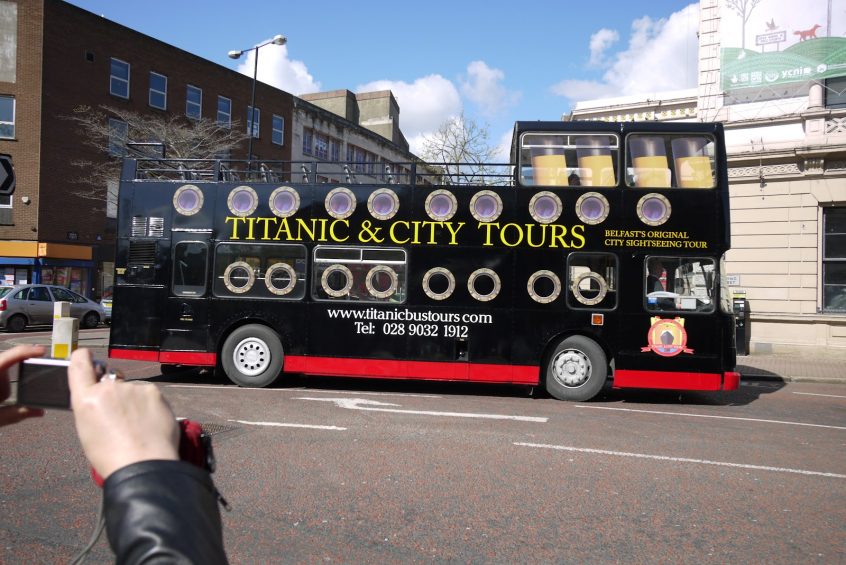 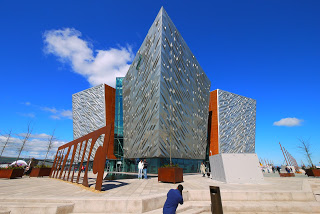 The weekend of 14th April was the centenary of the sinking of the Titanic, a hugely significant date in the maritime and social history of Belfast. We had arranged to visit the city for a Van Morrison dinner concert taking place that weekend in The Culloden Hotel. We had set out innocent of all knowledge of the imminent anniversary but as soon as we stepped off the plane and got to the centre it became apparent that Belfast was deep in the throes of a titanic Titanicfest. 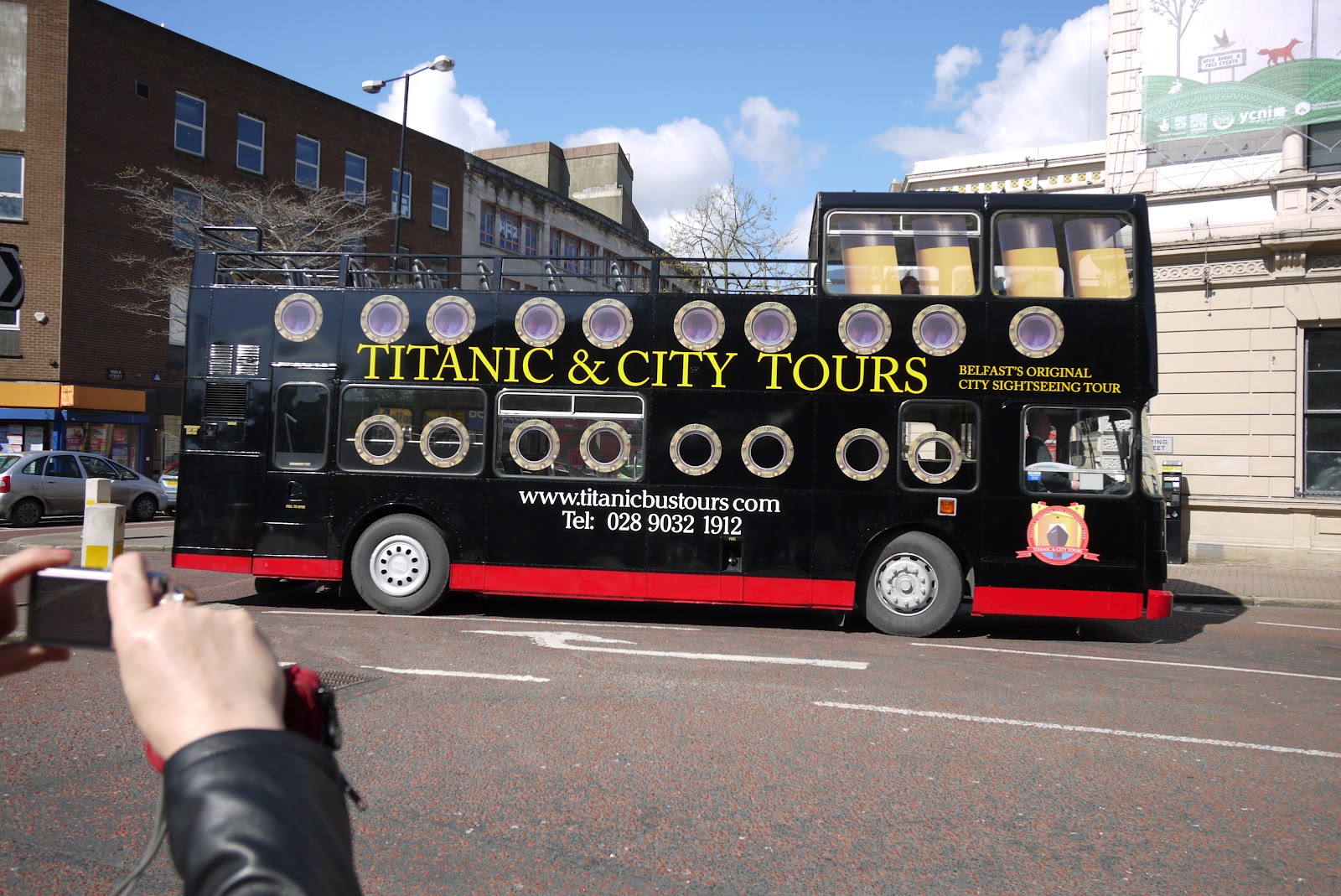 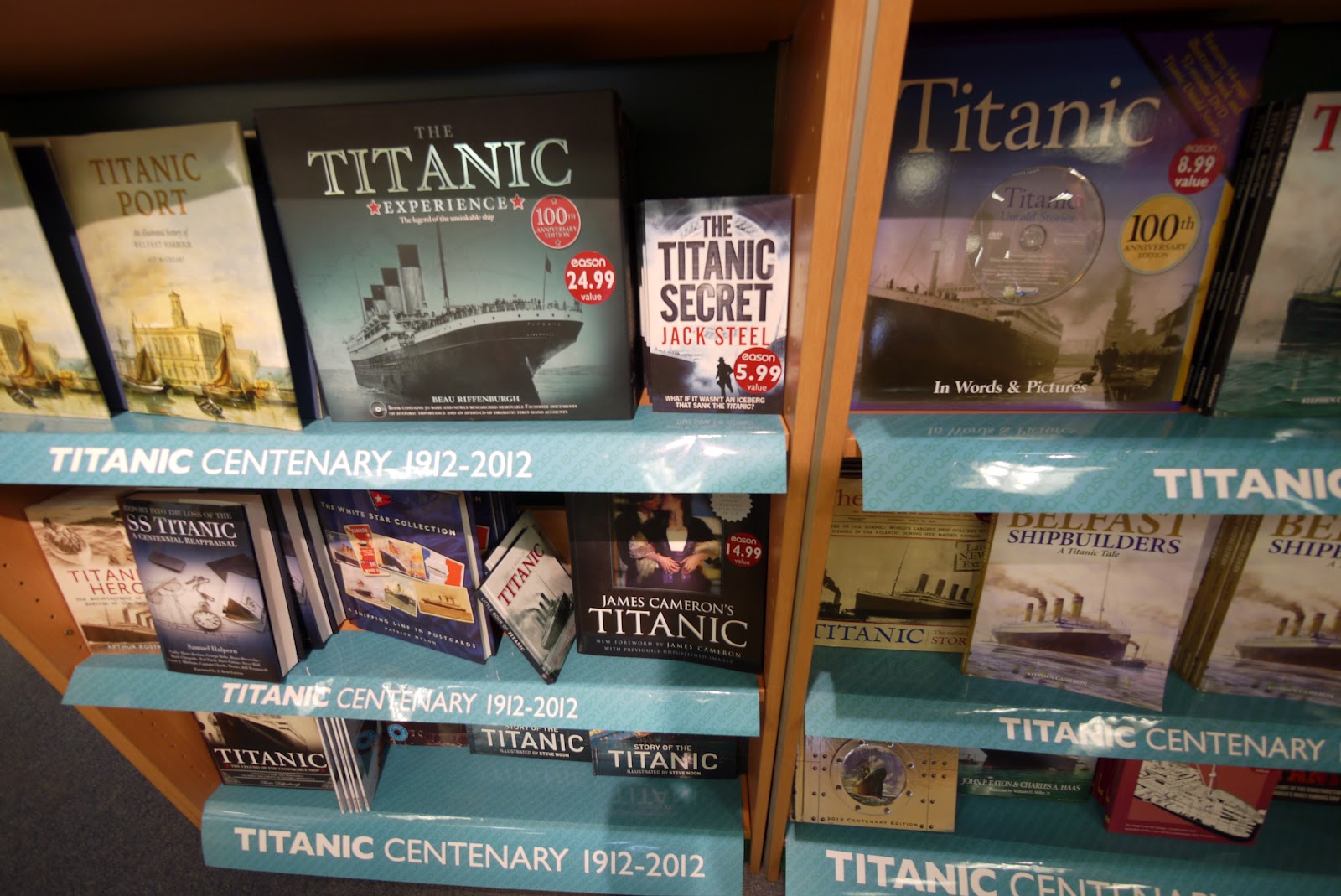 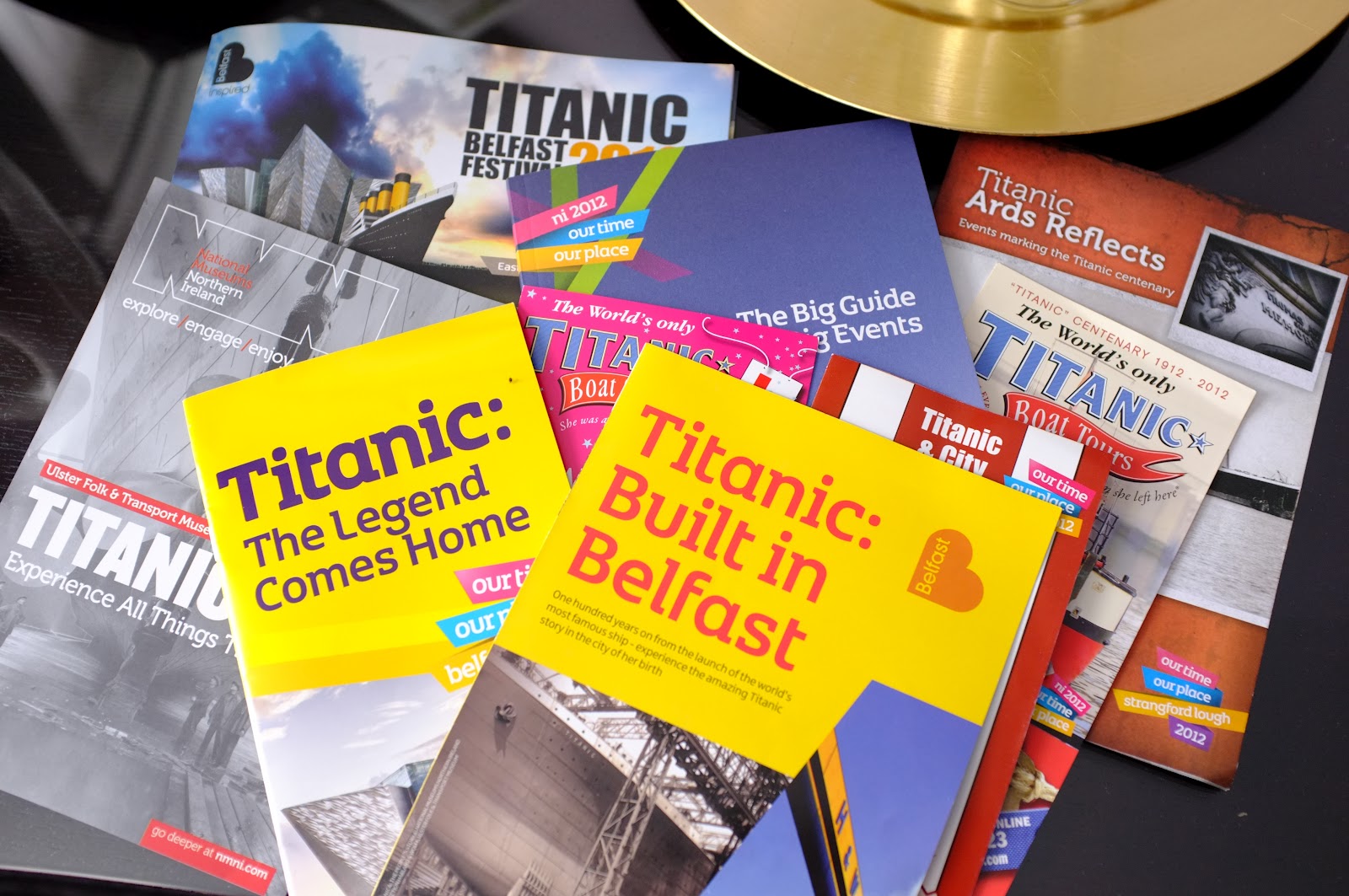 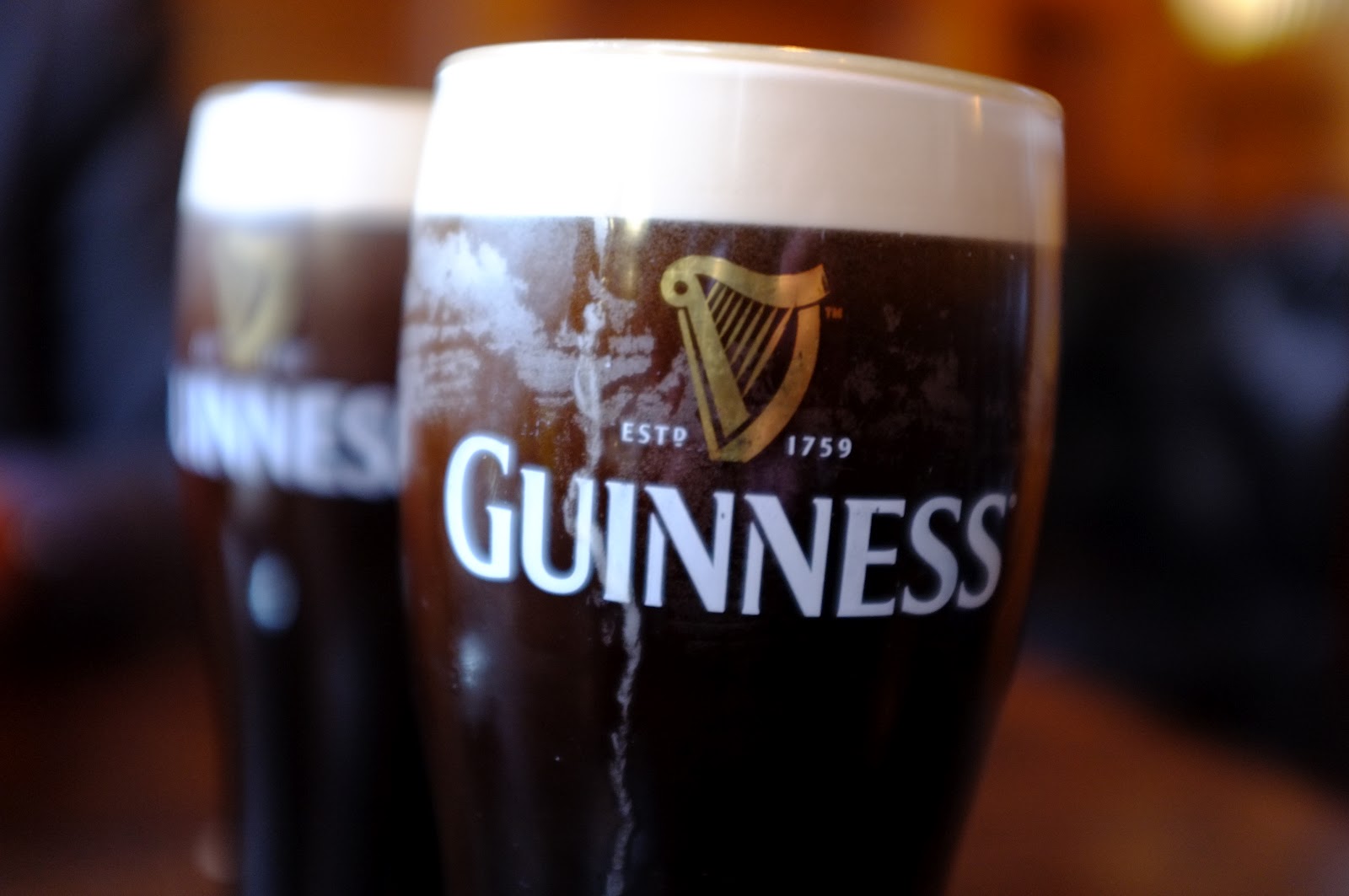 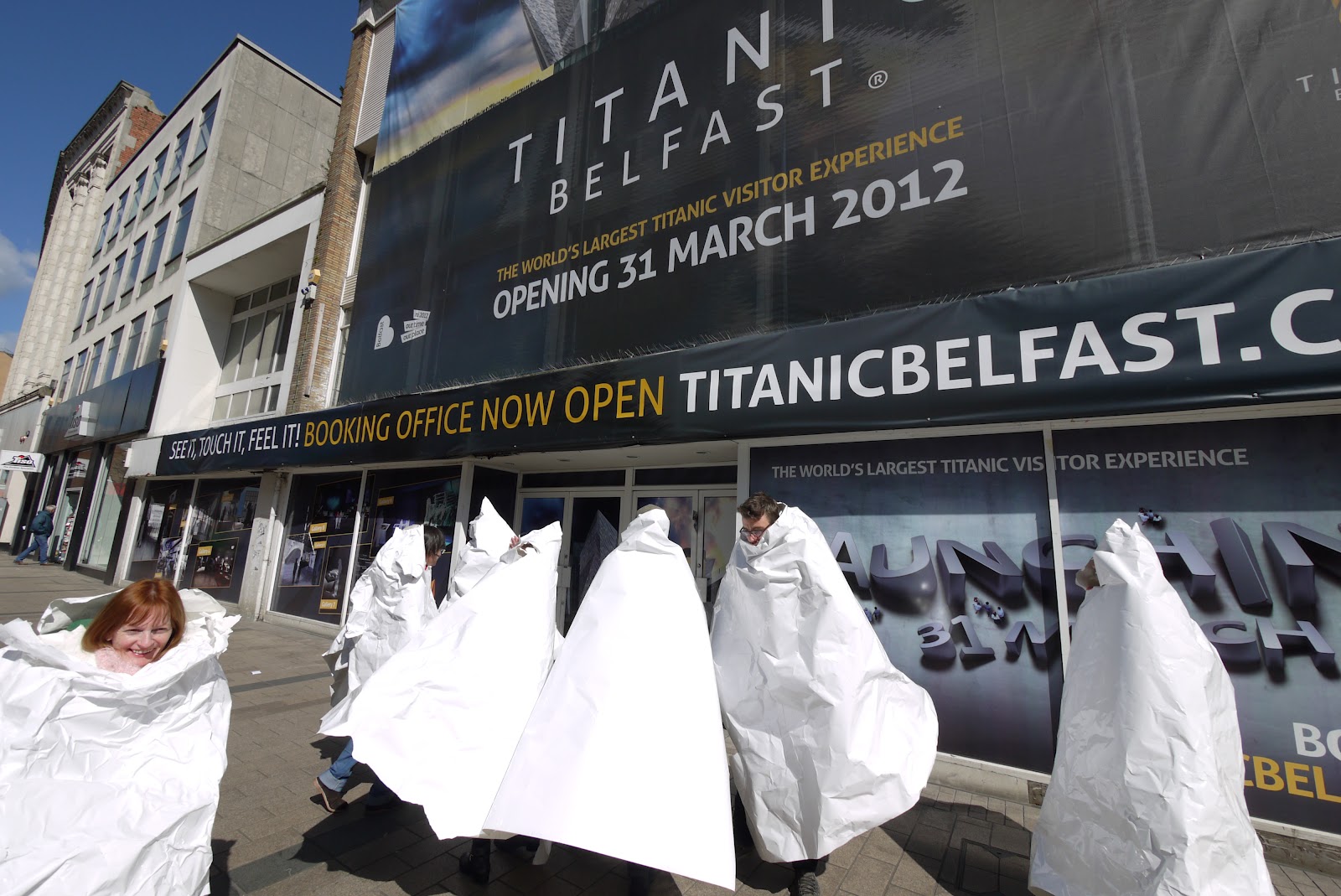 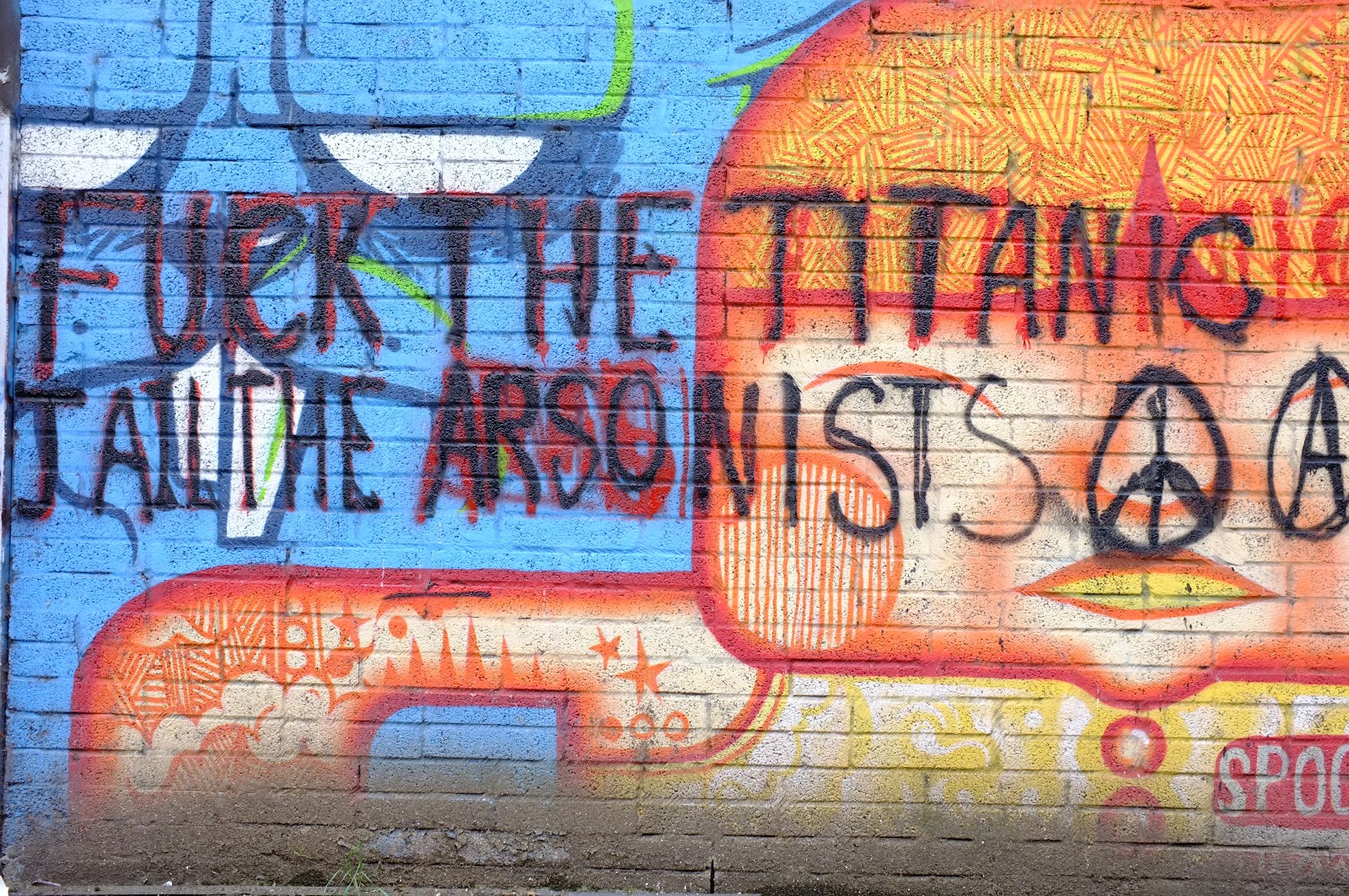 The Titanic was oozing out of every one of Belfast’s pores; turning every corner it was impossible to avoid Titanic Tarts, Titanic Beer, Titanic Sandwiches, Titanic Bus Tours, Titanic Books, Titanic Cappuchinos, Build it Yourself Titanics, Sink Your Own Titanics, Titanic Titanics everywhere. Even Queens Island which was where Harland & Wolff had built the Titanic and thousands of other ships since the mid 19th century, had itself been renamed. It is now grandiloquently called The Titanic Quarter and is destined to be developed to become a new city on the edge of the city. 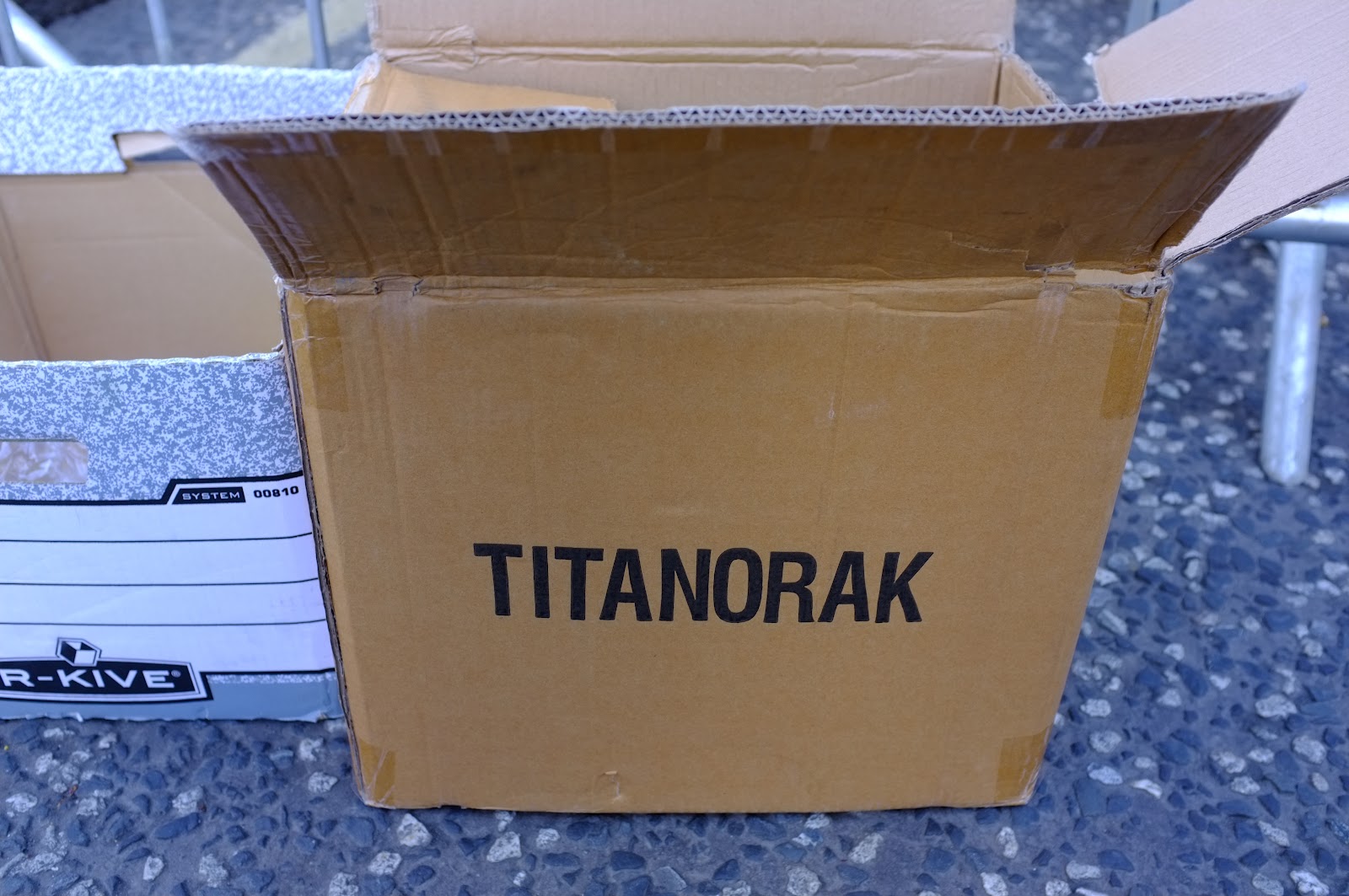 Belfast is where the Titanic was conceived, designed and built and it is here that the curious visitor can still find traces of that magnificent doomed enterprise. On Queen’s Island you can visit the derelict Drawing Offices in which draughtsmen meticulously planned and drew the positions of every single one of the tens of thousands of rivets that stitched the steel hull together. The slipways from which she was launched also still remain. You can walk by the Thompson Dry Dock where she was fitted out and see the original pump-house that was used to drain the water from the dock. 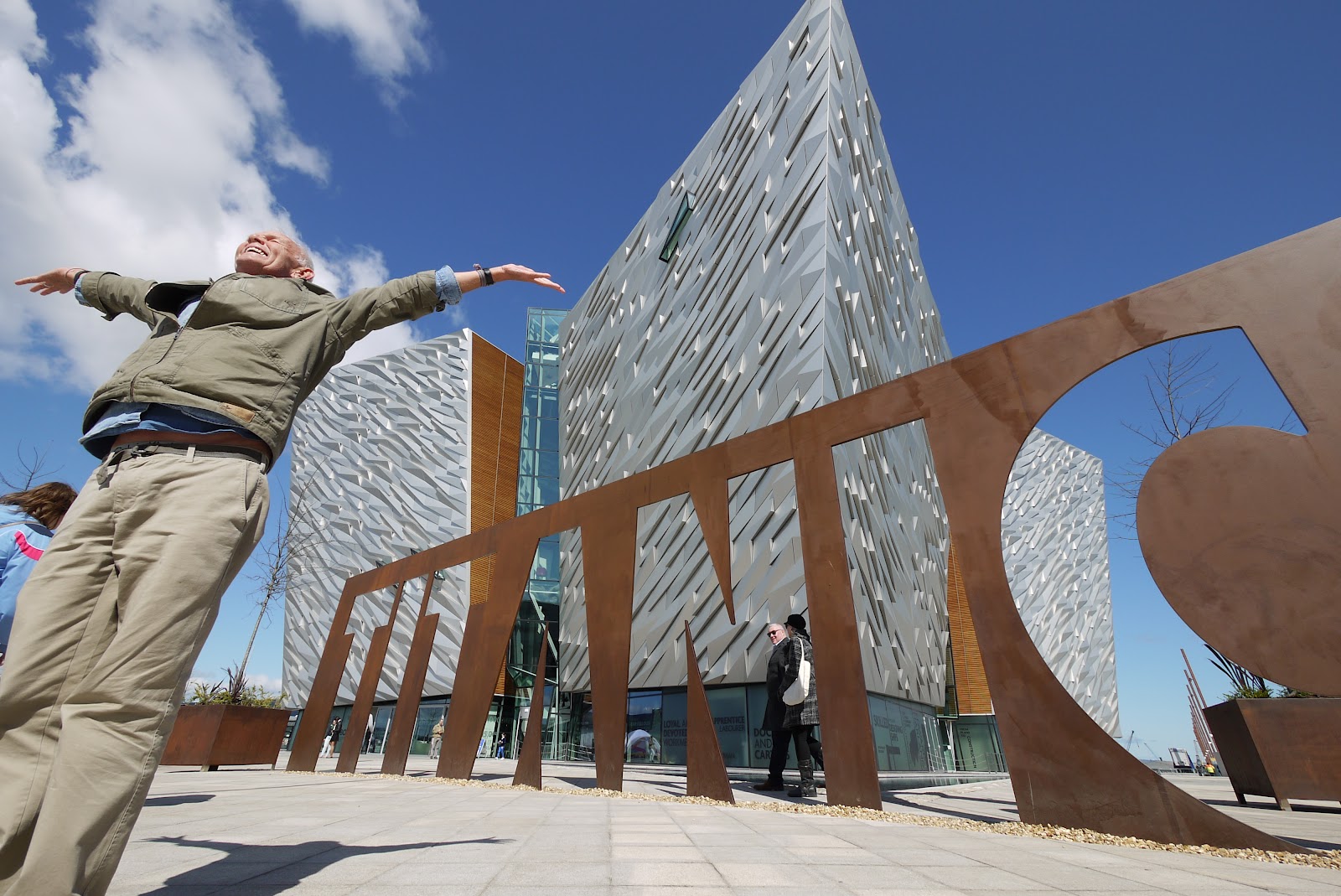 The centrepiece of the redevelopment of the old shipbuilding area is what is billed as the world’s greatest Titanic Museum – “Titanic Belfast”. Here visitors are invited to immerse themselves in the life of 1900s Belfast a city which then was an industrial superpower with shipbuilding, engineering works and linen manufacturing. From this base of technical knowledge came the confidence and the expertise to build the Leviathan of the Oceans. From this historical starting point the visitor traces the development of the project using modern interactive technology and at one juncture a Disneyesque Shipyard Ride in which you sit in a computer controlled capsule which wafts you through a virtual shipyard. Given Belfast’s recent industrial decline it is not a little significant and ironic that one of the commentary options in the capsule is Chinese, the language of our generation’s industrial superpower. 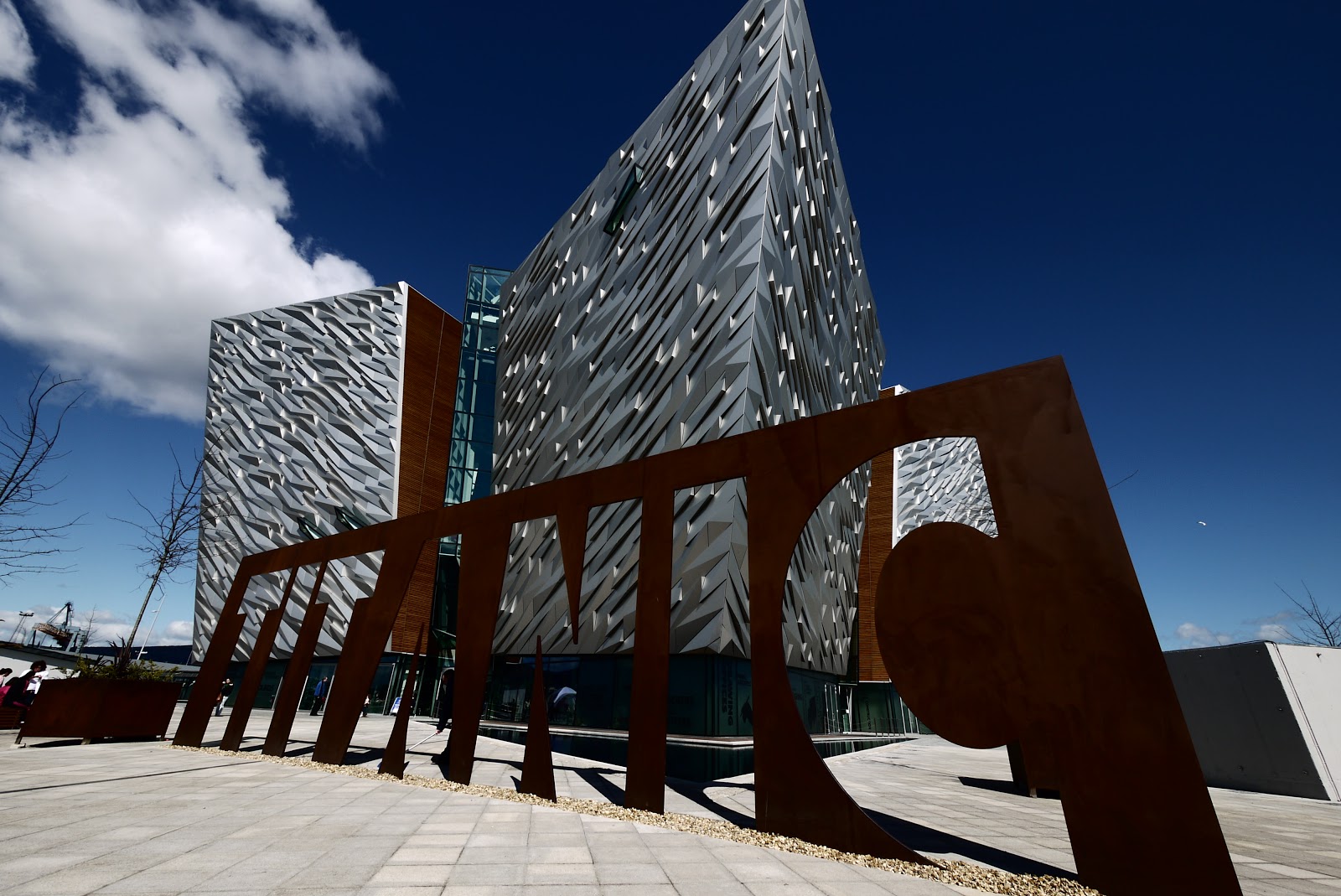 The Titanic Visitor’s Centre was one of several highlights during our visit. The exterior design of the building reflects the scale and shape of the prow of The Titanic whilst the reflective quality of its cladding panels evokes thoughts of the crystalline reflectiveness of its nemesis the Iceberg. It rises up five floors like the decks of the ship. 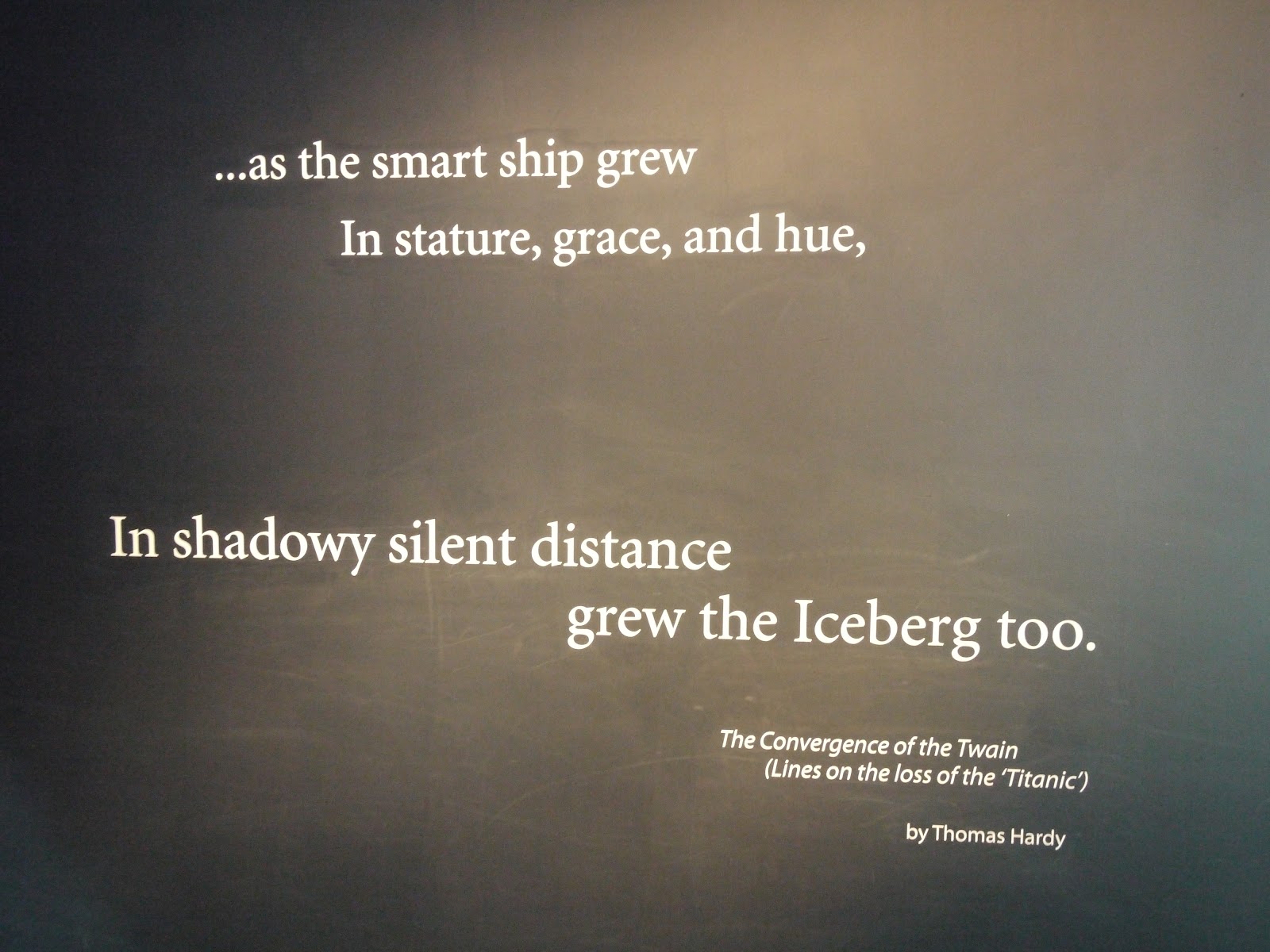 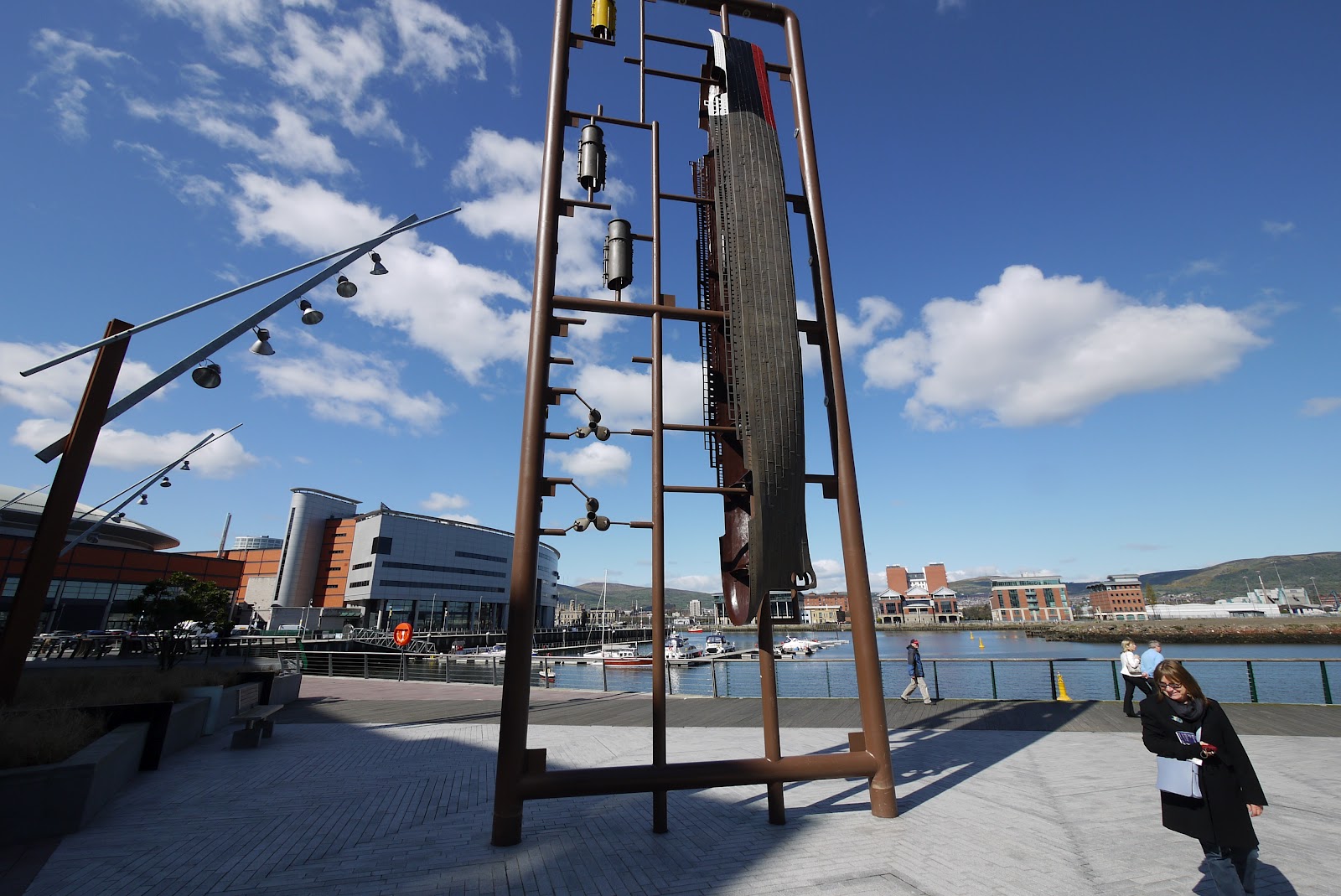 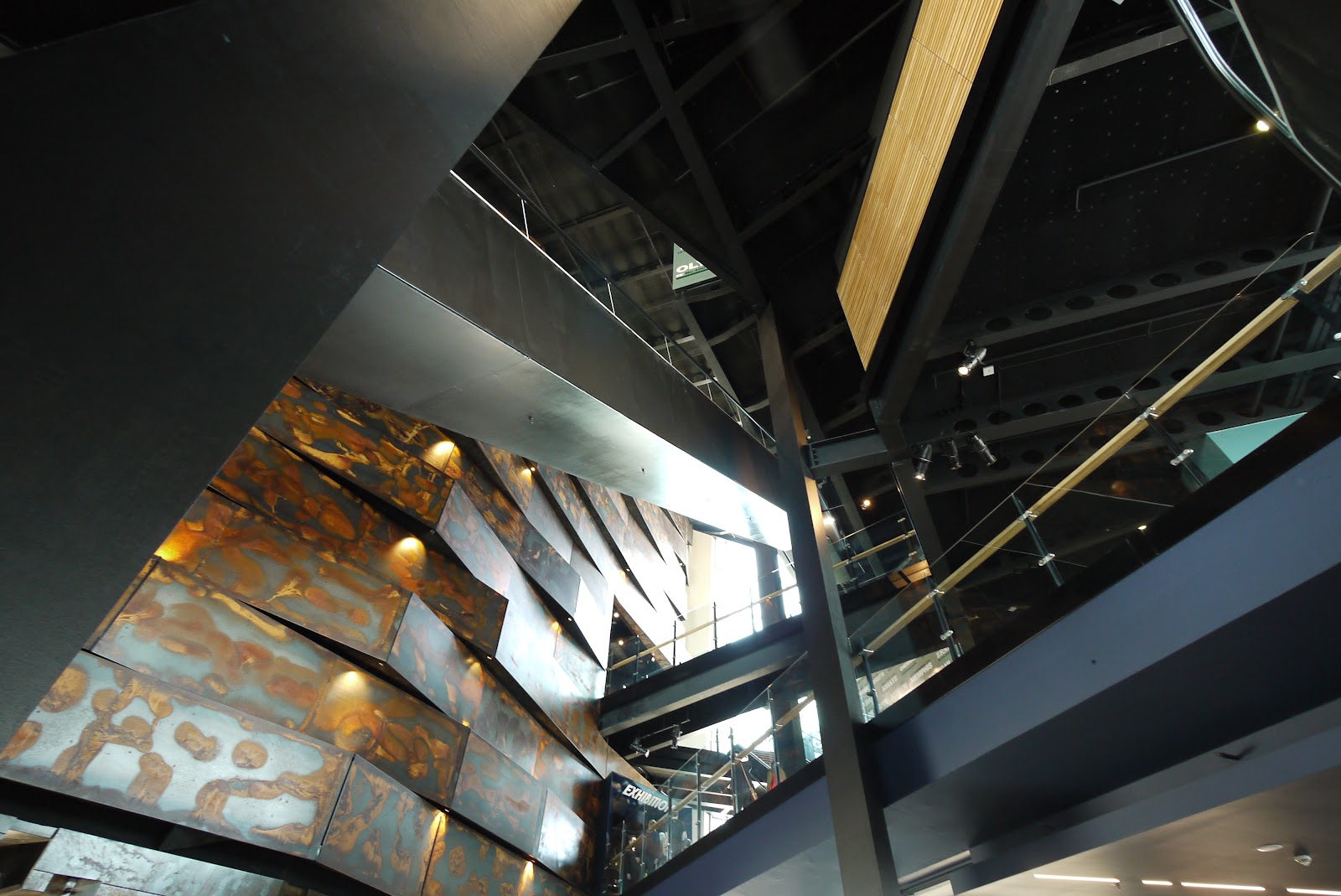 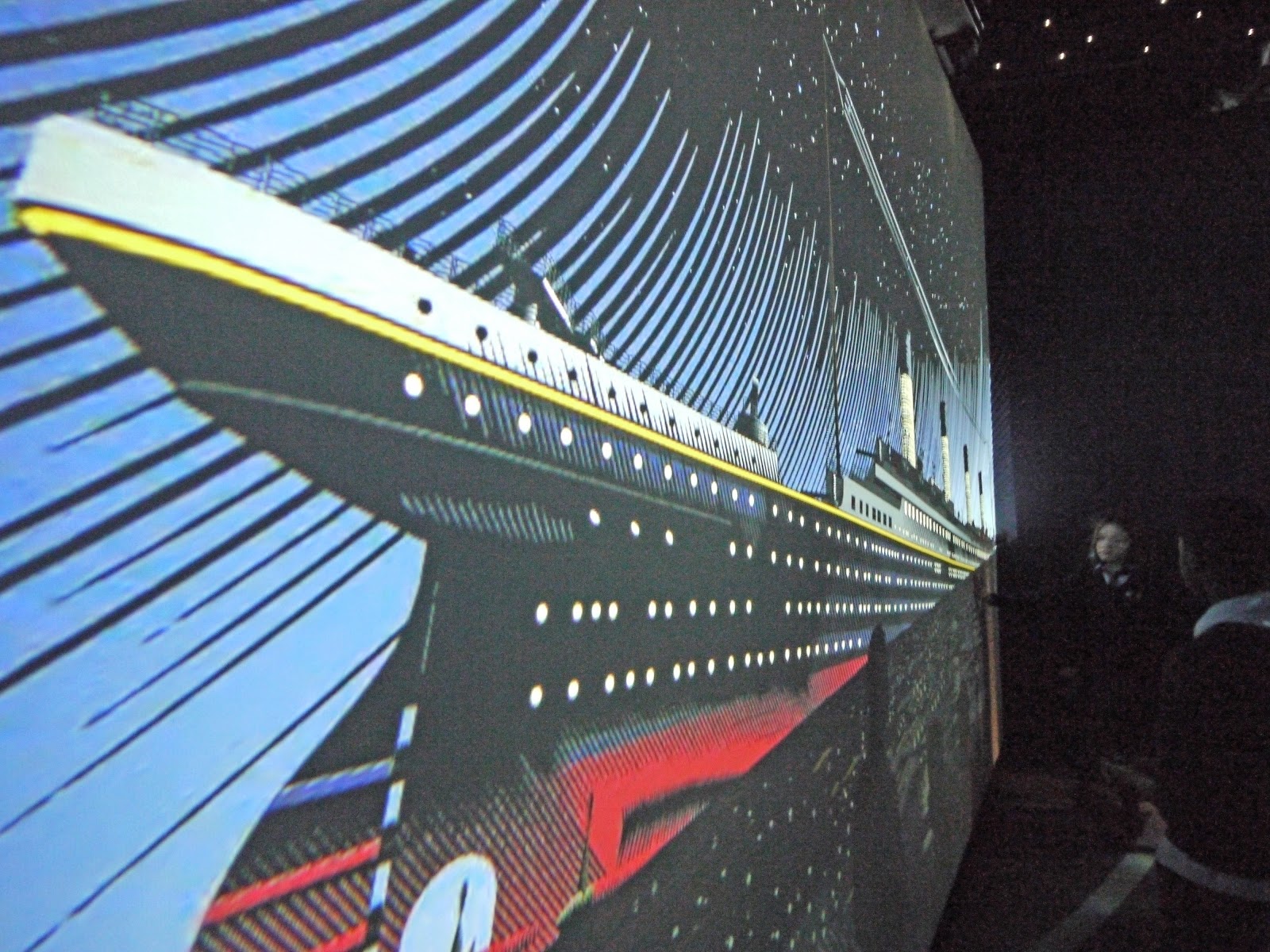 The exhibition gallery on the first floor shows the rapidly changing Belfast of the 19th century with its range of interconnected industries; the displays concerning the linen mills, rope works and the early years of Harland &Wolff are particularly detailed and innovative. Of note are gigantic projected photographs of city locations with shadowy Edwardians moving across them, giving the feeling that you are present in a fabulous gothic city. The second floor includes temporary exhibition galleries and educational facilities. The third & fourth levels are dedicated to the building of the Titanic, laying the keel, framing, plating and riveting, bulkheads and decking and exhibition galleries which are impressive as they show such detail as the magnificent linen cupboard, the sanitary fittings, a drinks cabinet, a first class and third class cabin, behind the scenes on the Titanic and a display that tells the story of the maiden voyage emphasising the class distinctions. 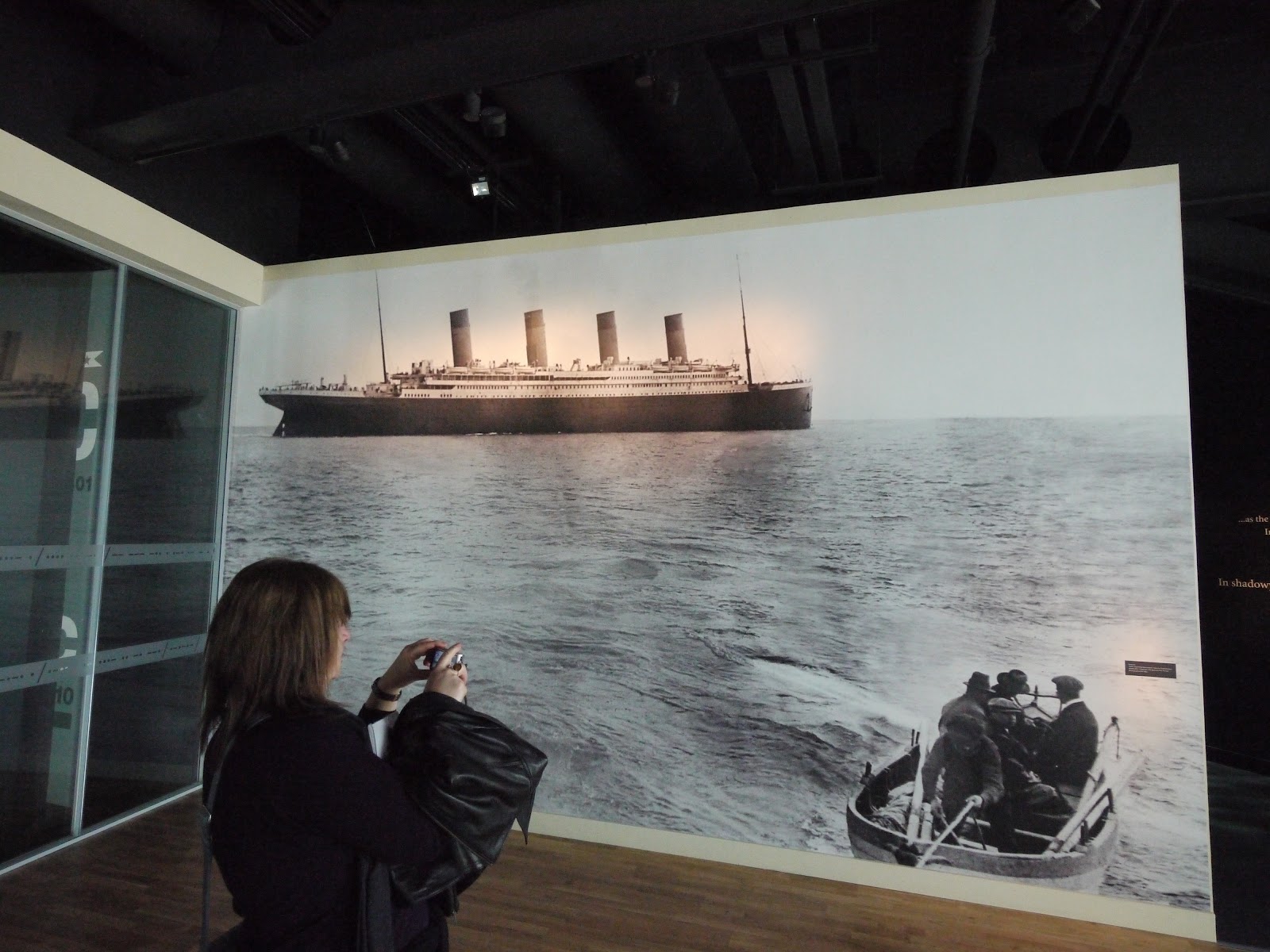 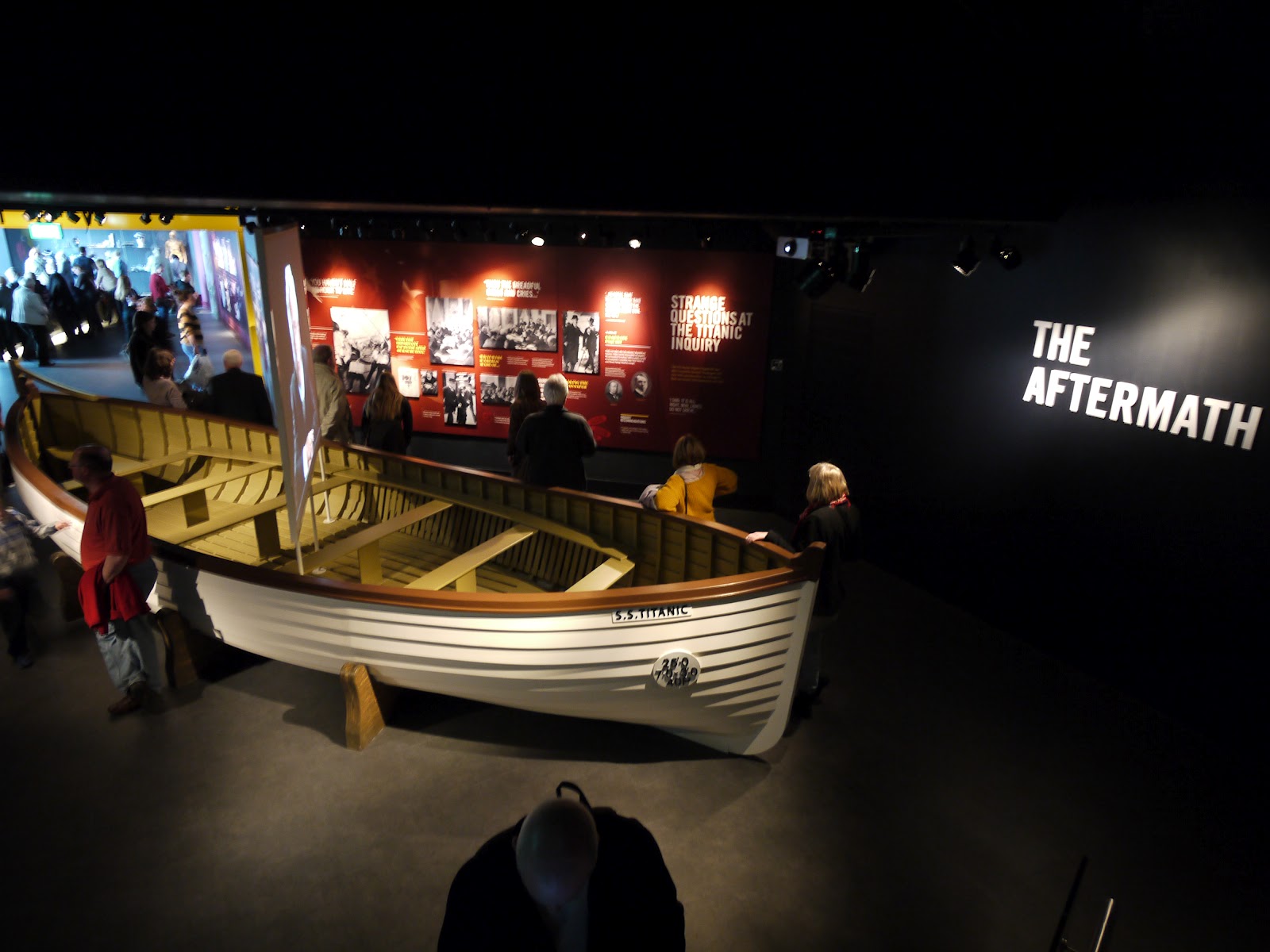 A highlight is an immersive projected computer simulation of all of the Titanic’s decks with the virtual view rising from the depths of the engine room up to the top deck through the various class-defined decks between. Finally, the top floor supports an elegant banqueting hall and hospitality suites. Here the centrepiece is a full sized faithful reproduction of Titanic’s own grand staircase which controversially is only accessible to those who visit as part of a corporate junket.
We allowed the best part of a day for our visit.

On the river in closeby SailorTown we discovered The Belfast Barge, a museum, restaurant, bar and performance space owned and operated by Lagan Legacy, a professionally staffed charitable heritage organisation. Its focus is on the city’s seagoing and industrial heritage. 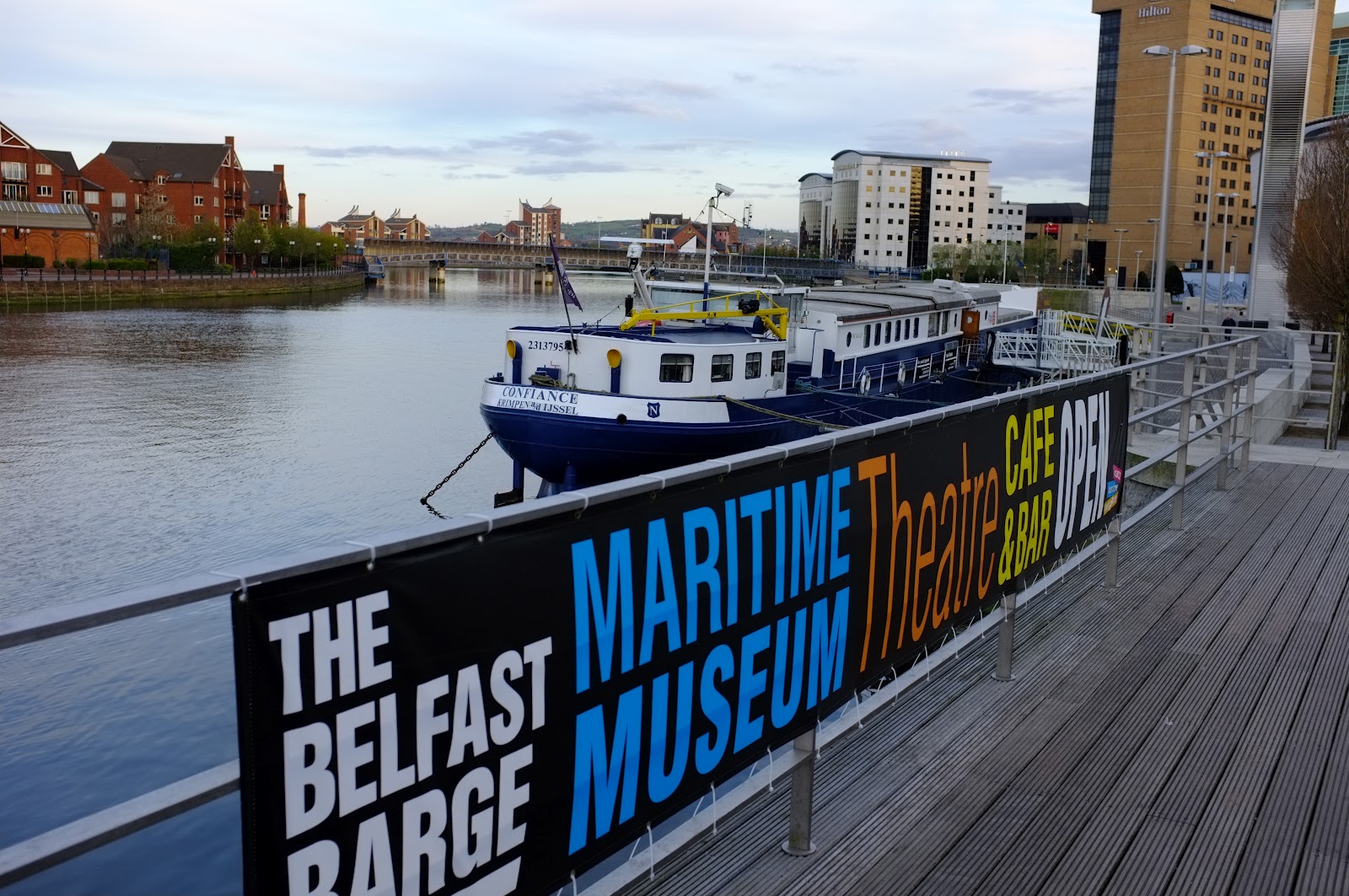 When the shipyards of Harland and Wolff were being demolished for scrap a group of local activists suddenly realised a valuable historical resource was in danger of being lost forever. They managed to rescue the shipyard’s artefacts including such items as blueprints of ship designs and shipyard timeclocks just days before the wrecking balls of the demolition squads wrought their havoc. The fruits of their labours have been preserved on a Dutch barge now moored behind Belfast’s Waterfront Centre. Here they celebrate the diversity of jobs that shipbuilding supported. Rat Killers, Bottom Scrapers, Message Boys, Joiners, Upholsterers, Divers, Rivetters, Draughtsmen, Watchmen to mention but a few. 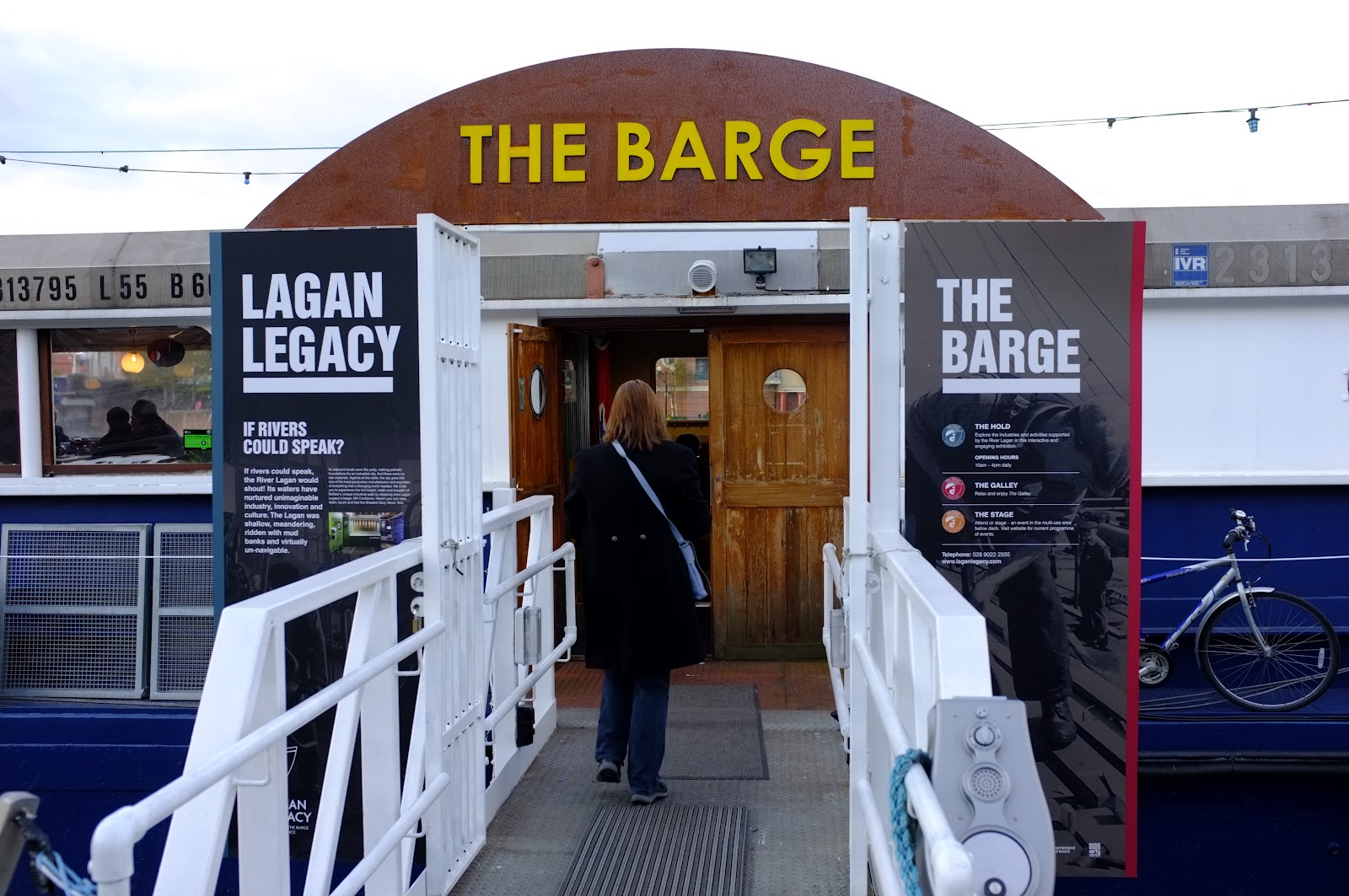 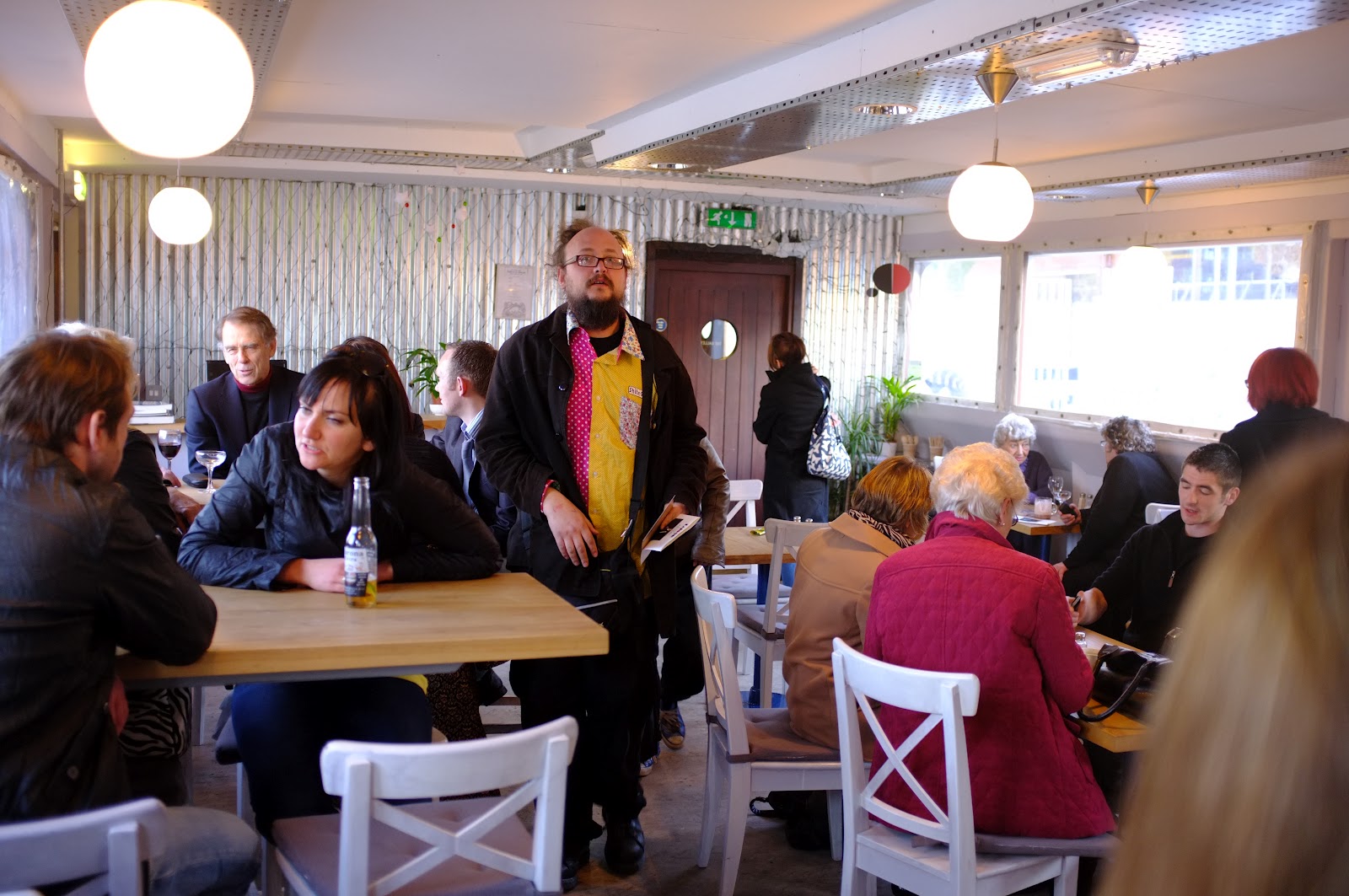 The Barge is a floating memorial to a lost industry. In the bowels of that Dutch Barge they have fashioned a small and intimate perfomance space.

There we watched a short play called A Better Boy written by John Wilson Foster, an Academic who was raised and educated in Belfast and pursued a career in Canadian Universities where he wrote several treatises on the Titanic. In this play,based upon a real interview,which both the character of Sir William J. Pirrie, Chairman of Harland & Wolff has agreed to a newspaper interview in memory of his nephew Thomas Andrews who was the chief designer of the Titanic.

Ironically the interview was conducted in the underwater saloon in the middle of a lake in his residence at Witley Park in Surrey. He recalls Tommy’s childhood, his early days as an Apprentice aged 16 at Harland & Wolff and his last moments aboard the stricken liner. It is a fine play which moves and informs. We learn Thomas kept bees and this fact is used by the playwright to illustrate Thomas Andrew’s care for the fate of the Titanic’s passengers. In evidence to the Titanic Inquiry one of the survivors descibed how those left on the sinking ship were like swarming bees clinging to the decks. A Better Boy personalises the tragedy and deserves future performances in other theatres throughout Ireland and England.

All over the city dinners and events, including the opening of a Remembrance Garden at Belfast’s City Hall marked the Titanic’s centenary. 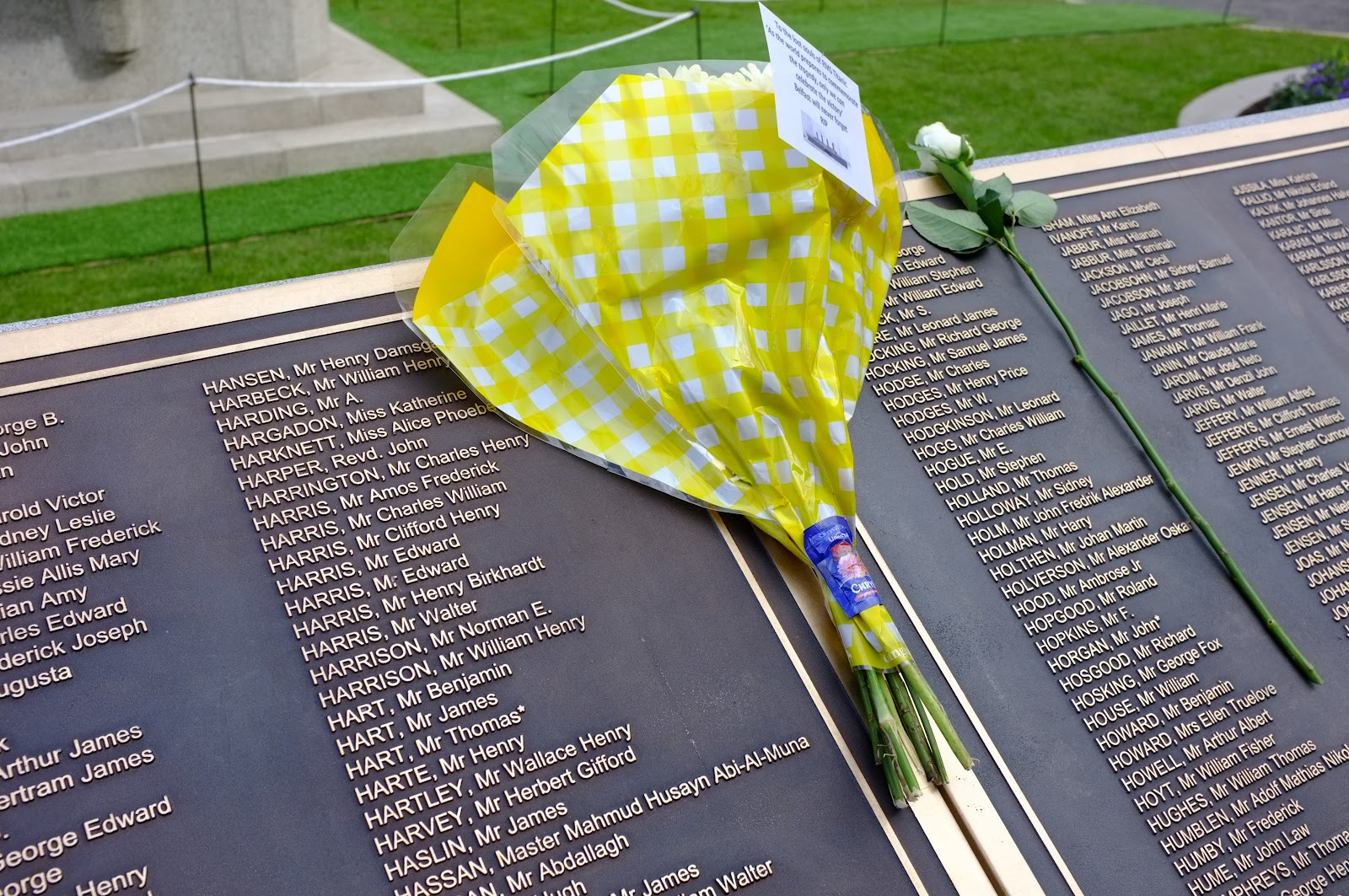 We had dinner at James Street South, a restaurant which aspires to gourmet status. There we had their “Titanic Tasting Menu” which offered a flavour of the food in the 1st class Dining room. Each or the dishes was paired with appropriate wines. The menu included such treats as oyster with champagne sabayon, consomme with scallop, cucumber and celeriac, lamb, peaches in chartreuse jelly, chocolate and vanilla eclairs and petit fours.

As for Van Morrison! He was excellent, as was the atmosphere in the Culloden, a lovely hotel that looks over Belfast Lough. It was a magical evening and one which brought an enjoyable visit to my home city to a fabulous close. 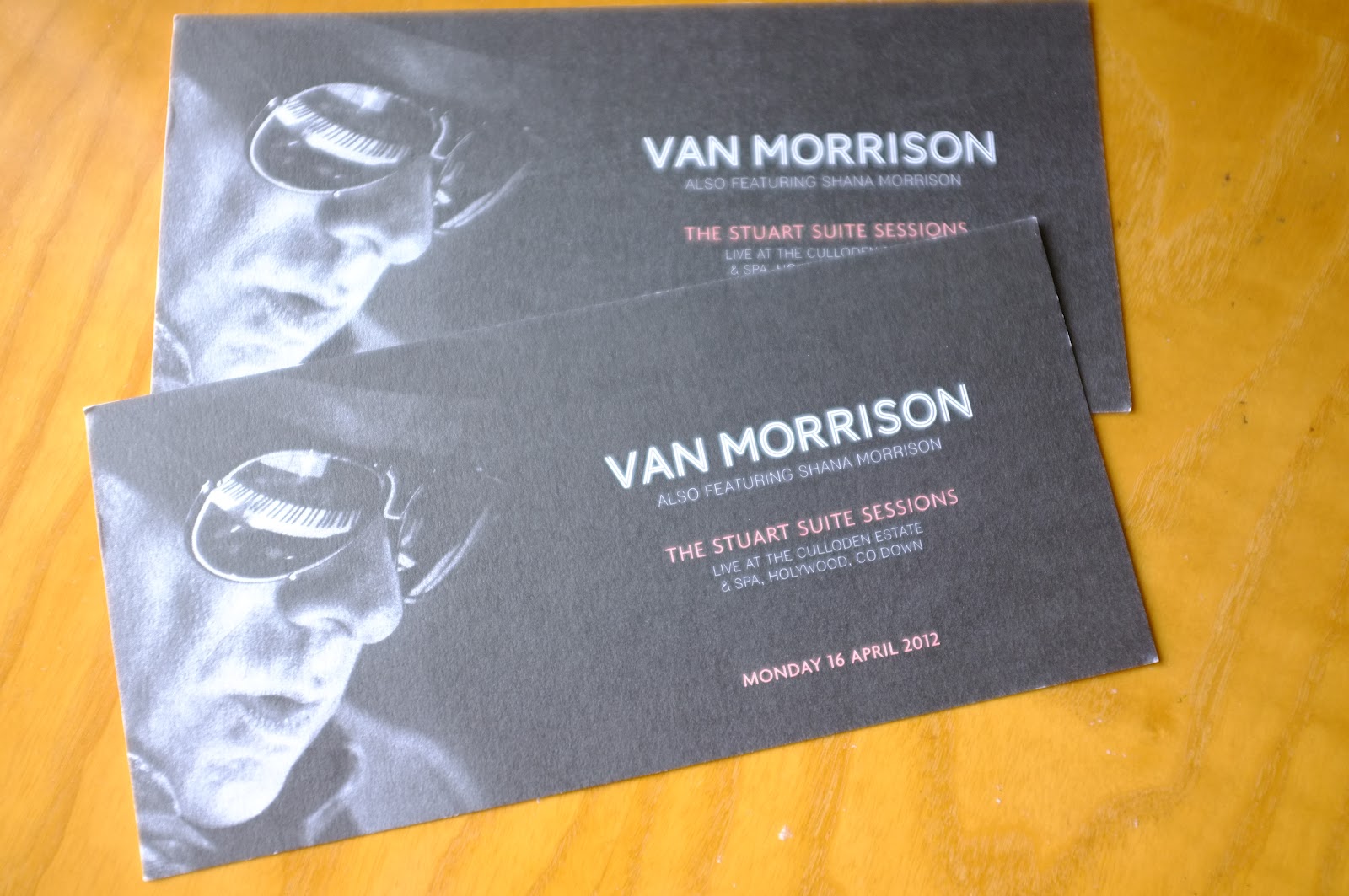 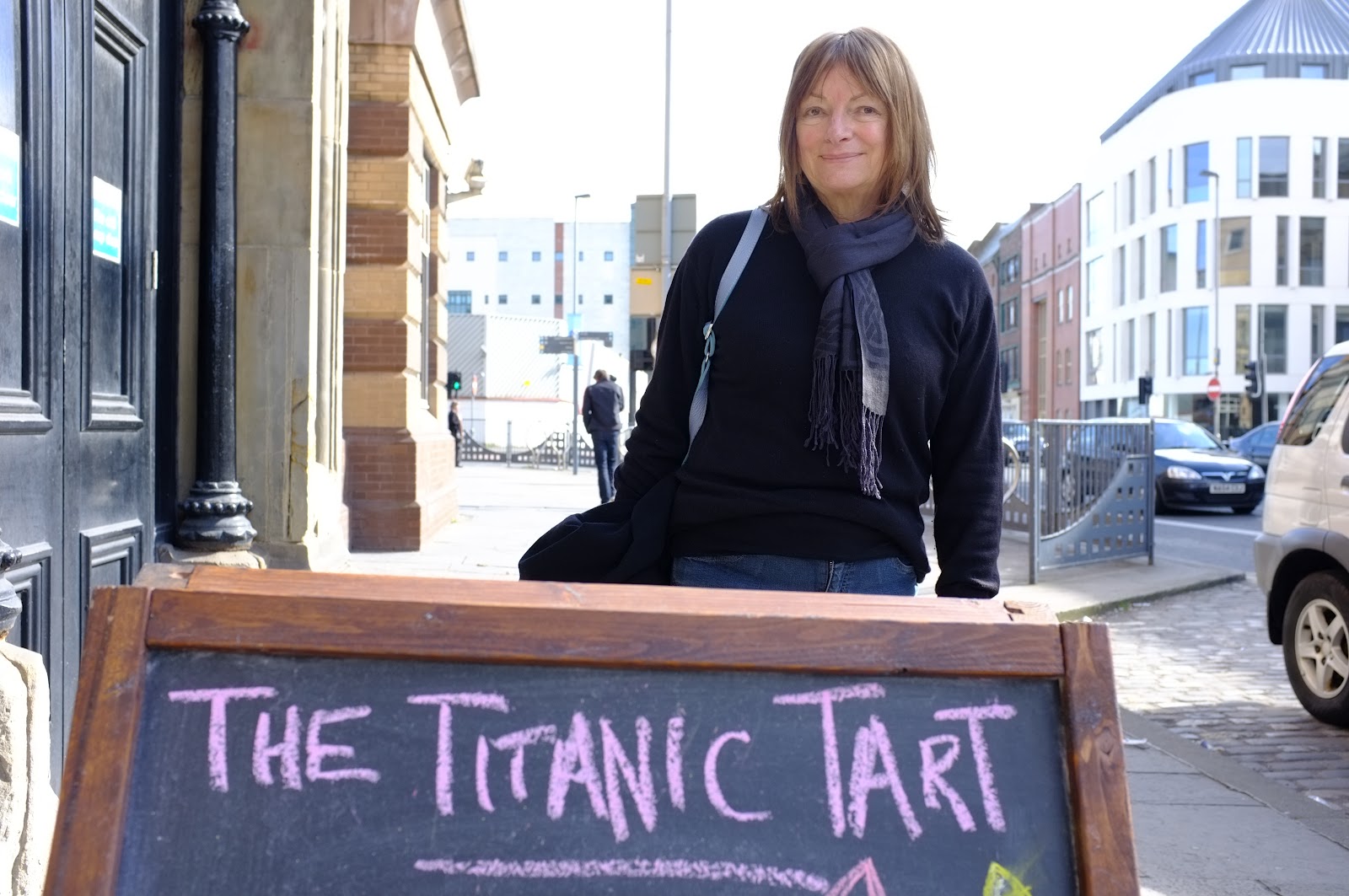