The journey to my current “oeuvre” was sparked to literary life during a stay in the Medieval town of Villedieu les Poeles (literally City of God of the Pans – it’s the centre of the trade in copper cooking pots in Normandy).

On a wind-blown and overcast Autumn day we had visited Bayeux’s Museum where the famous Tapestry spools around a curved wall and within its dimly lighted glass capsule manages in its two meagre,time-faded dimensions to bring to life with immediacy and vibrancy the pivotal moment in England’s story.The story of what for the Anglo Saxon population was a true Apocalyse, a time when all was changed, a time when the Freemen of England fell under the yoke of Norman servitude.

At the time I was working towards a Diploma of Creative Writing at Oxford University, and making my first attempt to write a play for radio. There in Bayeux on that blustery afternoon I found a story. It grew out of a small vignette on the embroidery which depicted two Normans, recognisable by their distinctive punkish haircuts, setting fire to an Anglo Saxon house while the occupants, a woman and child, flee for their lives. The fact that the woman is from the upper classes is evident in the extravagant opulence of her dress sleeves. William’s forces lay waste to the estates and villages around Pevensey prior to regrouping for what would become known as the Battle of Hastings.

Later, I returned to The Burning House vignette and embarked on a novel about Edith SwanNeck, Harold’s handfasted wife and the mother of his children. The research has transported me into the early medieval world inhabited by Edith and her contemporaries. It involved learning Anglo-Saxon, attending history conferences, trawling original souce materials at The Bodleian Library and writing, rewriting and pruning my story of this woman’s survival in the aftermath of war.

Now, I am planning the second novel in the sequence Women of Hastings. So it was that an image hand-embroidered by cloistered women almost a thousand years ago provided the inspiration for me to begin my telling of Edith’s story.

Secrets of The Bayeux Tapestry

The tapestry has not just been the major inspiration for my novel, it is a valuable resource about early medieval England. It is embroidered on a plain linen background in wools of red, yellow, grey, two greens and three shades of blue. There are figures in castles and on horseback. These characters look and point as if they mean to tell us secrets. This is a story of conspirators, of dangerous times and of war that began with dark deeds that occurred a few years before 1066. Only by historical detective work can its secrets be deduced. Not all specialists are in agreement but it is thought that the tapestry was made in conquered England within a decade of 1066. The Bayeux Tapestry is considered to be filled with hidden meaning, a subversive account of the Norman claim to the English throne. It is the story of how a helpless conquerered people attempted to understand what had happened to them.

The House That Burned 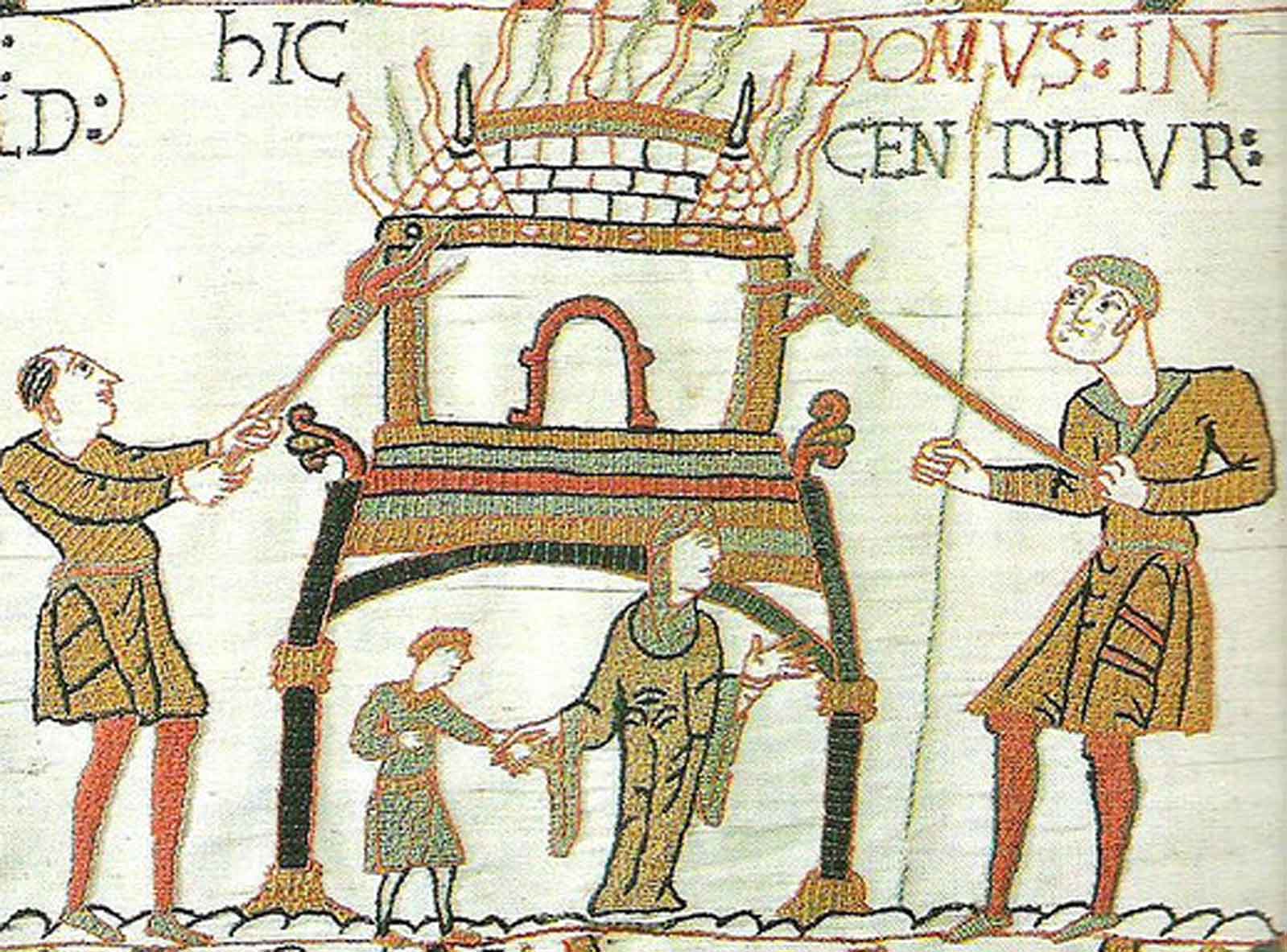 This vignette lies at the heart of my novel. It sets my heroine, Elditha (Edith Swanneck) and her narrative in motion. William had a scorched earth policy before the Battle of Hastings, probably premeditated. The path of Norman rampage may today be traced in The Domesday Book of 1086. A succession of lands in Sussex were devastated and laid waste.There are only three women depicted on the tapestry. Some historians wonder if Edith SwanNeck is the third woman identified on the tapestry. The child, they think, may well be one of Harold’s children. The writing above the vignette states HIC DOMUS INCENDITUR (Here a House is Burned). Although the woman and child are often regarded as representational figures and it is tempting to see them as innocent victims of war, they probably stood for actual people. The only two other women in the tapestry are identified- the named Elfgyva and the unnamed but identifiable Queen Edith. It is, therefore, most likely that the third woman, also in aristocratic clothes, is indeed a real and identifiable person. Here, in colours still bright, fleeing from flames and destruction could be Edith SwanNeck, the heroine of “The Handfasted Wife/ Here a House is Burned”.

If interested in the Tapestry’s Story, I would recommend the following works:

Andrew Bridgeford 1066,The Hidden History of the Bayeux Tapestry.

Carola Hicks, The Bayeux Tapestry, The Life Story of a Masterpiece.