Gunnhild Godwindatter was the youngest daughter of King Harold II who lost his kingdom to Duke William of Normandy in 1066. Around this date, possibly before it, Gunnhild was at Wilton Abbey. After the Norman Conquest many heiresses took refuge in abbeys as King William encouraged inter-marriage between English and Normans. It was one way that made the take-over easier and it often gave unmarried Norman knights the opportunity to claim legal tenure to English lands. 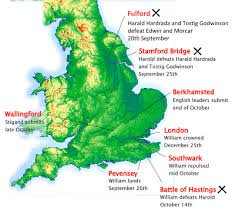 The most engaging story concerning English heiresses is that of Gunnhild. I suggest that she was already as a child being educated in Wilton Abbey in 1066. Her aunt Edith Godwin was patron of Wilton. Many noblewomen went there to learn embroidery for example.There was an embroidery workshop at Wilton where it is very possible that some panels of the Bayeux Tapestry were embroidered, though it was designed at Canterbury. Carola Hicks wrote on this subject with convincing argument. Aristocratic young women received an education there and it is not impossible that Gunnhild was originally at Wilton to learn reading and writing, languages and, of course, embroidery amongst other skills. Equally, Edith Godwin may have had ambitions for her royal niece. She may, according to historian and academic, Anne Williams, have hoped that Gunnhild would become a novice, take vows and aim for the top job, that of abbess. Then in December 1075 Edith, the widow of Edward the Confessor, died, too soon to realise possible ambitions for Gunnhild. 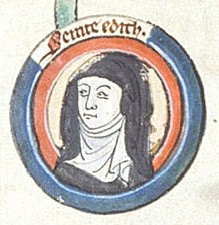 There are two lines of thought about what became of Gunnhild. It is recorded in Oderic Vitalis that Gunnhild eloped from Wilton with Alan of Richmond circa 1089-1090. In this story, Count Alan came to Wilton hoping to court and wed with Matilda of Scotland who was also there to be educated. Failing in this venture, rejected by one heiress, he found himself another heiress, King Harold’s daughter Gunnhild. They eloped and married. Alan died circa 1092, although his death is also recorded as having been in 1089. After his death Gunnhild married his brother. Alan’s brother, Alan Niger, inherited the Honour of Richmond. At this point Anselm, Archbishop of Canterbury, intervened and told her to return to Wilton and that if she did not Alan Niger would be dead within a year. His death is recorded as 1098. Gunnhild did not return to Wilton after all and after Alan Niger’s death a third brother, Stephen, inherited the Honour of Richmond. 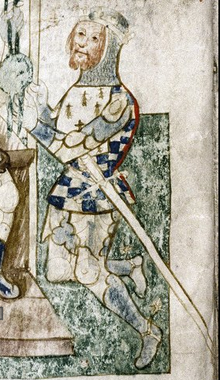 However, there is another take on this story based on recent research. Richard Sharpe writing in Haskins Journal explains how Gunnhild probably eloped with Alan of Richmond in the 1070s. It is plausible. In 1675 a head tablet was discovered near the Norman west door of Lincoln Cathedral. It records the burial of a son of Walter d’Agincourt, Lord of Brittany and Branston in Lincolnshire at the time of Domesday. He, William, was born of royal stock and died while living in fosterage at the court of King William, son of William the Elder, who conquered England. The date given is 1093.

The heirs of noble families were often drawn into the king’s Curia for their education. William’s father, Walter D’Agincourt, married a certain Matilda who gave gifts of land to the Cathedral. Most of what Matilda gave was, in fact, owned by Count Alan. Count Alan had vast lands in Yorkshire, Suffolk, Essex, Cambridgeshire according to the Domesday Book. So how could she gift lands that he had title to unless, of course, Alan of Richmond was Matilda’s father. The answer lies in the Anselm letters of 1093. This is a correspondence between Archbishop Anselm and Gunnhild on the subject and probably not concerning the first marriage but her second.
﻿ 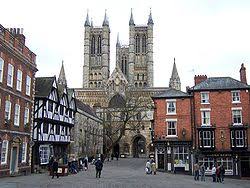 Count Alan built up his lands but how is not recorded. He is buried at Bury St Edmunds. In 1086 his holdings made Alan the fourth largest landowner or rather lay tenant in England. Richard Sharpe suggests that Alan Rufus of Richmond may have died in 1089. Gunnhild had never professed but Anselm treats her in the letters as a lapsed nun. Her duty was to return to the cloister. In 1073 Archbishop Lanfranc had ruled that Anglo-Saxon women who had at the time of Conquest protected their chastity by retreating to convents, should make a choice to become professed nuns or leave the convent. Gunnhild may have left Wilton around the time of this ruling. 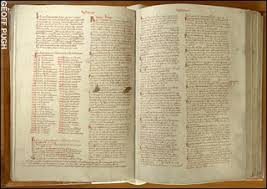 Gunnhild’s mother, Edith Swanneck, had lands which after Conquest, certainly by 1086, were attributed to Alan of Richmond. Land holdings were legitimised through marriage. If Count Alan married Gunnhild he would have legitimised his succession to her mother’s estates. Count Alan’s relationship with Gunnhild might have begun when he had received only a little of his great lands ie. before 1075. If they married in 1075 their daughter would have just about been old enough to have married Walter d’Agincourt by the late 1080s. Matilda could have received property from Count Alan, her father, lands that may indeed have come from her grandmother Edith Swanneck. These lands are, as stated above, in his possession by Domesday 1086. The boy, William, who was buried by the west door of Lincoln Cathedral in 1093 was recorded to be of royal lineage. This means he could have been the great grand-son of Harold II who died losing his kingdom at Hastings. I have no real proof but Richard Sharpe’s theory is appealing.

I have used this theory for my new book, The Winter Countess, working title. I have set the marriage and elopement a little later than the date posited by Richard Sharpe as 1072. I suggest 1075 after the death of Edith Godwin. It is a riveting story to work with, and, as ever, with historical fiction it is a question of animating history and sometimes posing ideas that make the reader think about these possibilities. It is impossible to know what Gunnhild really thought or indeed what really happened. But it is a fascinating story that can reveal much about the secret lives of women in a time when women were shadows in a corner.