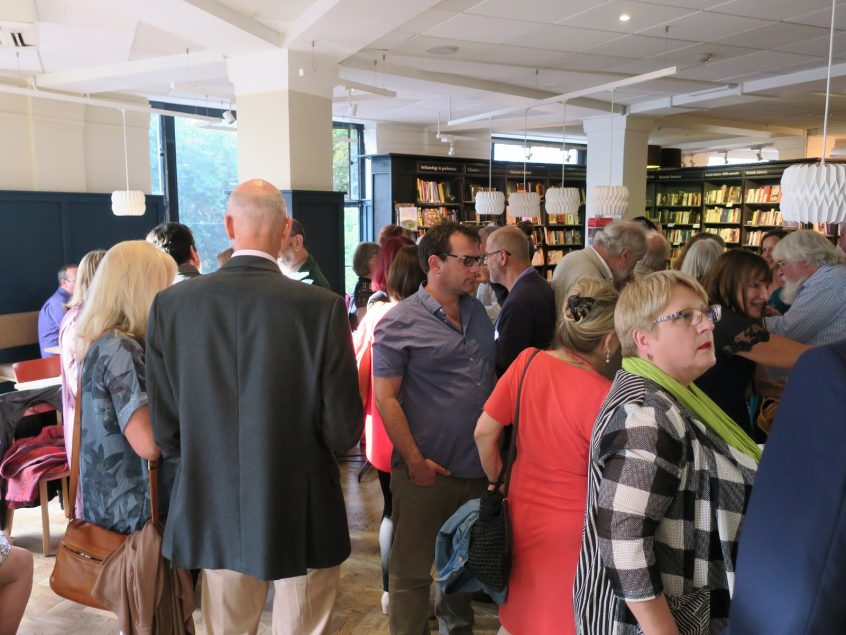 On the 4th August The Woman in the Shadows was published. The launch party was held in Oxford Waterstones on publication day and was attended by over seventy guests. It was a pleasant evening with sunshine pouring in through the long windows of the second floor restaurant. You can see my publisher, Hazel Cushion, in the first picture. She is the lady wearing the green scarf. 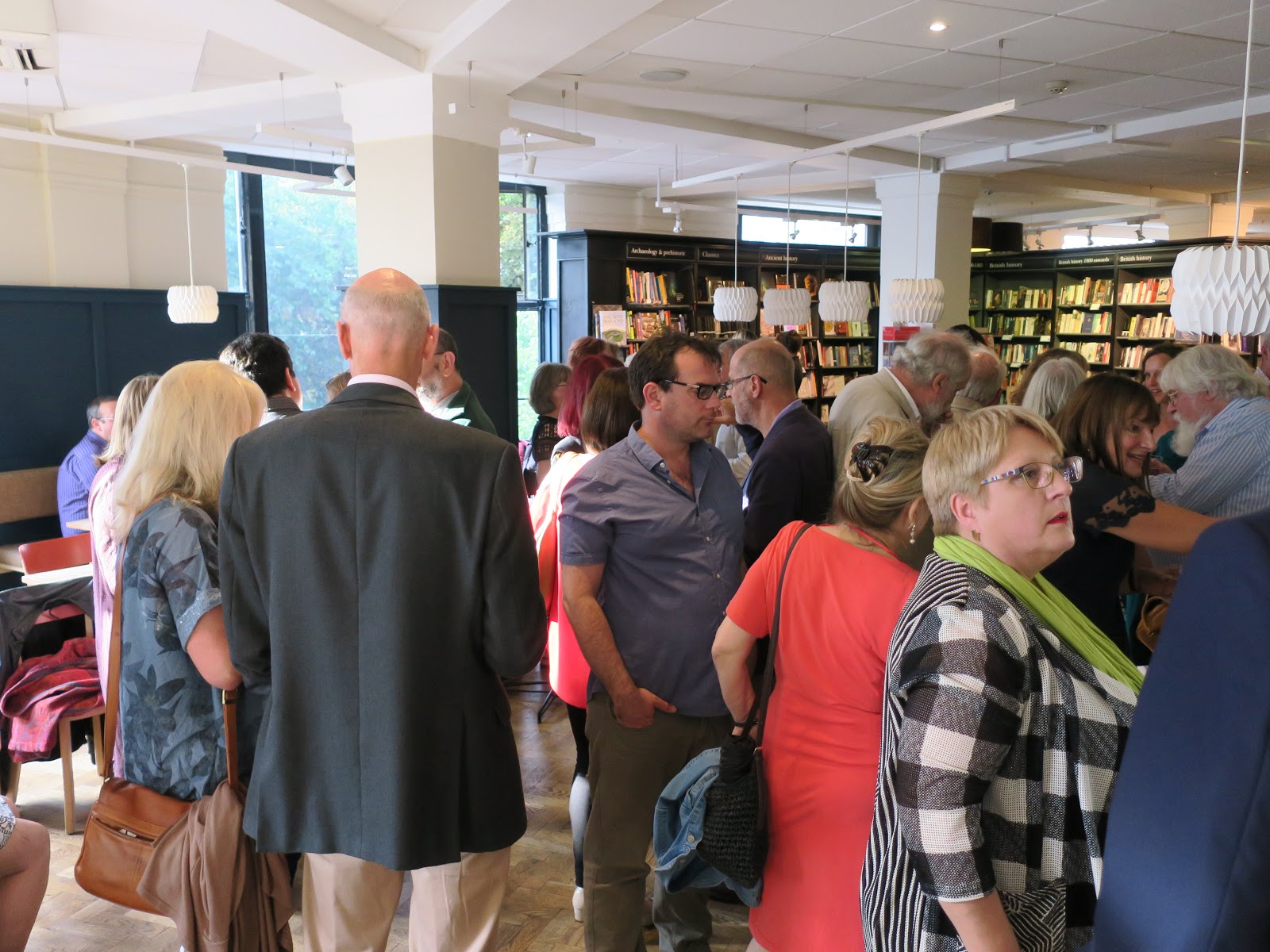 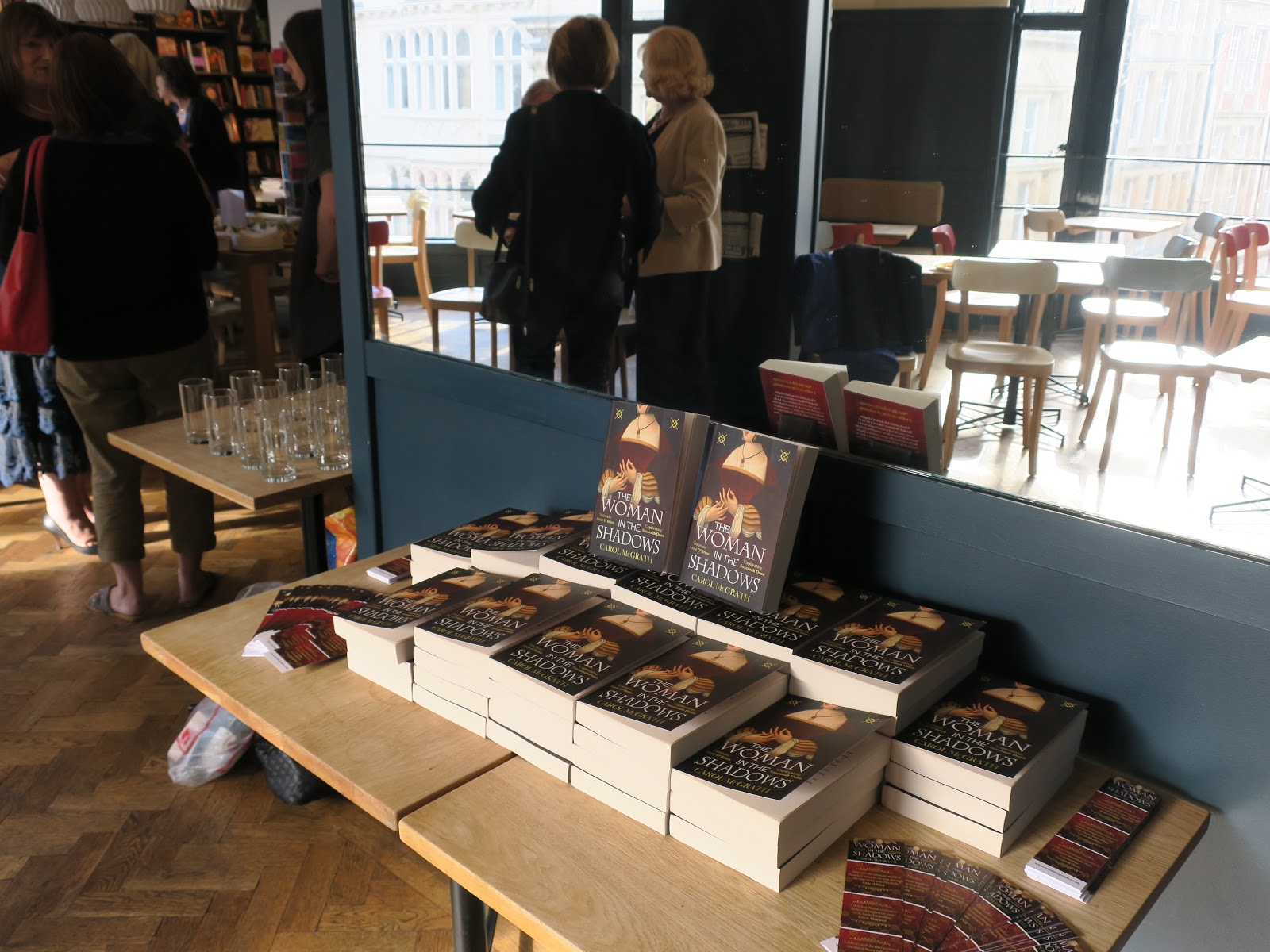 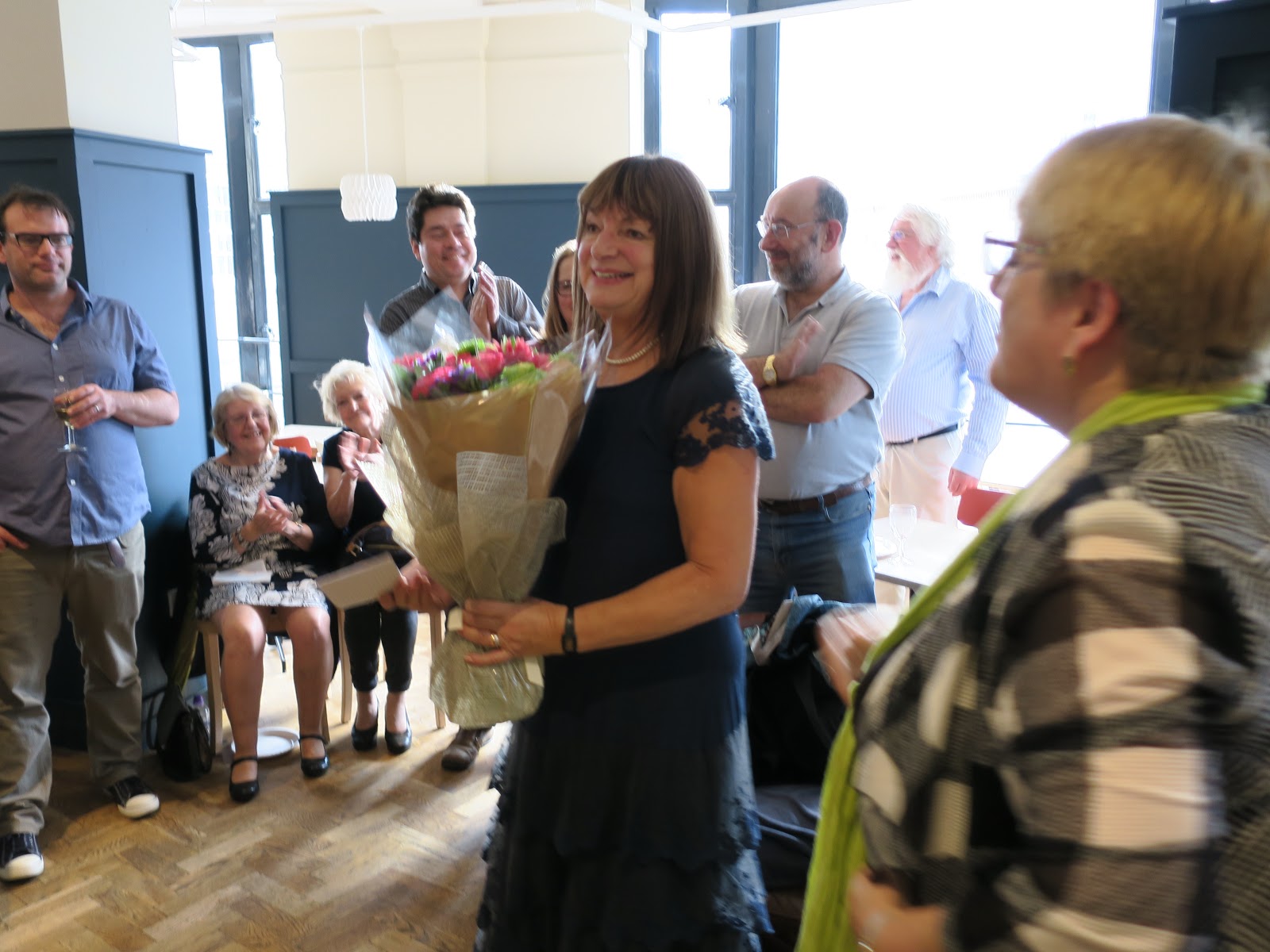 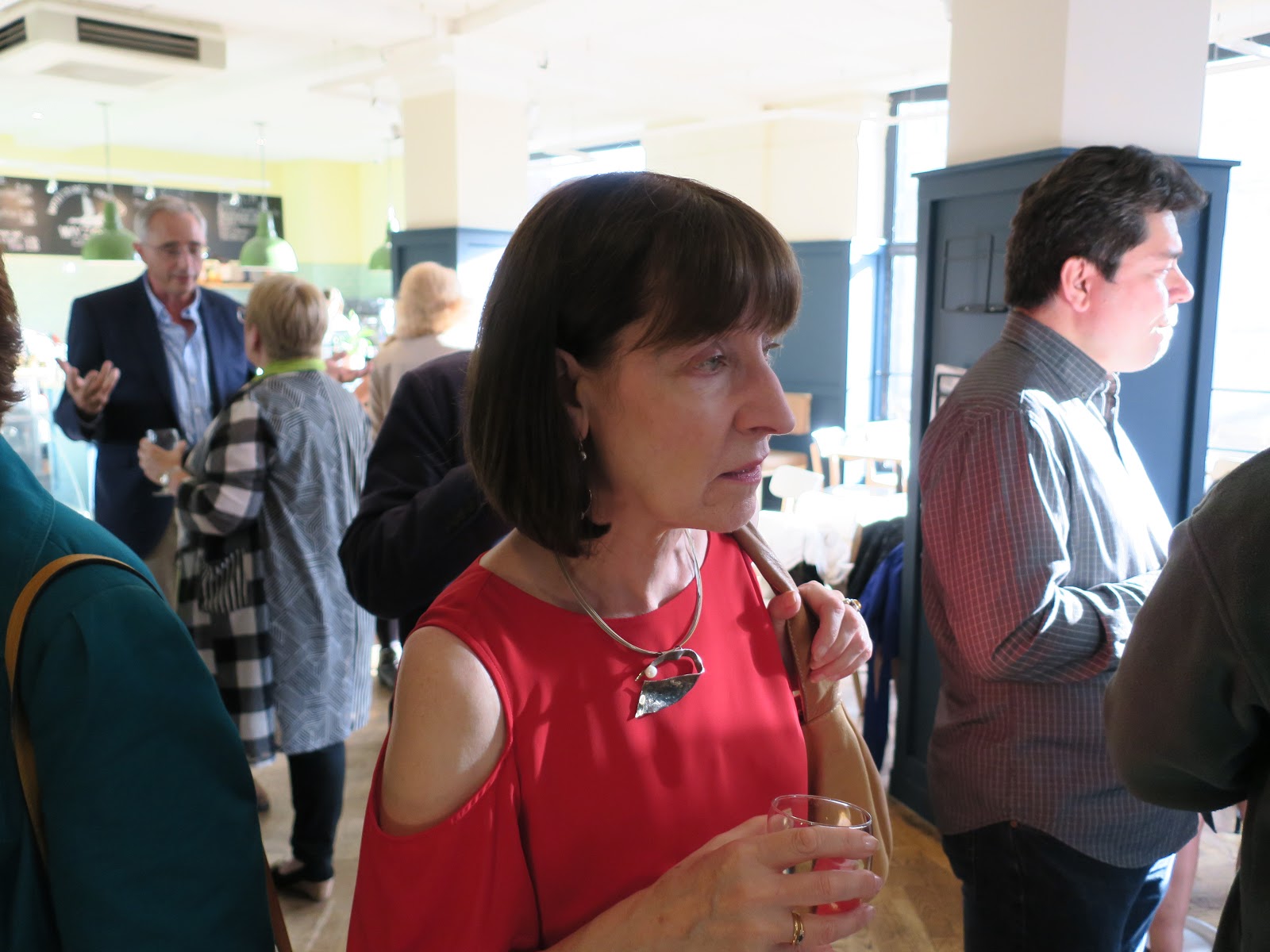 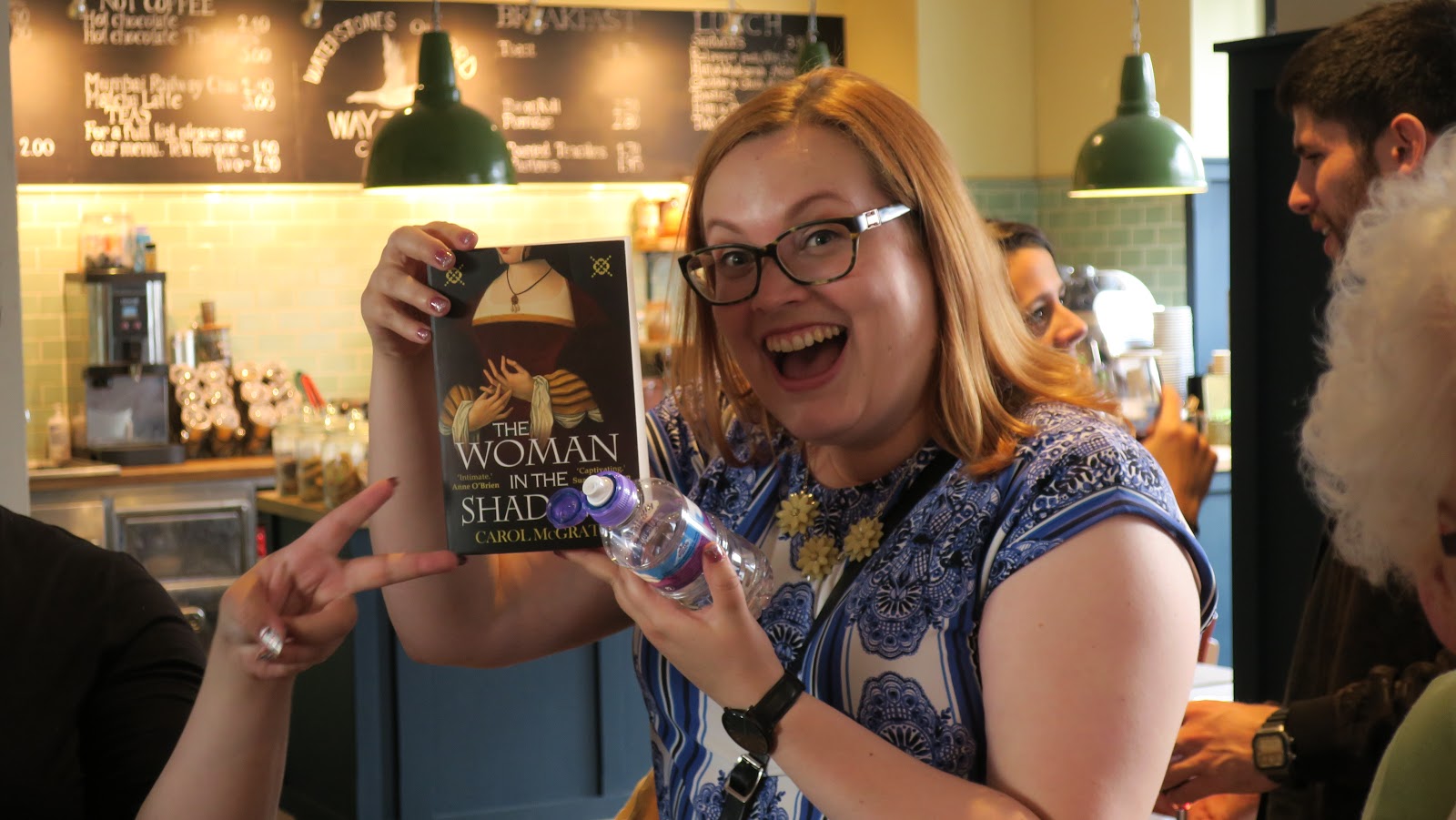 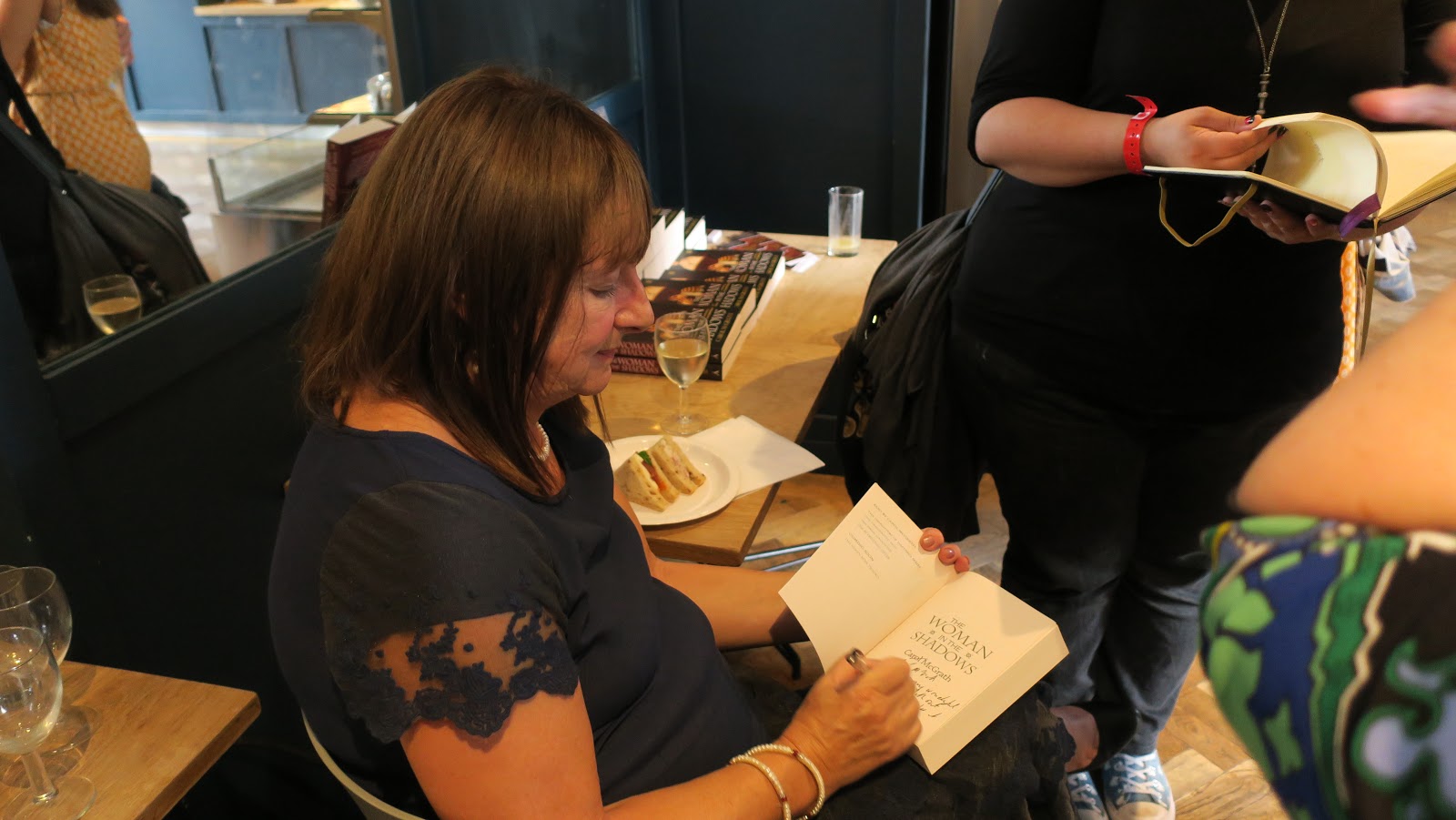 Red and white wine flowed, pretty sandwiches were demolished and for me it was not only thrilling to see the publication of my novel about Elizabeth and Thomas Cromwell and their world of Tudor London but to celebrate its outing with family, friends and representatives of the book world including my publisher and publicist, Karen Bultiauw, from Accent Press. It was an opportunity for me to explain why I wrote this novel and a little about its protagonists.
What follows are words extracted from my introduction to the novel. I resisted reading because, frankly, just read it for yourselves. 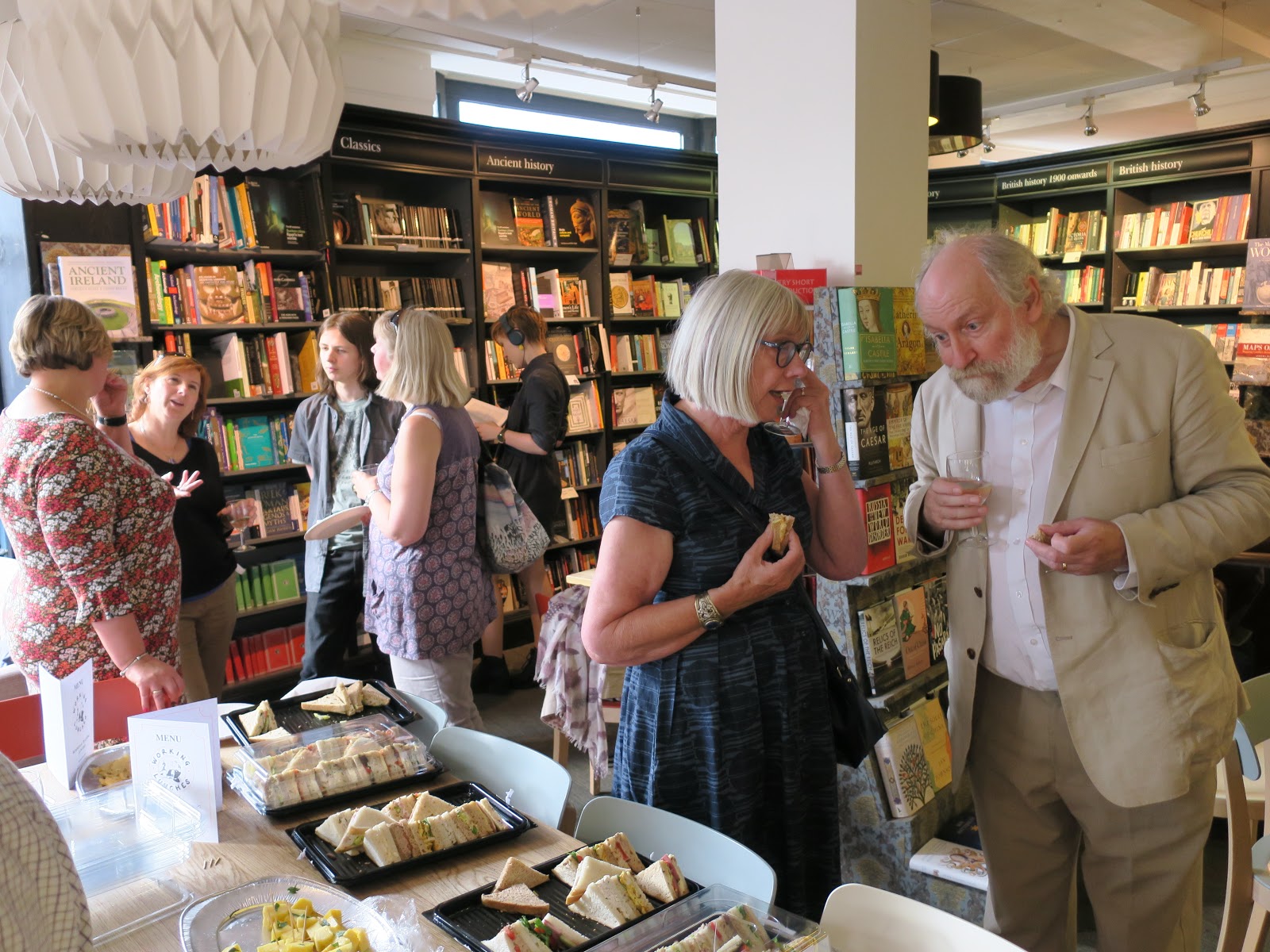 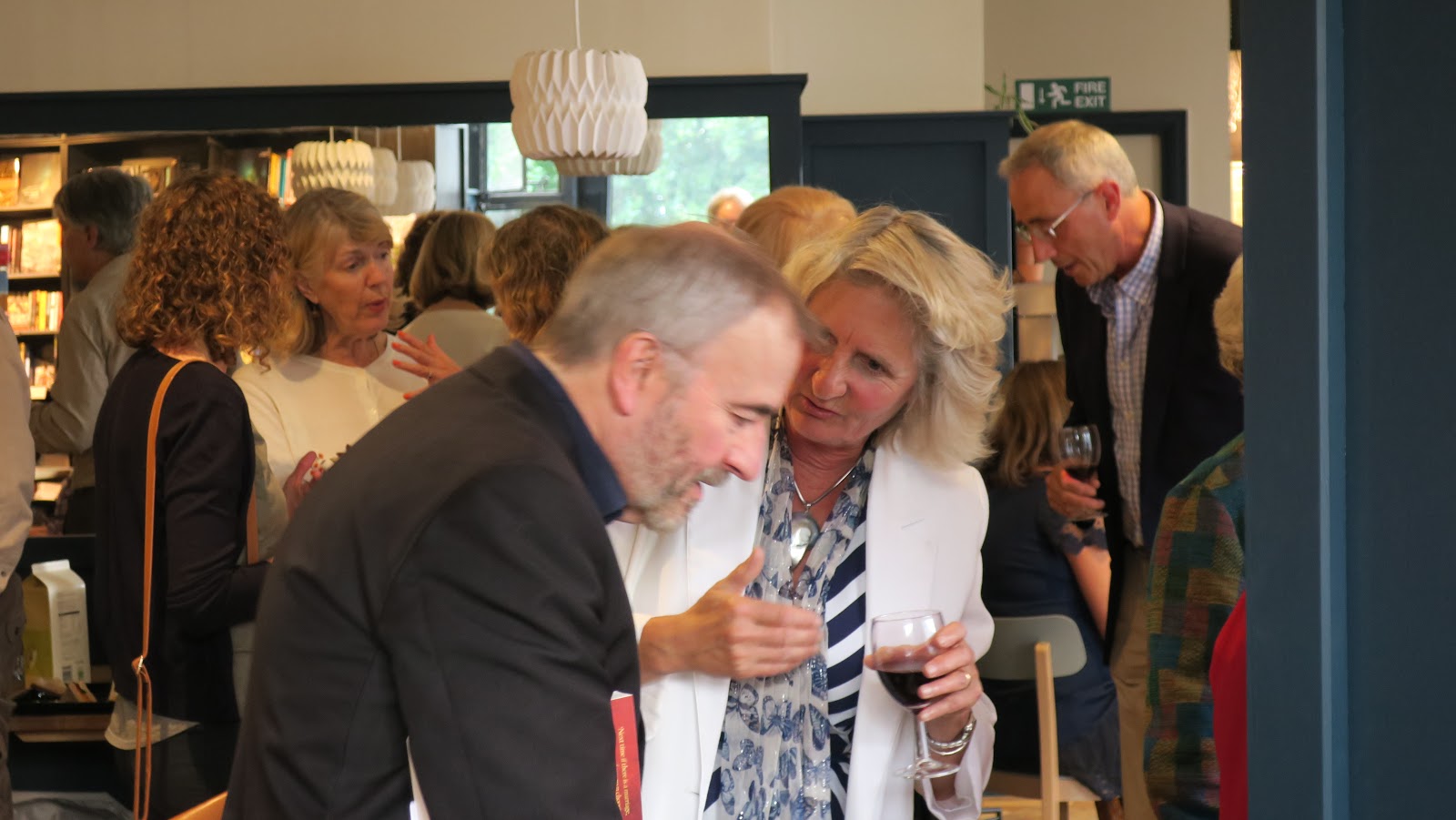 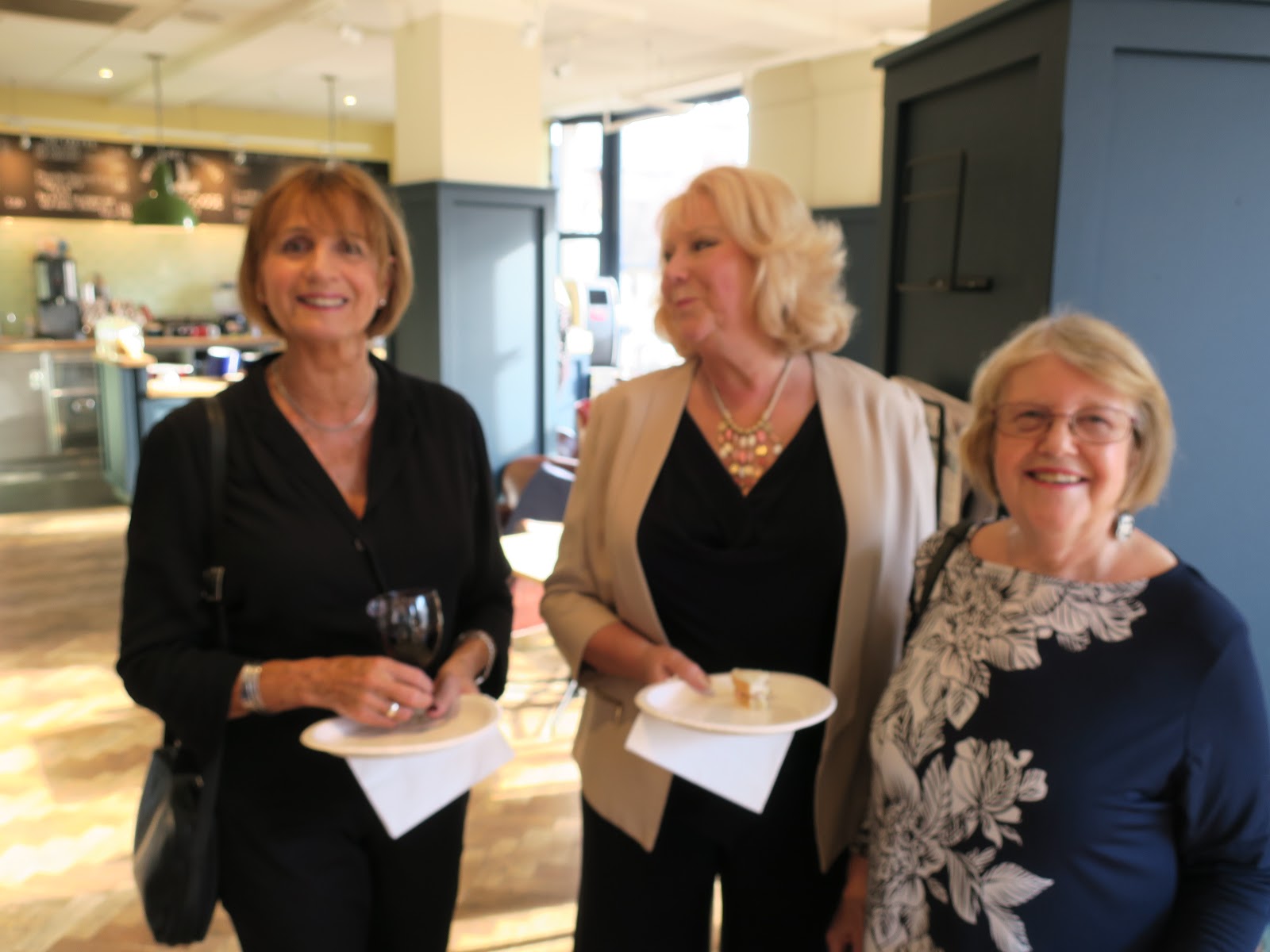 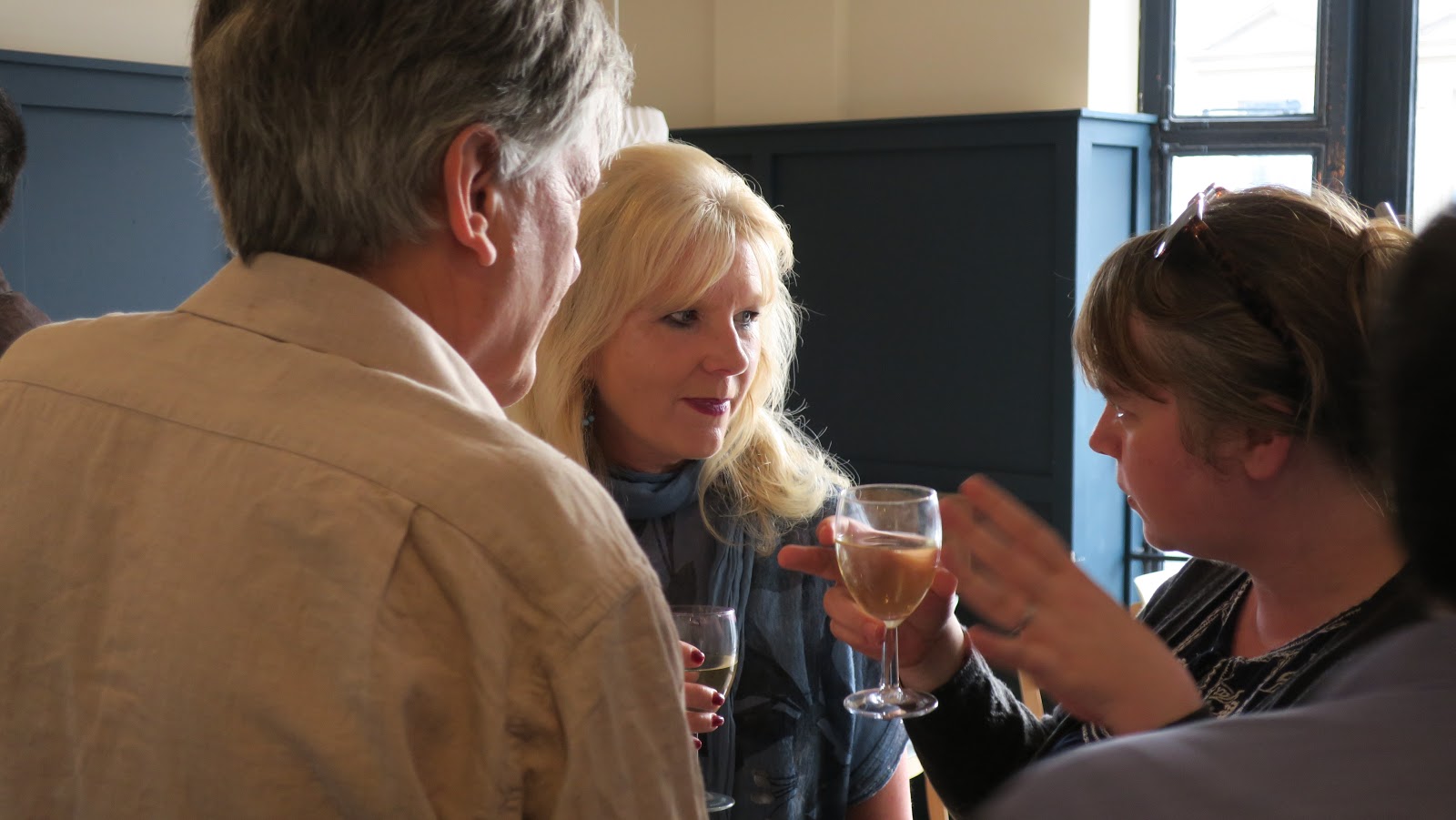 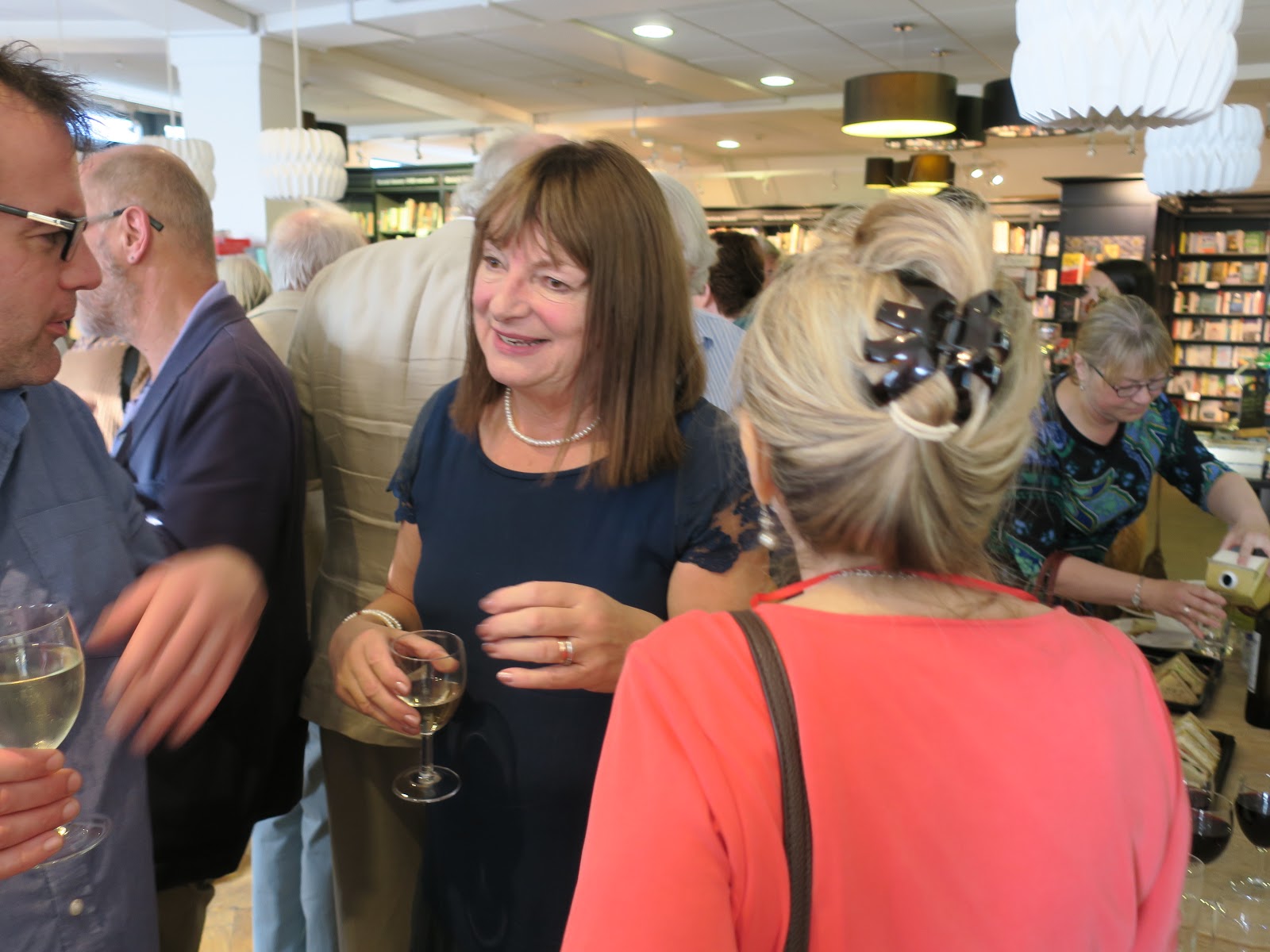 Historical Fiction is I believe about telling a great story and recreating the details of life lived in a past era. It can also be new angles taken on well-travelled stories. I particularly enjoy exploring a woman’s position in History, those women who haunt History’s shadows. My novels are about bringing historical women, real and imagined out of the shadows. A part of Elizabeth Cromwell’s story is rooted in fact but a part is also about putting flesh on the skeleton and how I imagined this woman who was married to Henry VIII’s famous statesman.

Was I brave to write in the shadows of Hilary Mantel? I do not assume my writing to be as praiseworthy or as prizeworthy but I have indeed come at this story from a different angle. I was curious about Thomas Cromwell’s domestic life and the possible dramas that lay within it.

The Woman in the Shadows is not a book about Thomas Cromwell and King Henry’s court, nor is it about The King’s Great Matter, his divorce from Catherine of Aragon. The King, Thomas Wolsey Anne Boleyn do not speak in this novel. They dwell in its shadows. It is about a young widow from the merchant class who saw noblemen and noblewomen as potential customers for her finer fabrics. Once she marries Thomas Cromwell her life begins to change. This novel is concerned with him before he became a player in politics. Seen through her eyes he is ambitious, a little secretive, radical in his religious views, and devoted to his family or is he? She is a modest, religious and spirited woman married to a man with a phenomenal memory and a secret or two.

There are not many facts about Elizabeth. I worked with the few I did discover. She was a wealthy widow. Her family were cloth merchants. Like the Cromwells, she lived in Fulham. They married circa 1514, had three children and were upwardly mobile. By 1517 Thomas was working as a steward at York Place for Cardinal Wolsey, a position he got through family connections and his ability. He undertook legal work and as the family became wealthy they moved from a home in Fenchurch Street to a choice neighbourhood by Austin Friary. Their close friends were intellectuals and often Italian merchants.

Around these facts I constructed a possible life for Elizabeth. She loved her garden, her children, fabrics but she could make mistakes. She, like many other merchant wives supported Catherine, the Queen, but Elizabeth, too, guards a secret that sets in motion a series of events which are not fully resolved until the story draws to a close.

To read the book, look for it on amazon via this link.The Woman in the Shadows

The Woman in the Shadows is also available on amazon.com and from all good bookshops. 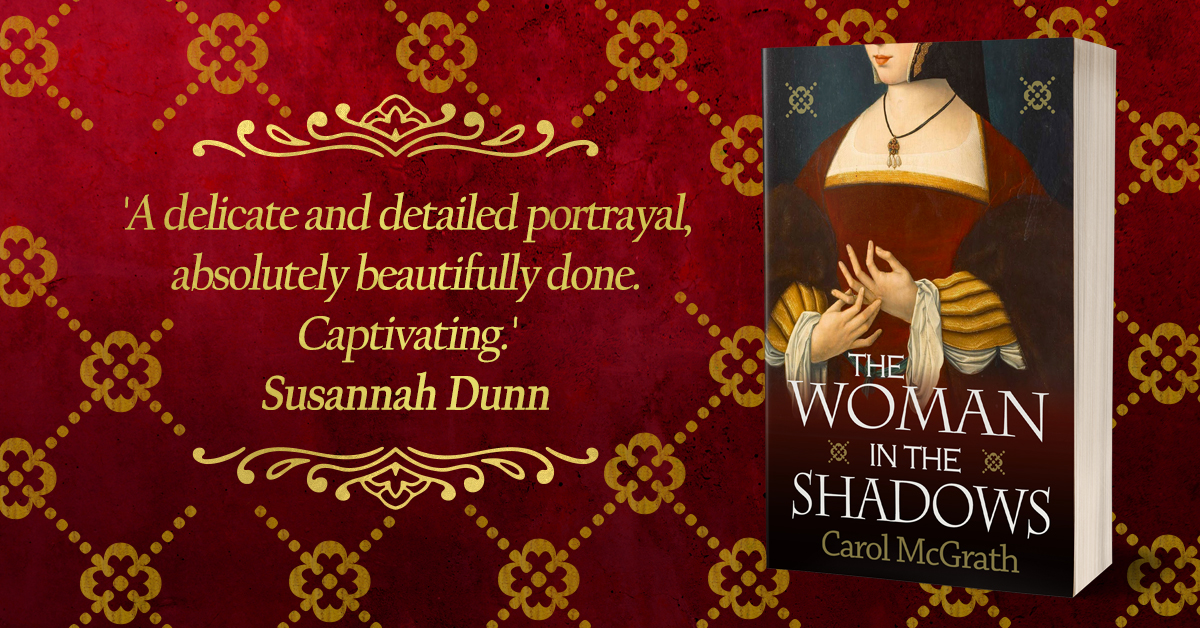 Finally, my thanks to all who came and made this a fabulous evening and to the Oxford Waterstones Staff who were headed by Holly. They were a delight and they helped make this launch a great celebratory party.