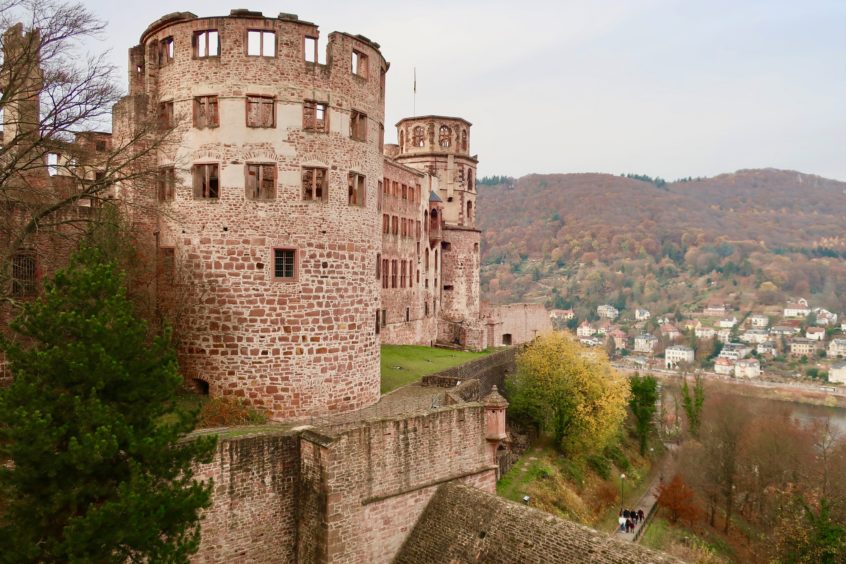 I have always admired the writing of Paddy Leigh Fermor. He lived in Kalamitsi a short distance from the village in the Mani where I base myself during the summer. I never did get to meet him but  have twice visited the villa he designed himself and part constructed with the assistance of a Greek friend who was a local builder.

My first visit was shortly after his death while it still held the manifest redolence of his long intrepid life, personal photos, military memorabilia and the eclectic artwork he collected during his lifetime. The second visit was last Autumn after necessary renovations had been carried out by The Benaki Museum with the support of the Stavros Niarchos Foundation. Inevitably this resulted somewhat in the loss of the aura of the man that previously had seemed to have been inured into the very fabric of the building.

It is still a magnificent memorial to a great Hellenophile, a British War Hero and a writer of unique talent. My introduction to his writing was in the early Eighties when I read his breakthrough book A Time of Gifts which to quote the back of my 1978 Penguin edition – “Like a tramp, a pilgrim, or a wandering scholar, an eighteen year old boy set out, one wet December day in 1933, to walk to Constantinople”

A few years ago, not on foot, obviously, I retraced his visit to Heidelberg and the Red Ox Inn which today looks remarkably similar to his description of it dating back as it does to 1933. This Blog records in pictures that visit combined with Paddy’s original prose. Enjoy.

On the far side of the bridge I abandoned the Rhine for its tributary and after a few miles along the Neckar the steep lights of Heidelberg assembled. 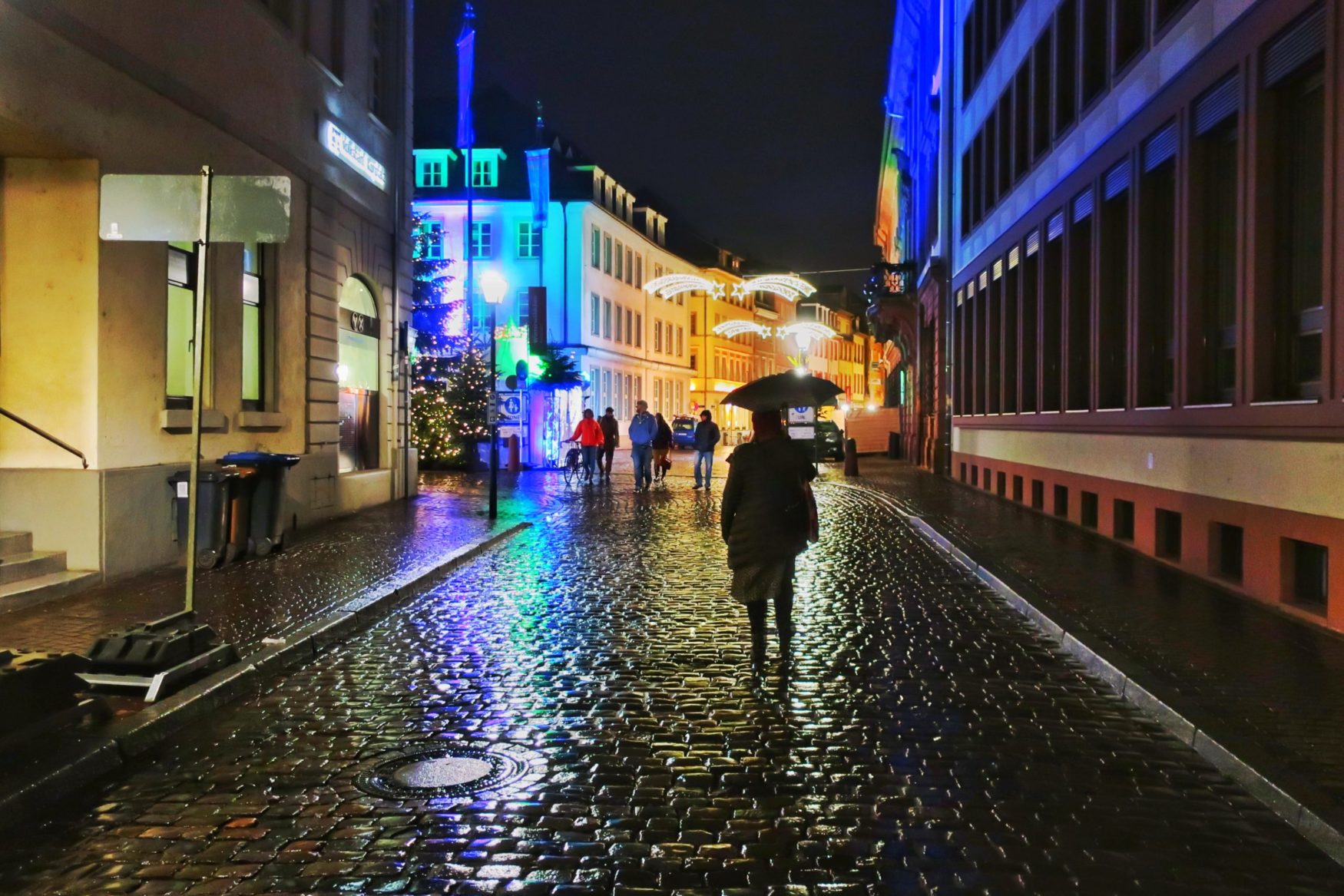 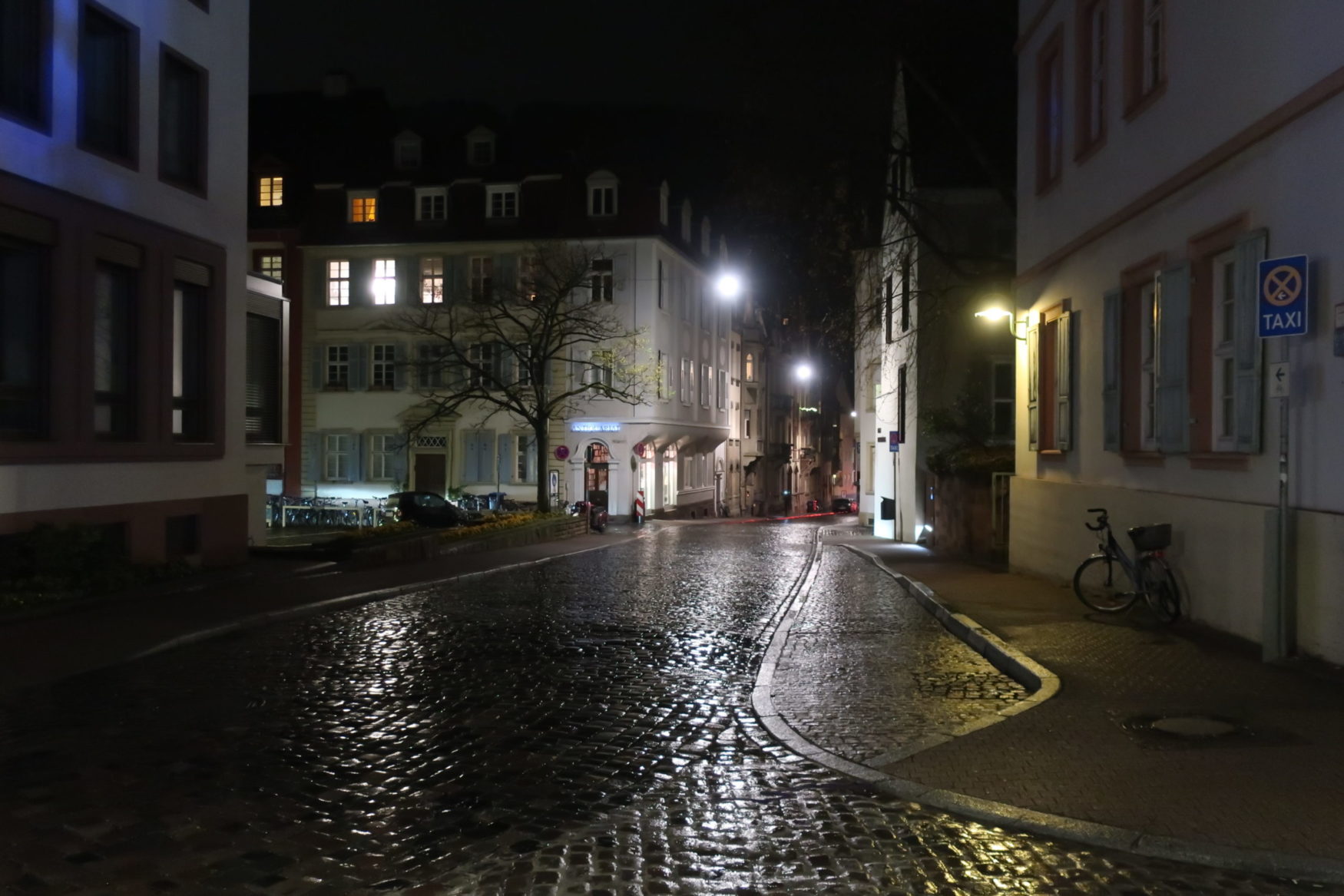 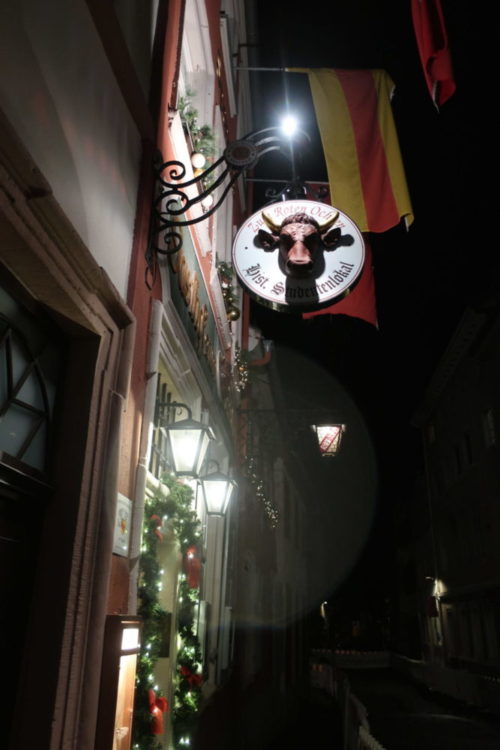 It was dark by the time I climbed the main street and soon softly-lit panes of coloured glass, under the hanging sign of a Red Ox, were beckoning me indoors. 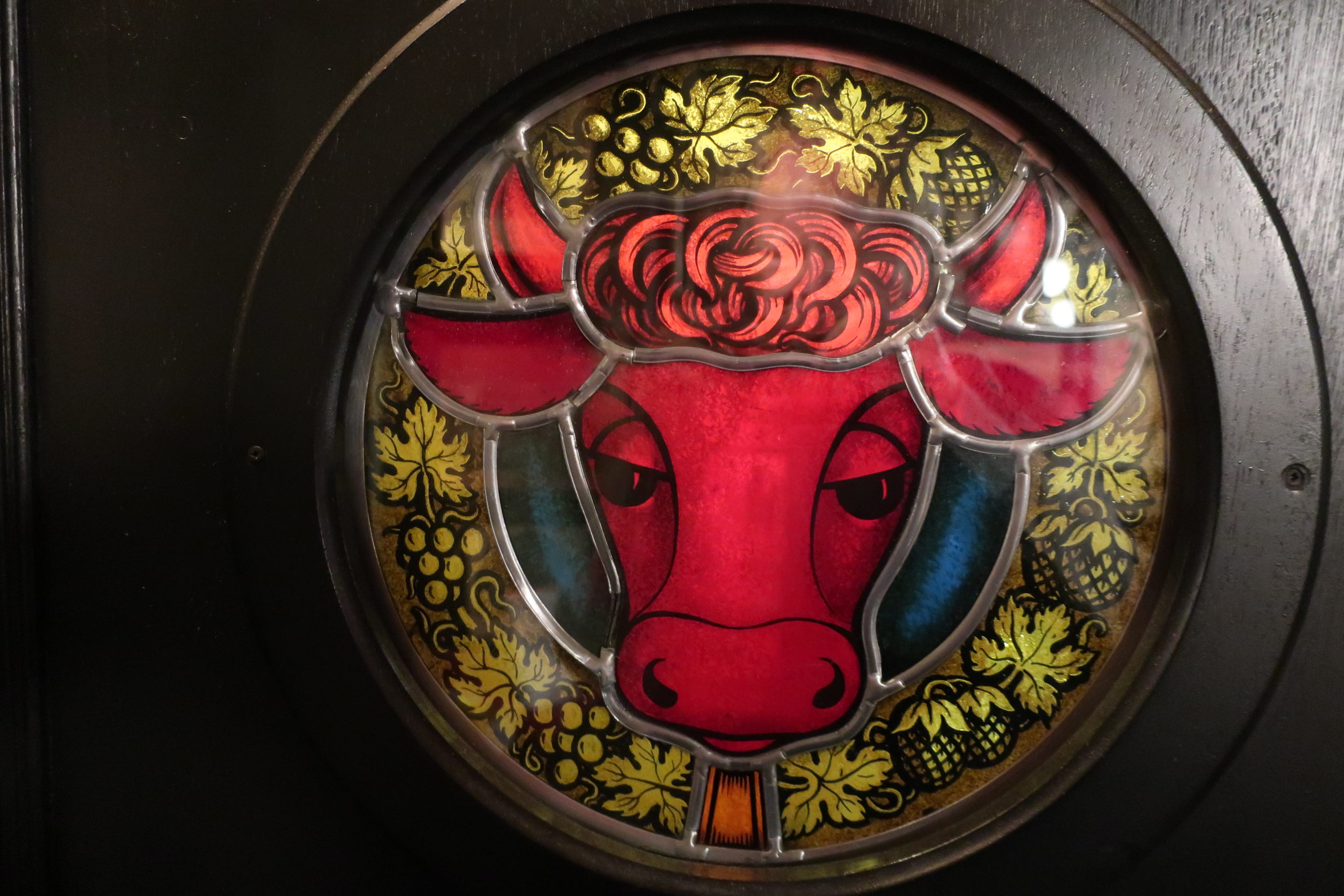 With freezing cheeks and hair caked with snow, I clumped into an entrancing haven of oak beams and carving and alcoves and changing floor levels. A jungle of impedimenta encrusted the interior – mugs and bottles and glasses and antlers- the innocent accumulation of years , not stage props of forced conviviality – and the whole place glowed with a universal patina. It was more like a room in a castle and, except for a cat asleep in front of the stove, quite empty. 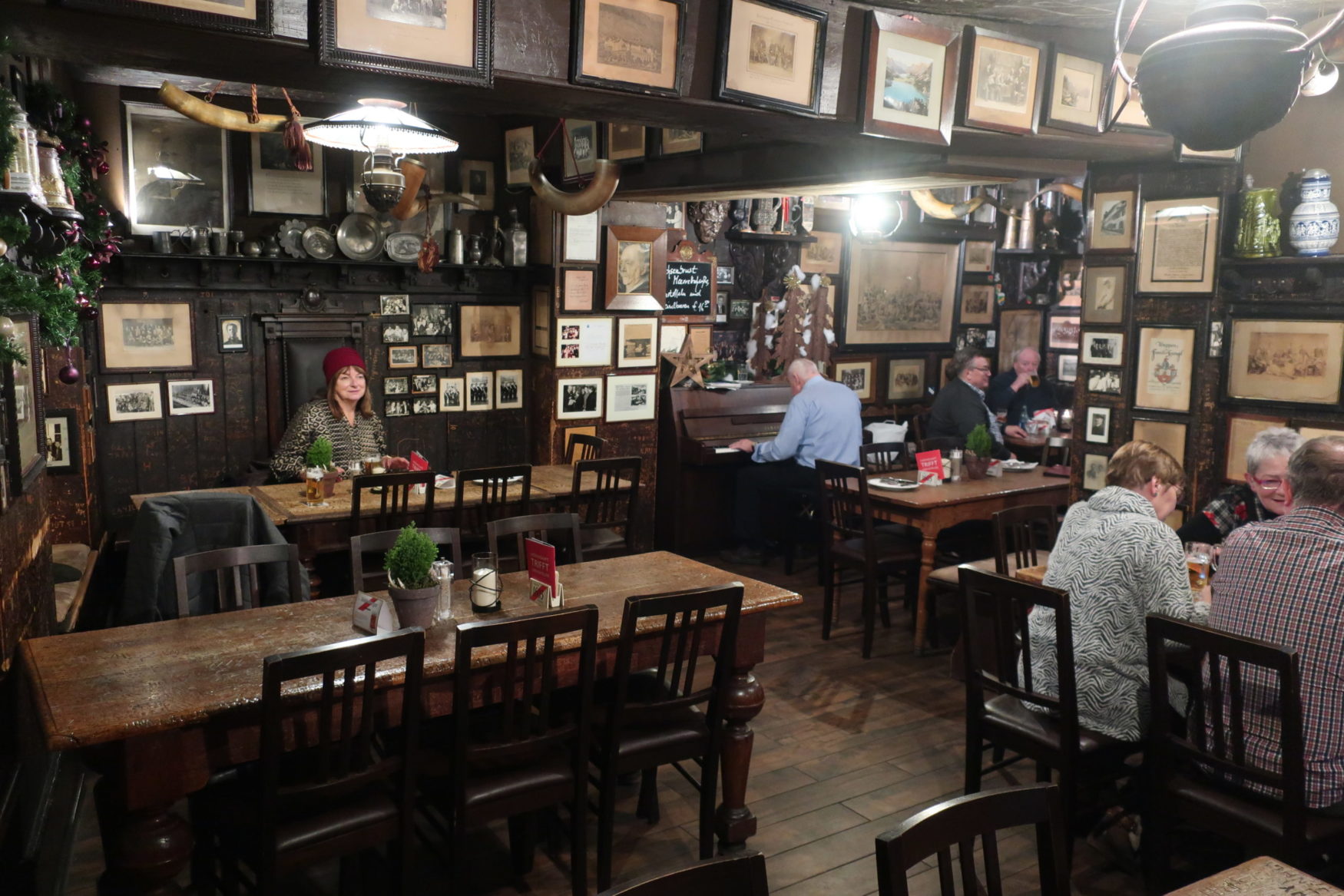 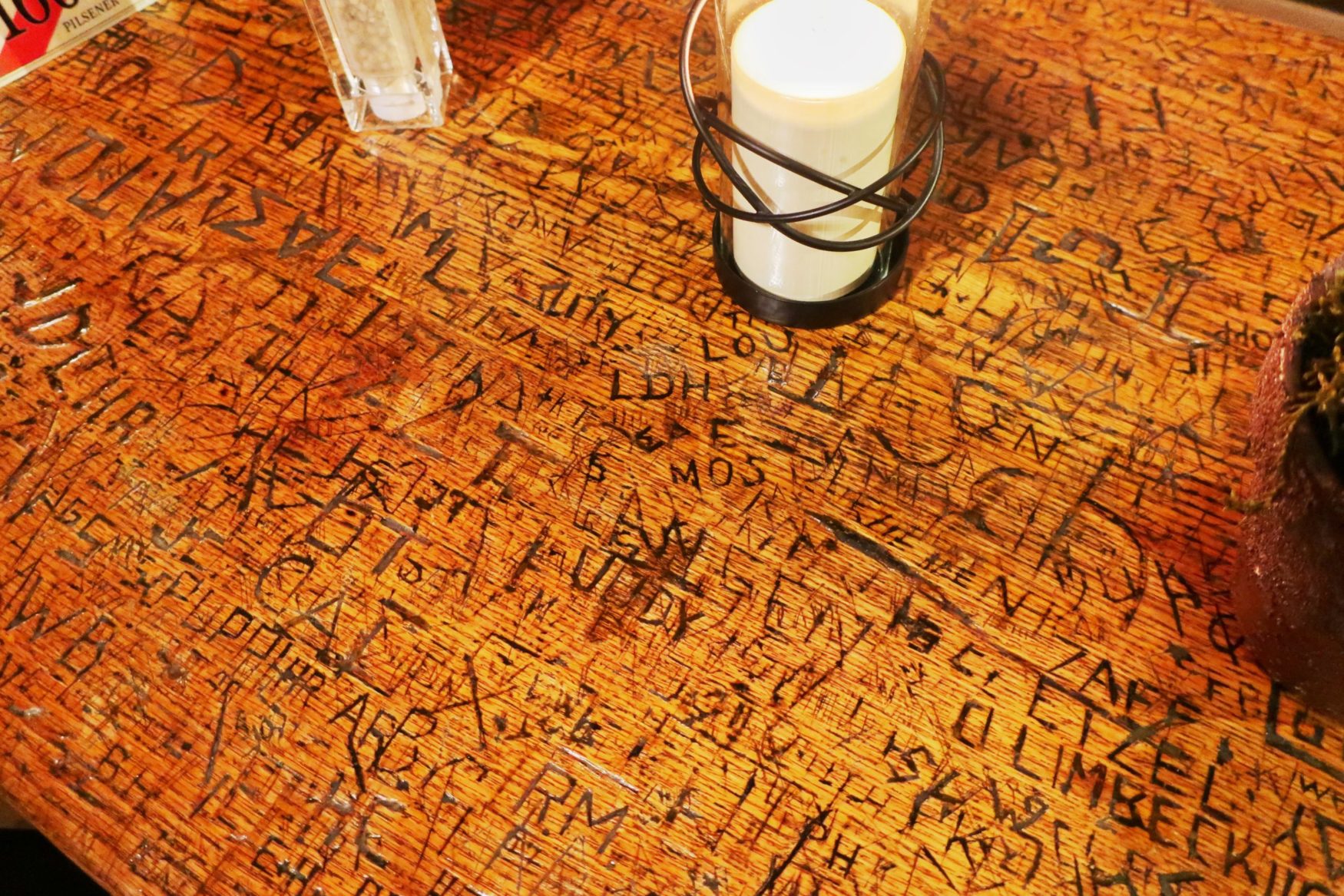 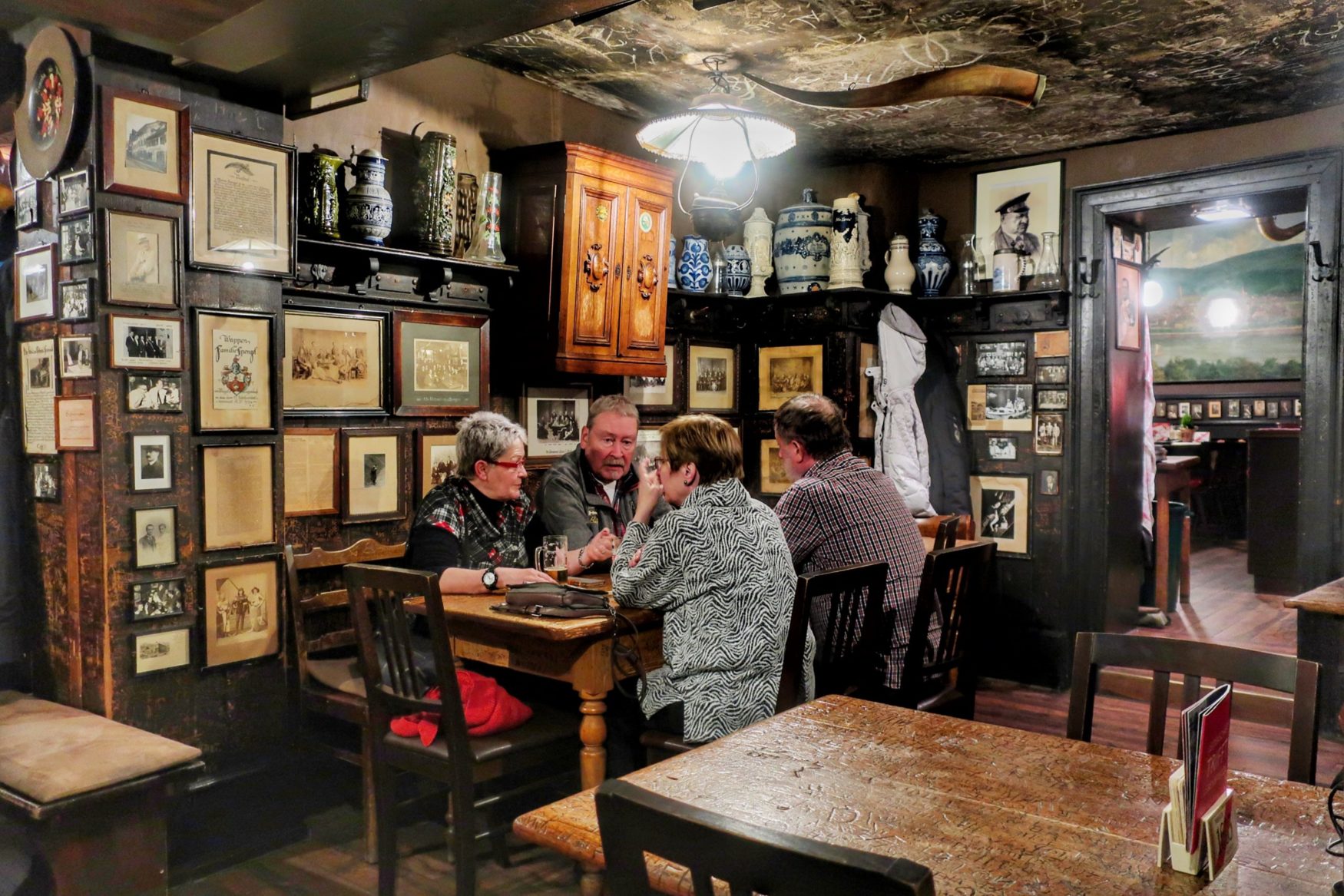 This was the moment I longed for every day. Settling at a heavy inn-table, thawing and tingling, with wine, bread, and cheese handy and my papers, books and diary all laid out; writing up the day’s doings, hunting for words in the dictionary, drawing, struggling with verses, or merely subsiding in a vacuous and contented trance while the snow thawed off my boots. 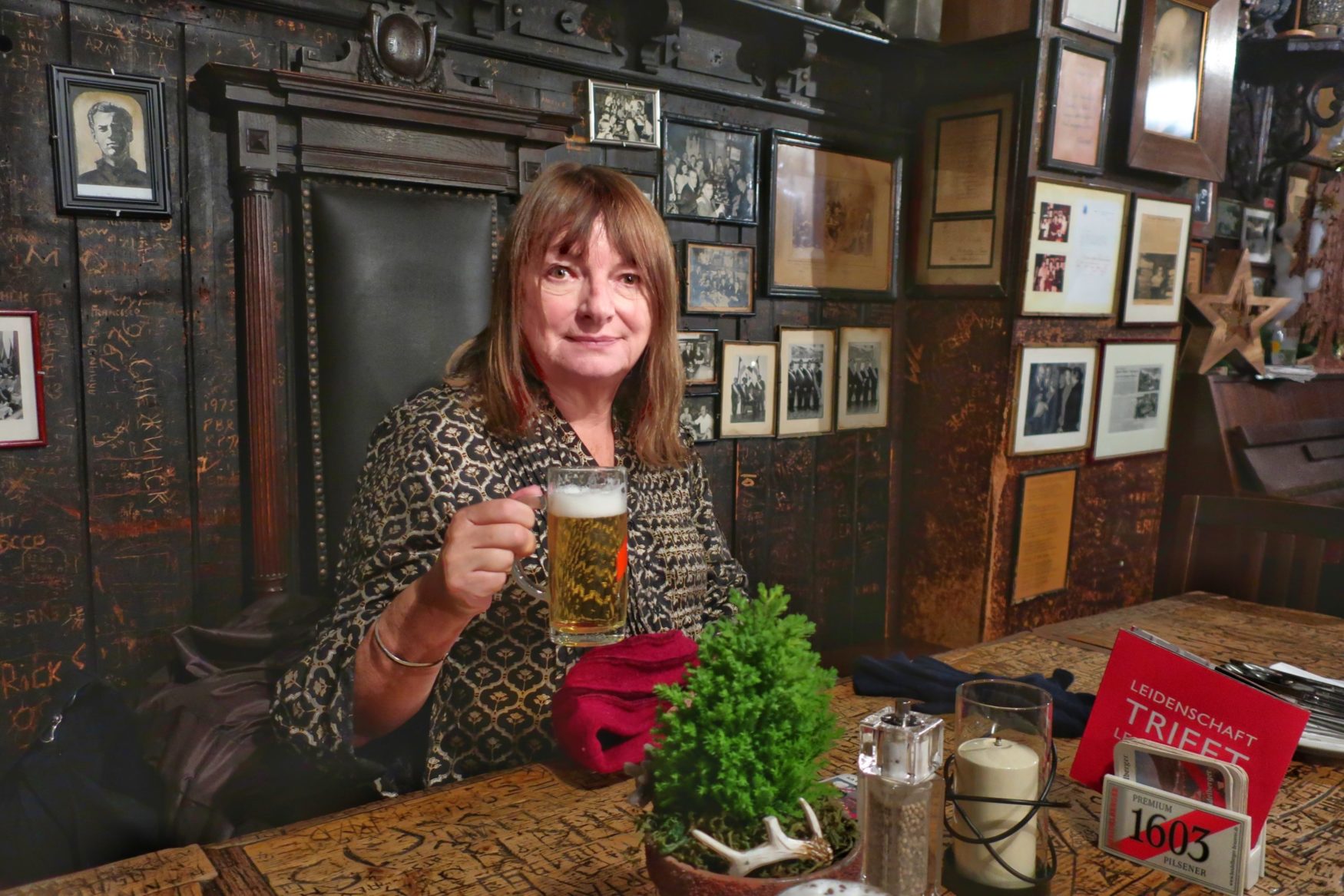 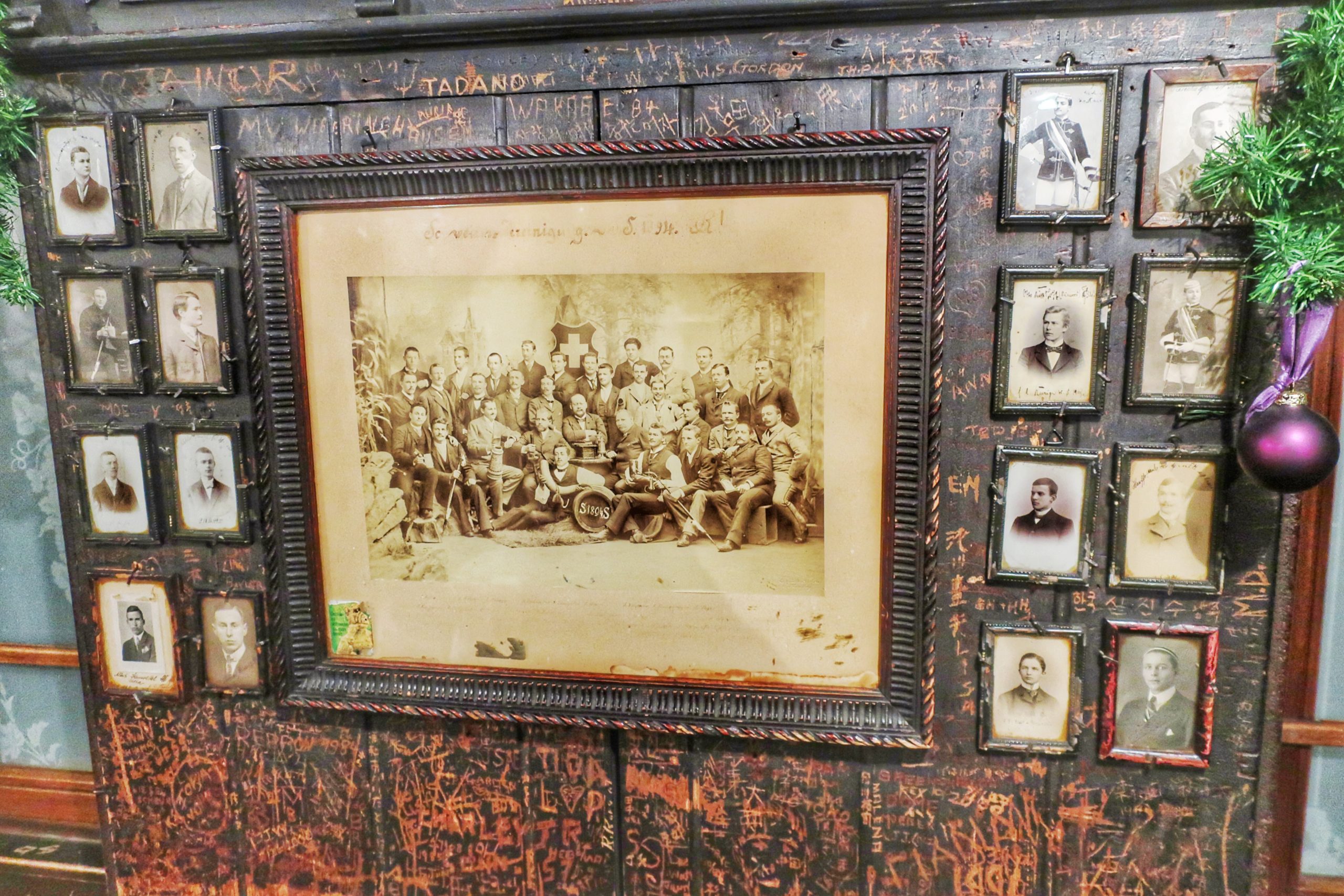 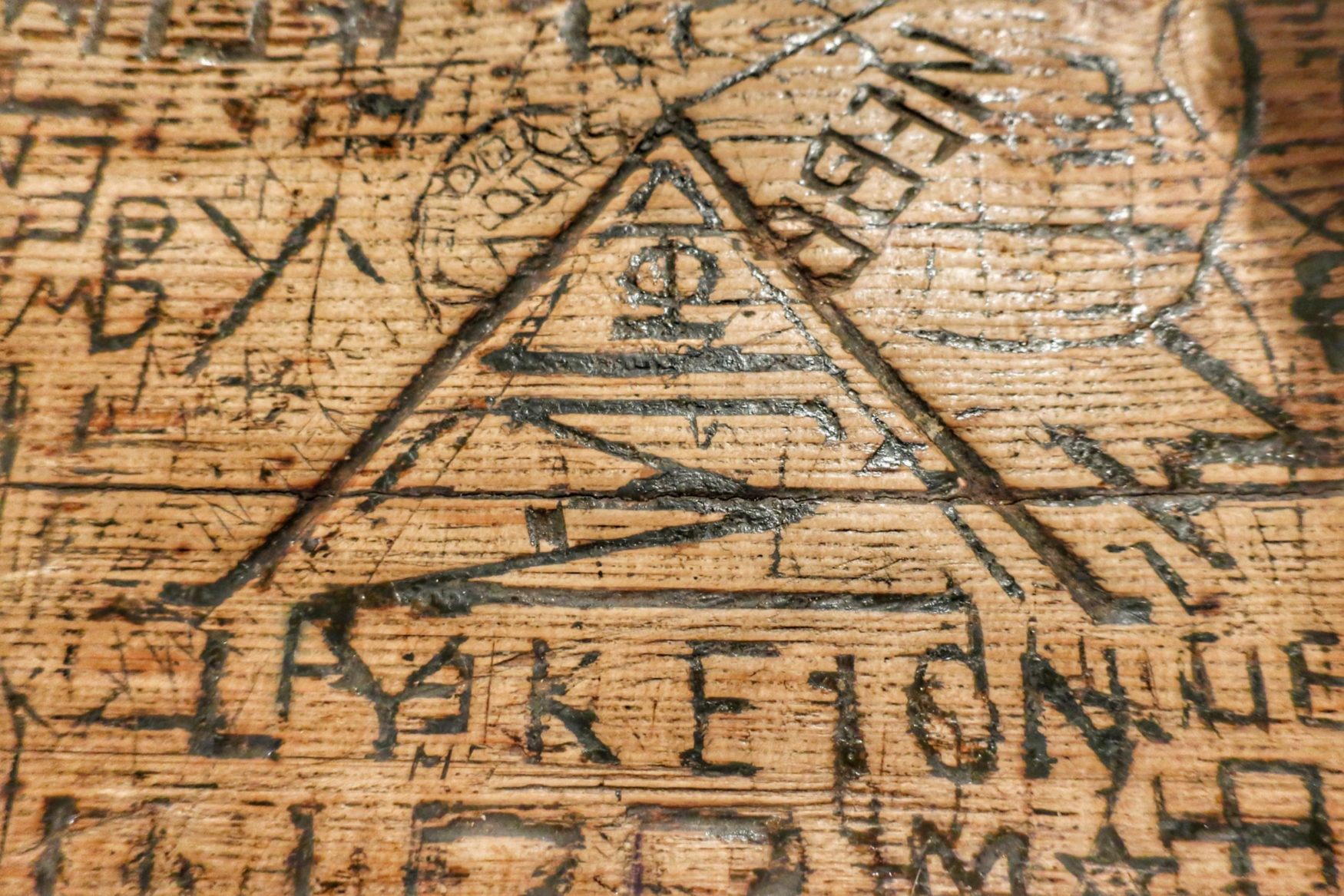 An elderly woman came downstairs and settled by the stove with her sewing. Spotting my stick and rucksack and the puddle of melting snow, she said, with a smile,’Who rides so late through night and wind? What, a foreigner?’ I knew what to say at this point, and came in on cue:….Englischer Student..zu Fuss nach Konstantinopel… I’d got it pat by now. ‘Konstantinopel?’ she said. ‘Oh Woe! So far! And in midwinter too. She asked where I would be the day after, on New Year’s Eve. Somewhere on the road, I said. ‘You can’t go wandering about in the snow on Sylvesterabend!’ she answered.’And where are you staying tonight, pray?’ I hadn’t thought yet. Her husband had come in a little while before and overheard our exchange. ‘Stay with us,’ he said.’You must be our guest’. 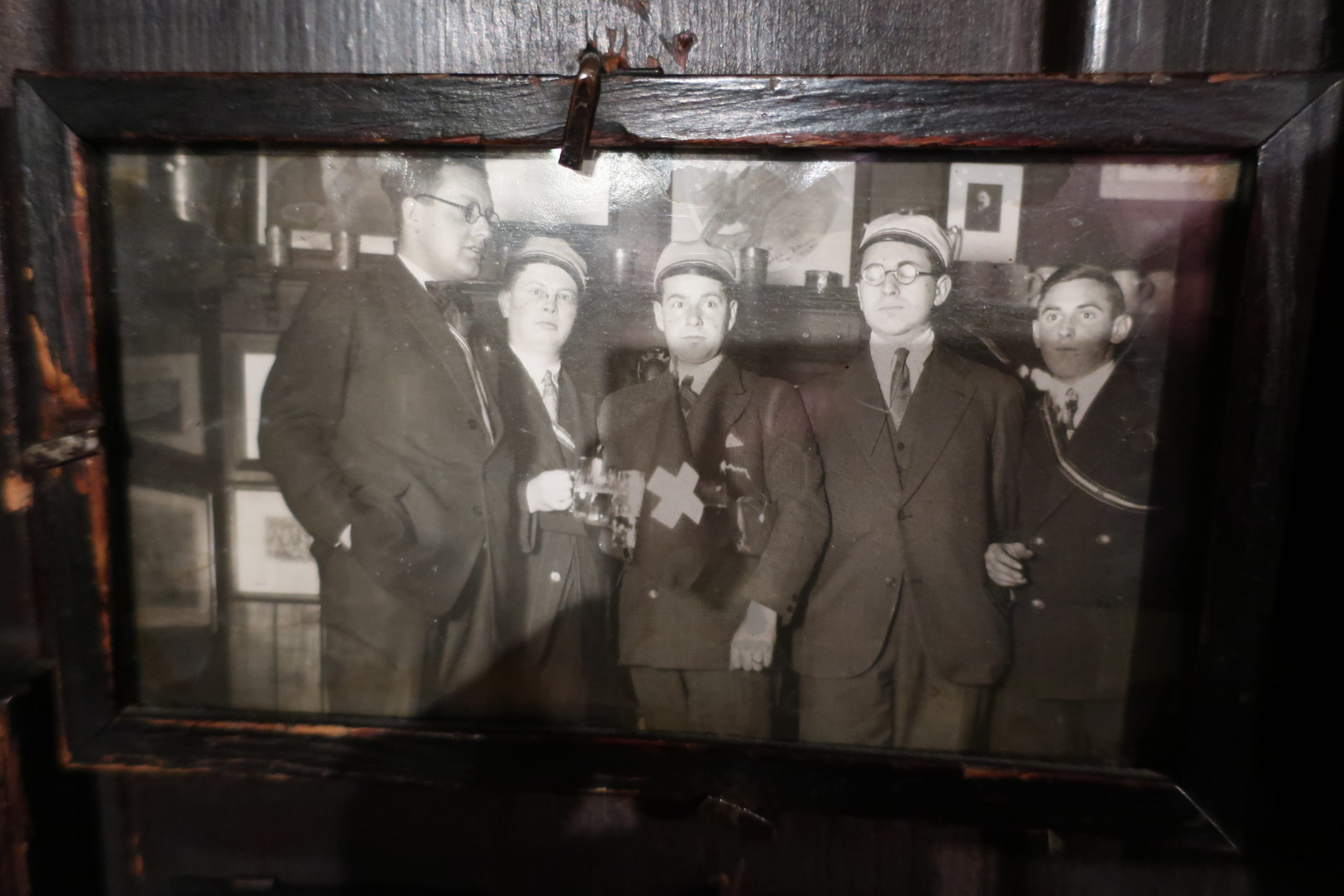 They were the owner and his wife and their names were Herr and Frau Spengel. Upstairs, on my hostess’s orders, I fished out things to be washed – it was my first laundry since London- and handed them over to the maid: wondering, as I did so, how a German would get on in Oxford if he turned up at The Mitre on a snowy December night. 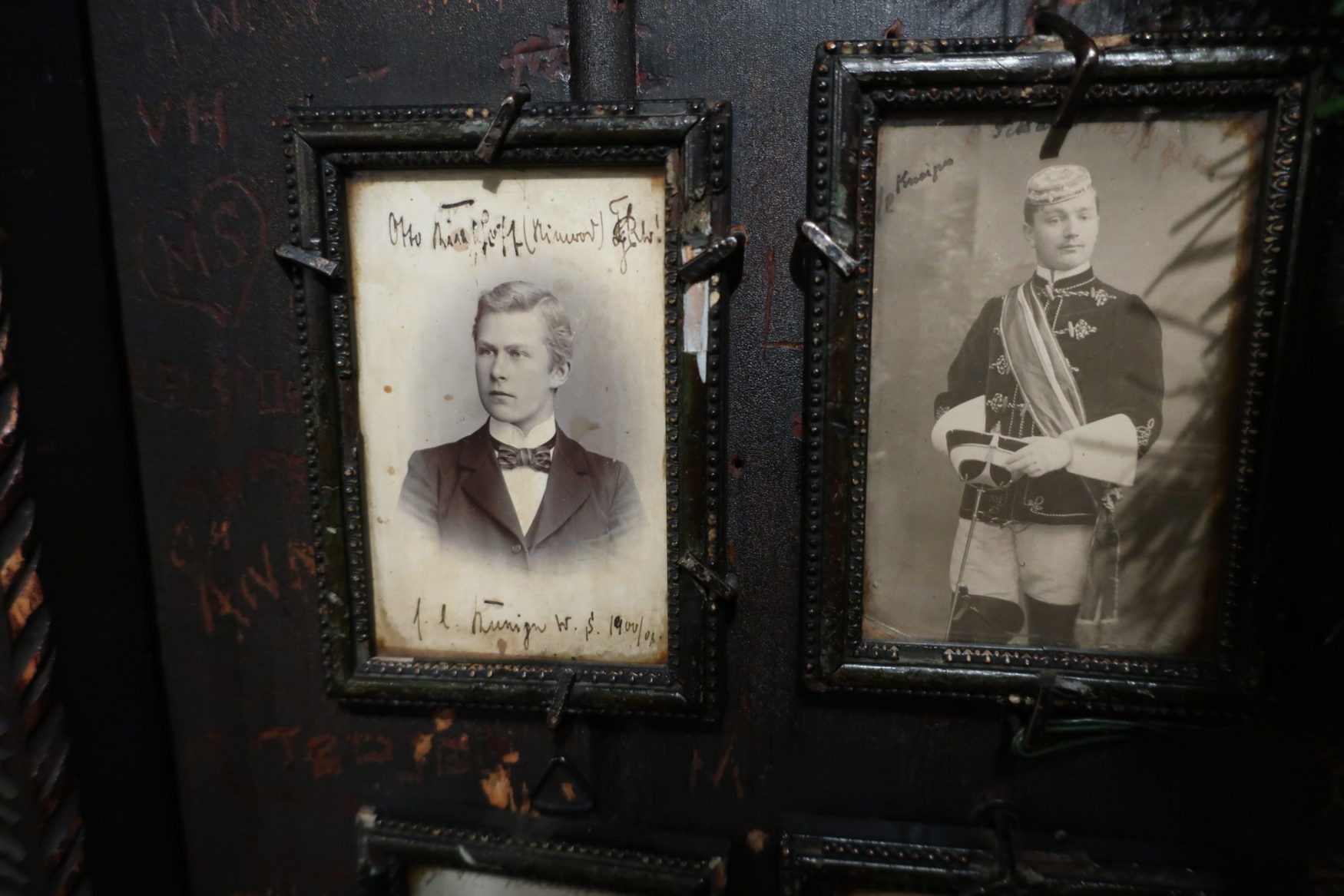 …….the walls were crowded with faded daguerrotypes of slashed and incipiently side-whiskered scions of the Hochjunkertum defiant in high boots and tricoloured sashes. Their gauntlets grasped basket-hilted sabres . Askew on those faded pates little caps like collapsed képis were tilted to display the initial of the Corps embroidered on the crown – a contorted Gothic cypher and an exclamation mark, all picked out in gold wire.

I pestered Fritz Spengel, the son of my hosts, with questions about student life: songs, drinking ritual, and above all duelling, which wasn’t duelling at all of course, but tribal scarification.Those dashing scars were school ties that could never be taken off, the emblem and seal of a ten-year’s cult of the humanities. 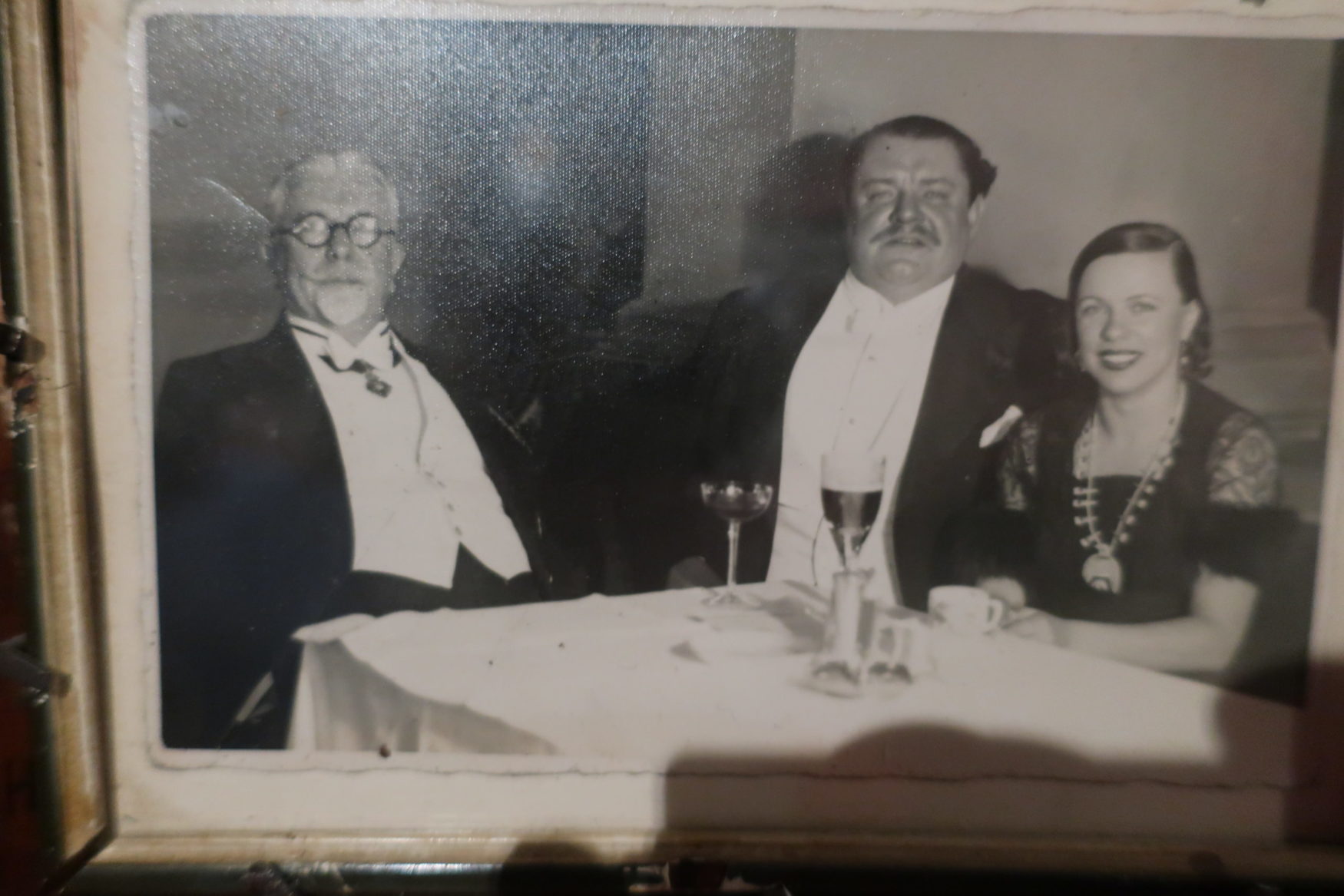 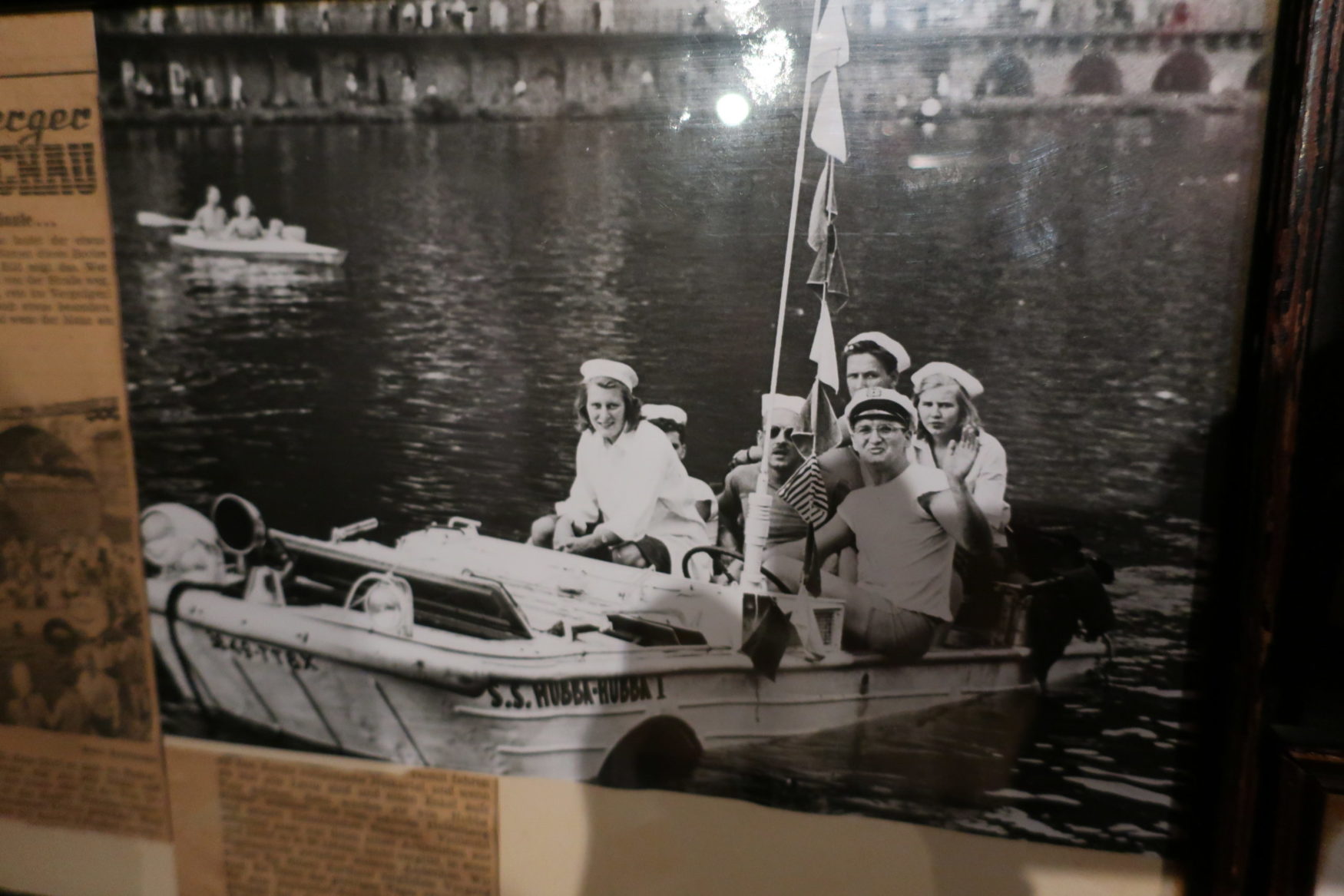 I had noticed these academic stigmata on the spectacled faces of doctors and lawyers; brow, cheek or chin, and sometimes all three, were ripped up by this haphazard surgery in puckered or gleaming lines strangely at odds with the wrinkles that middle age had inscribed there. I think Fritz, who was humane, thoughtful and civilised and a few years older than me, looked down on this antique custom, and he answered my questions with friendly pity. He knew all too well the dark glamour of the Mensur (a fencing bout) among foreigners. 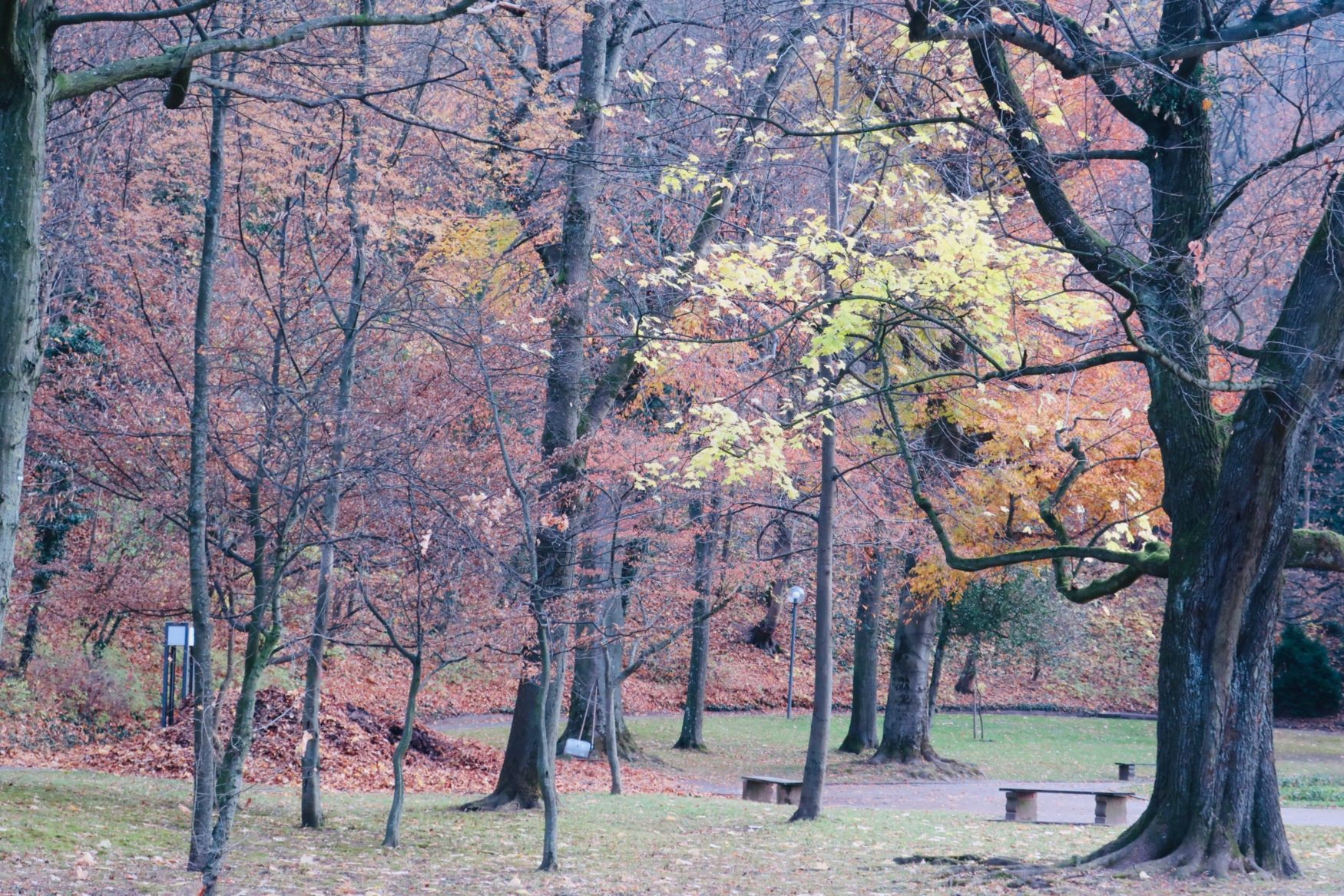 That afternoon, with Fritz and a friend, I climbed through the woods to look at the ruins of the palace that overhangs the town:an enormous complex of dark red stone which turns pink, russet or purple with the vagaries of the light and the hour. The basic mass is medieval, but the Renaissance bursts out again and again in gateways and courtyards and galleries and expands in the delicate sixteenth-century carving. 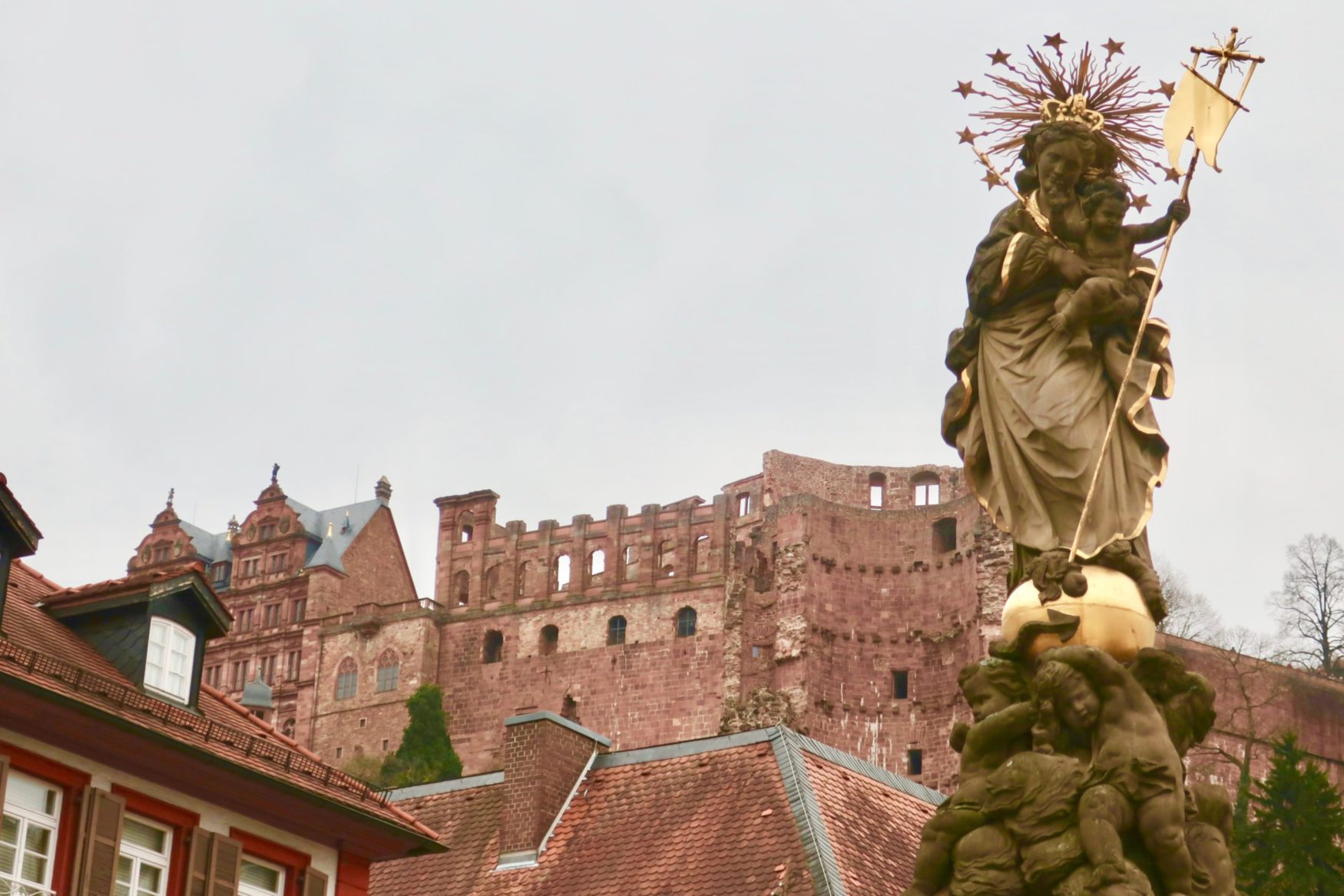 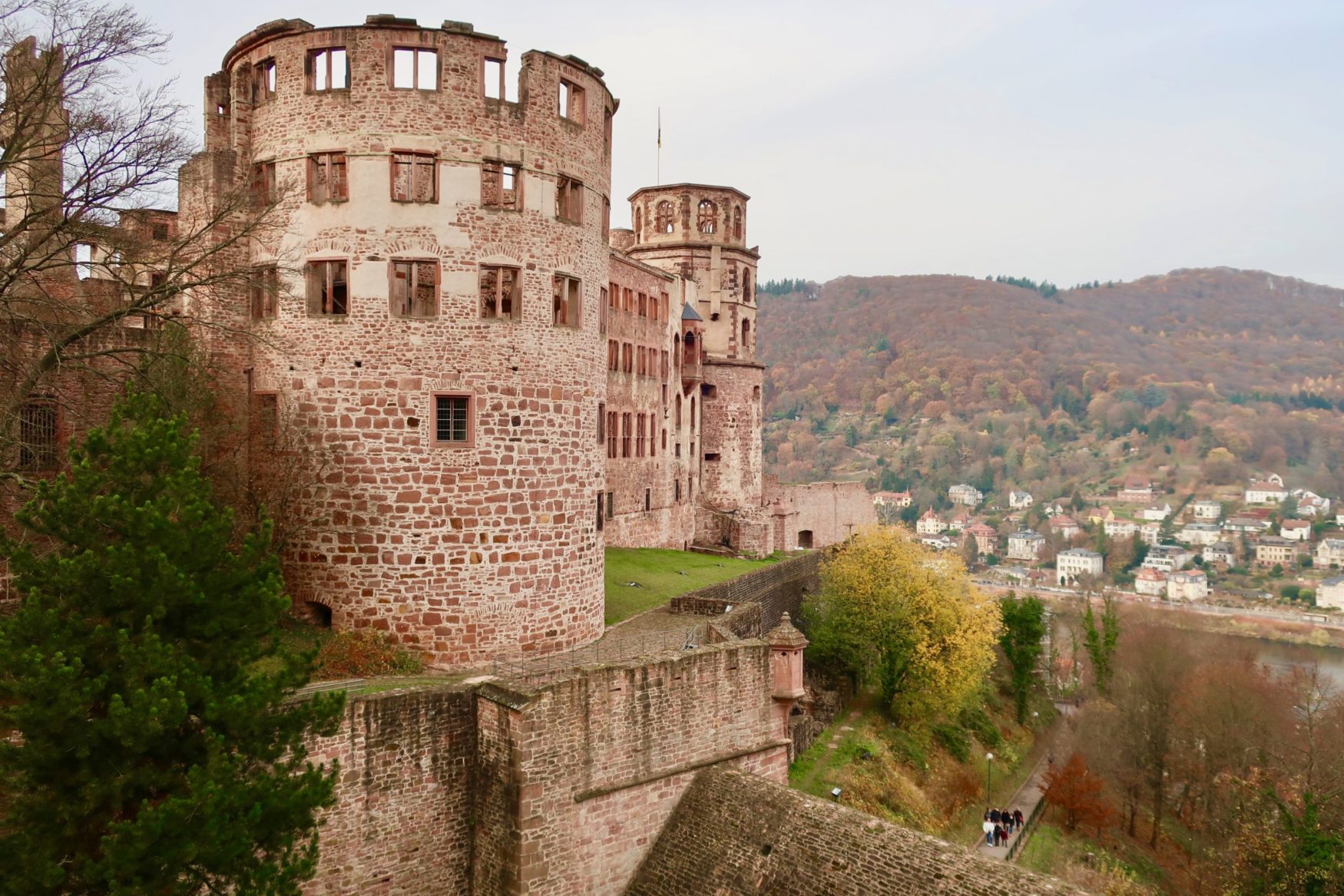 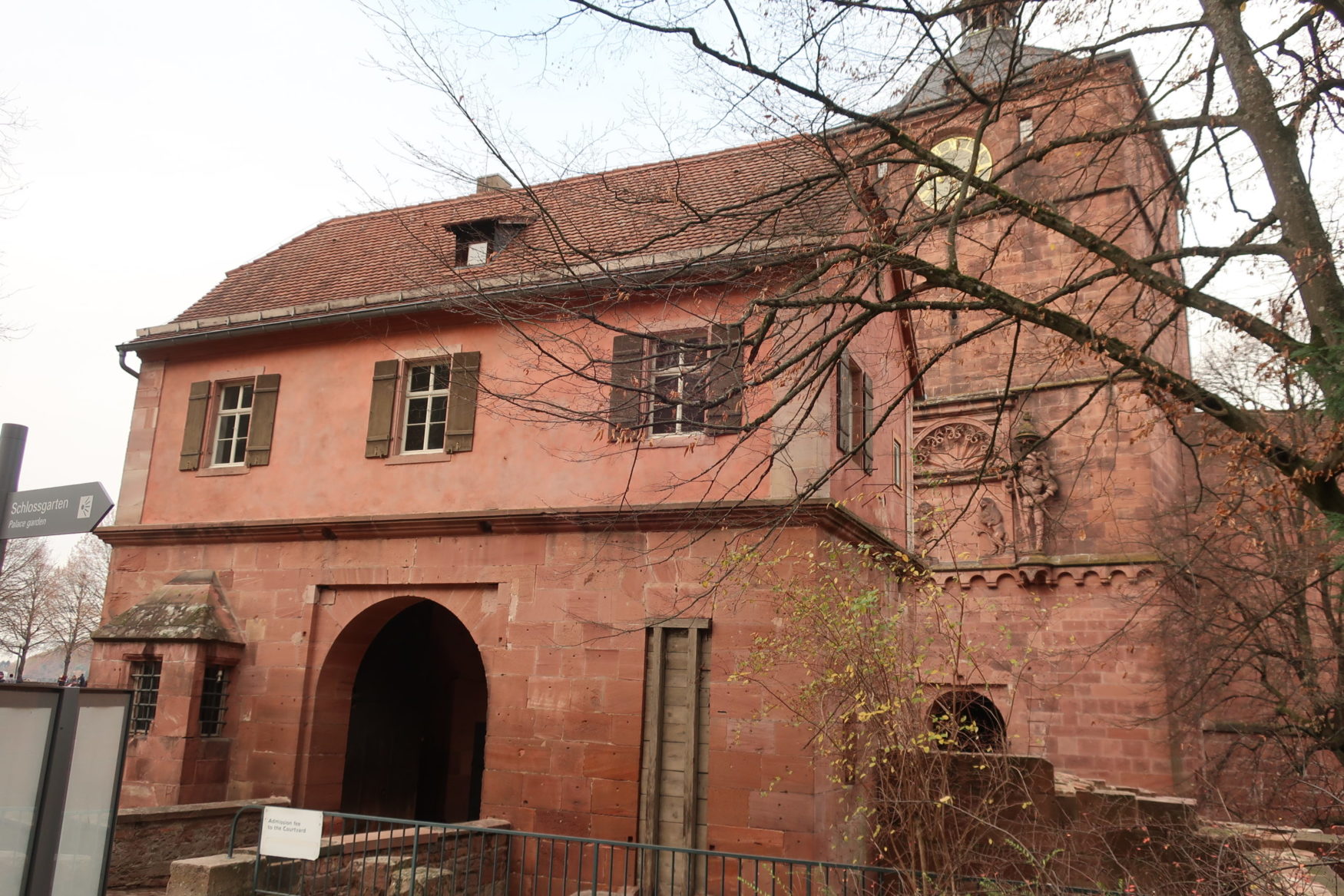 ‘Guess what this gate is called!’ Fritz said, slapping a red column. ‘The Elizabeth or English Gate! Named after the English Princess’ The Winter Queen! Elizabeth, the high-spirited daughter of James I, Electress of Palatine and, for a year, Queen of Bohemia! She arrived here as a bride of seventeen and for the five years of her reign, Heidelberg, my companions said, had never seen anything like the masques and the revels and the balls.

But soon, when the Palatinate and Bohemia were both lost and her brother’s head had been cut off and the Commonwealth had reduced her to exile and poverty, she was celebrated as the Queen of Hearts by a galaxy of champions. Her great-niece, Queen Anne, ended the reigning line of the Stuarts Elizabeth’s grandson, George I, ascended the throne where her descendant still sits. 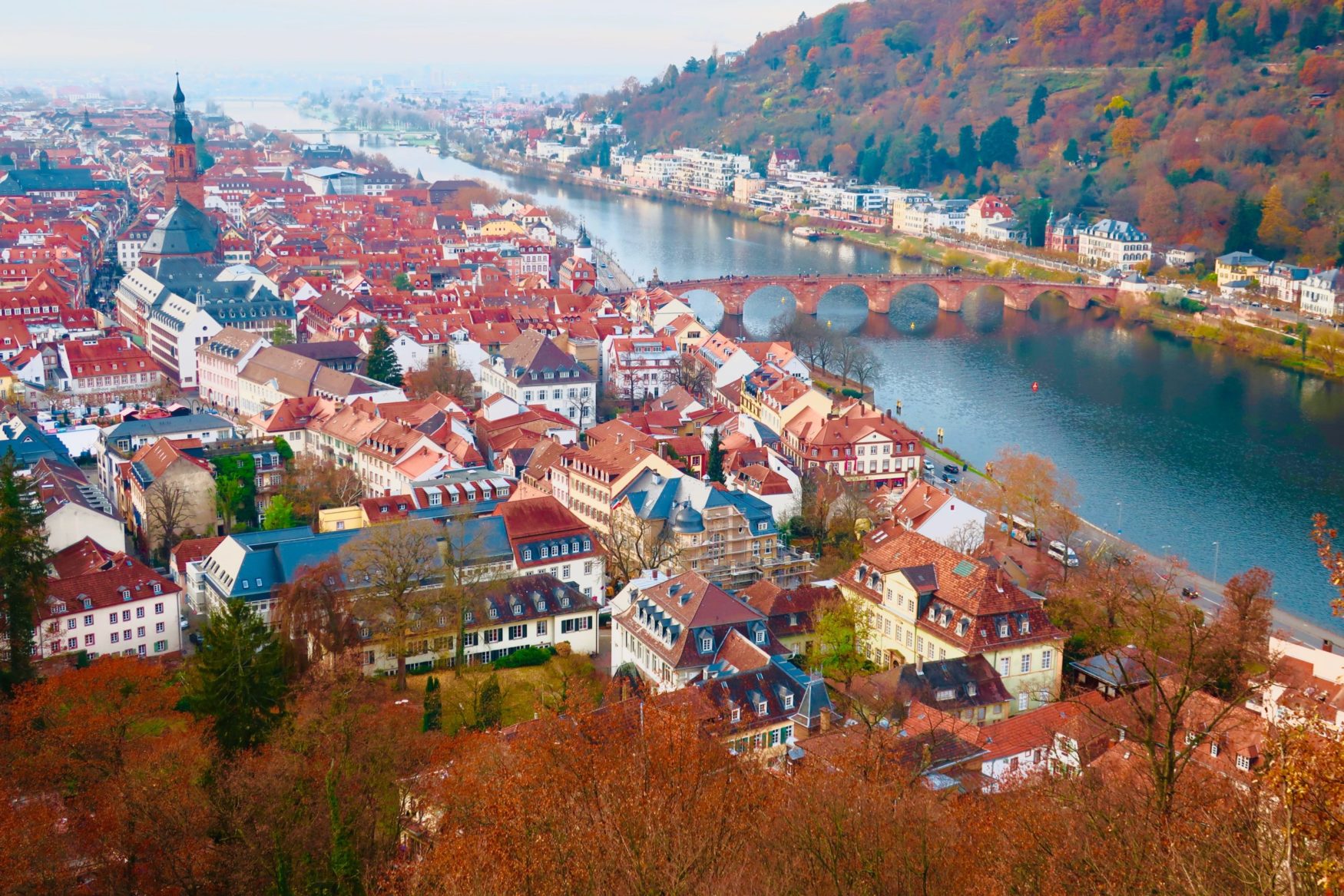 In spite of its beauty, it was a chill, grey prospect at this moment. Below the last balustrade, the roofs of the town clustered and beyond it flowed the Neckar and then the Rhine, and the Haardt Mountains, and the Palatine forest rippled away beyond.

A sun like an enormous crimson balloon was about to sink into the pallid landscape. 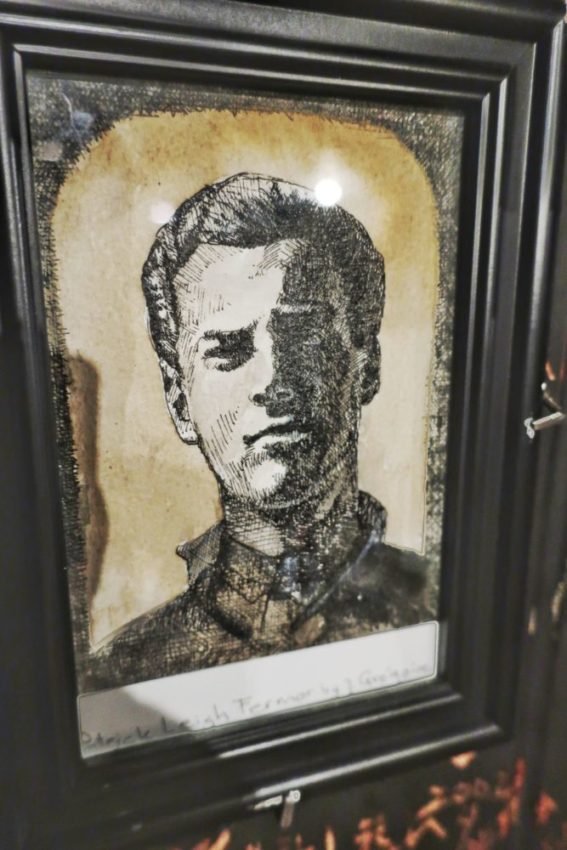 After the war in which Paddy’s most famous exploit, the kidnapping of the German General Kreipe was celebrated in a book and in the Powell and Pressburger film, Ill Met by Moonlight, Paddy sought to discover what had happened to his hosts in Heidelberg. A letter from Fritz’s son, born in 1939, told him that the parents were dead and that Fritz had been killed while serving in Norway and had been buried in Trondheim in 1940 six years after they had met. The present Herr Spengel (in 1977) was the sixth generation of the same family to own and run the same inn. I wonder today whether it is still in the Spengel family, perhaps I will enquire at Zum Roten Ochsen the next time I am back in the beautiful city of Heidelberg.

Should you be inspired to visit yourself, late November and all of December coincides with their Winter Market. I can highly recommend the Weisser Bock a hotel run by the Family Merz which is a very welcoming space with comfortable rooms and an excellent restaurant.