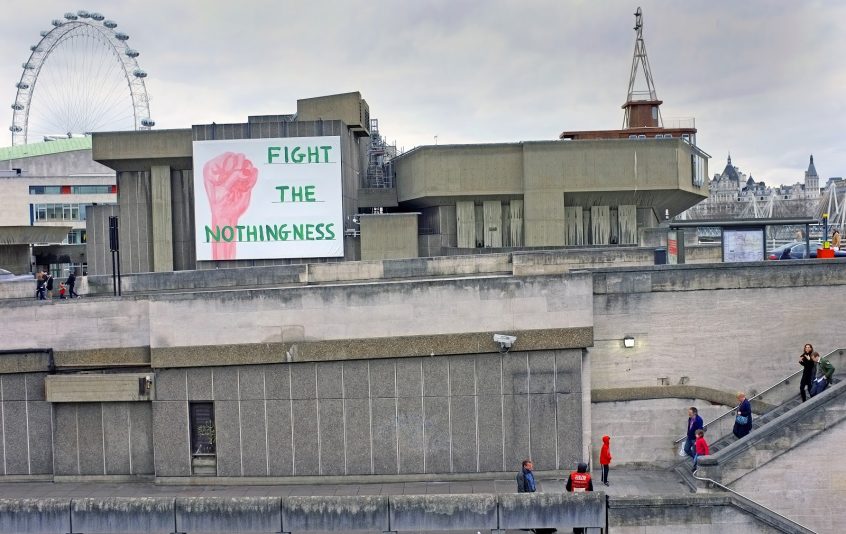 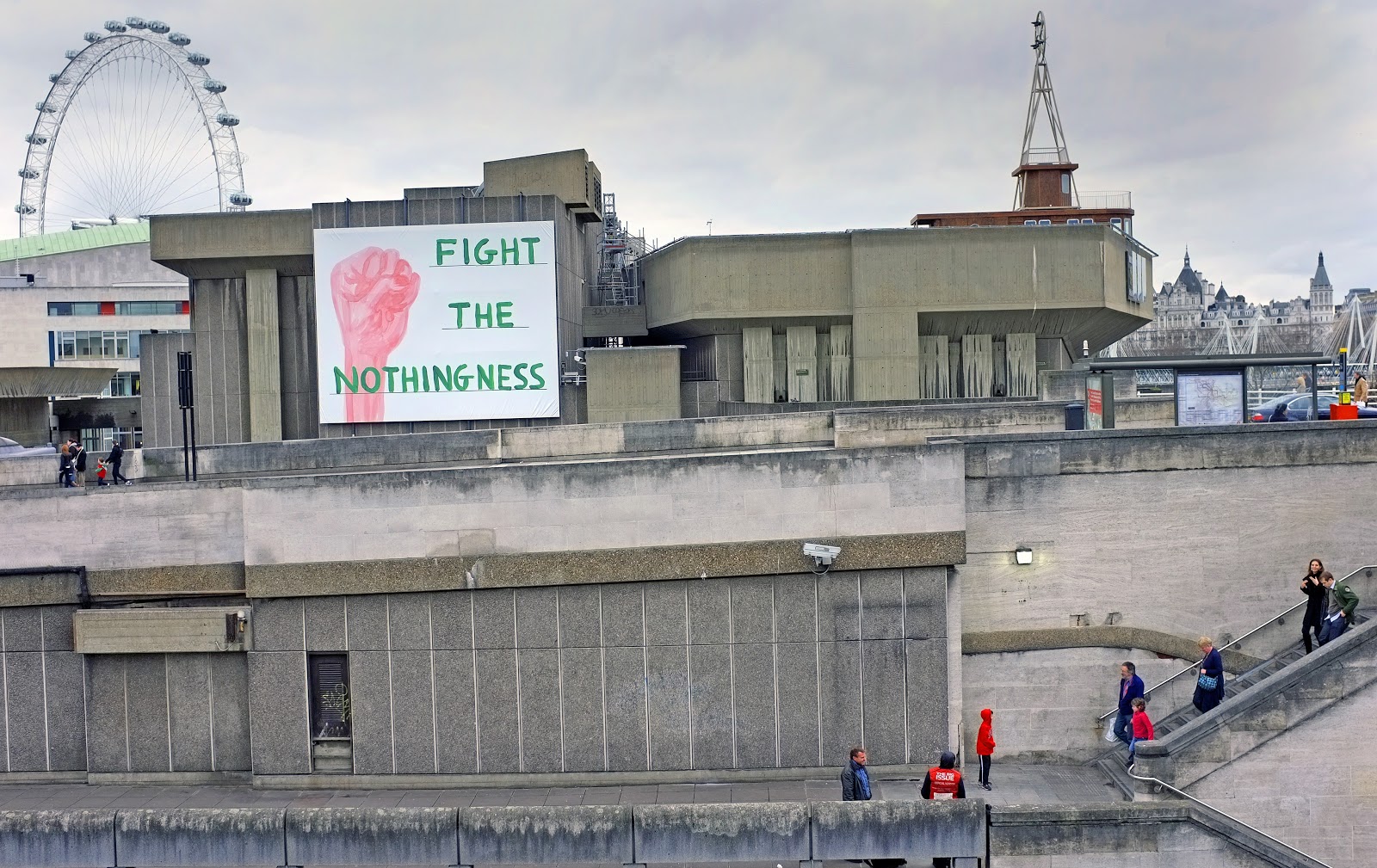 She Stoops to Conquer by Oliver Goldsmith is one of those plays I always thought I had seen but actually never had, not unless I saw it as a school production way back when. Written and set in the eighteenth century, it is currently showing at London’s National Theatre. It is the best play I have seen so far this season. Oliver Goldsmith is an inspiring writer for any aspiring writer. His secret is apparent in an essay on National Prejudices where he once wrote the following:

As I am one of that sauntering tribe of mortals who spend the greater part of their time in taverns, coffee houses, and other places of public resort, I have thereby an opportunity of observing an infinite variety of characters, which to a person of a contemplative turn, is a much higher entertainment than a view of all the curiosities of art or nature…

Most authors, poets and playwrights would agree that skilled observation is an essential tool for writers. Goldsmith believed that real comedy was an art form that would make people laugh. During the eighteenth century there was a fashion for sentimental comedy which did not interest Goldsmith. For example, many theatre goers regarded puns as low humour and snobs considered the comic dialogue in Goldsmith’s plays gross. None the less, at the time, She Stoops to Conquer was, to Goldsmith’s great relief, well received. This may have been thanks to support from his friends Samuel Johnson and Sir Joshua Reynolds. It was a play that succeeded in making people laugh. 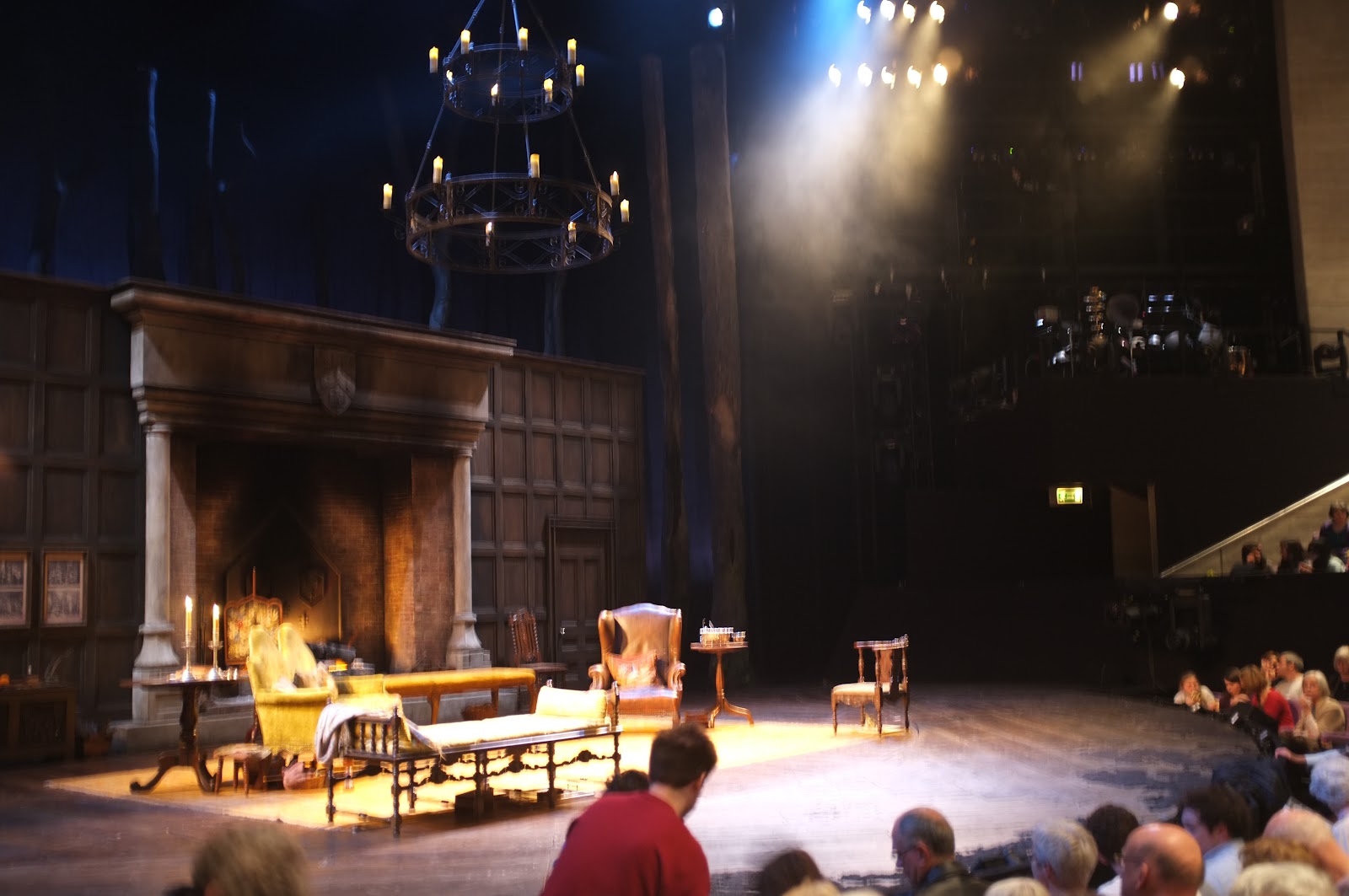 There is much more to the National Theatre than ‘the play’. Our recent visit to the National began with a delicious lunch in the Mezzanine restaurant which is just a convenient step or two away from the three perfoming spaces at the National. We regularly visit the RSC at Stratford where, although the restaurant occupies a delightful space at the top of the new RSC building with enchanting views over the river, the menu and cooking simply do not compare with that at the Mezzanine. The Mezzanine overlooks the River Thames and the best tables are, without doubt, by the window with an opportunity to watch the constant traffic on the river and the continual passeggiata along the embankment. 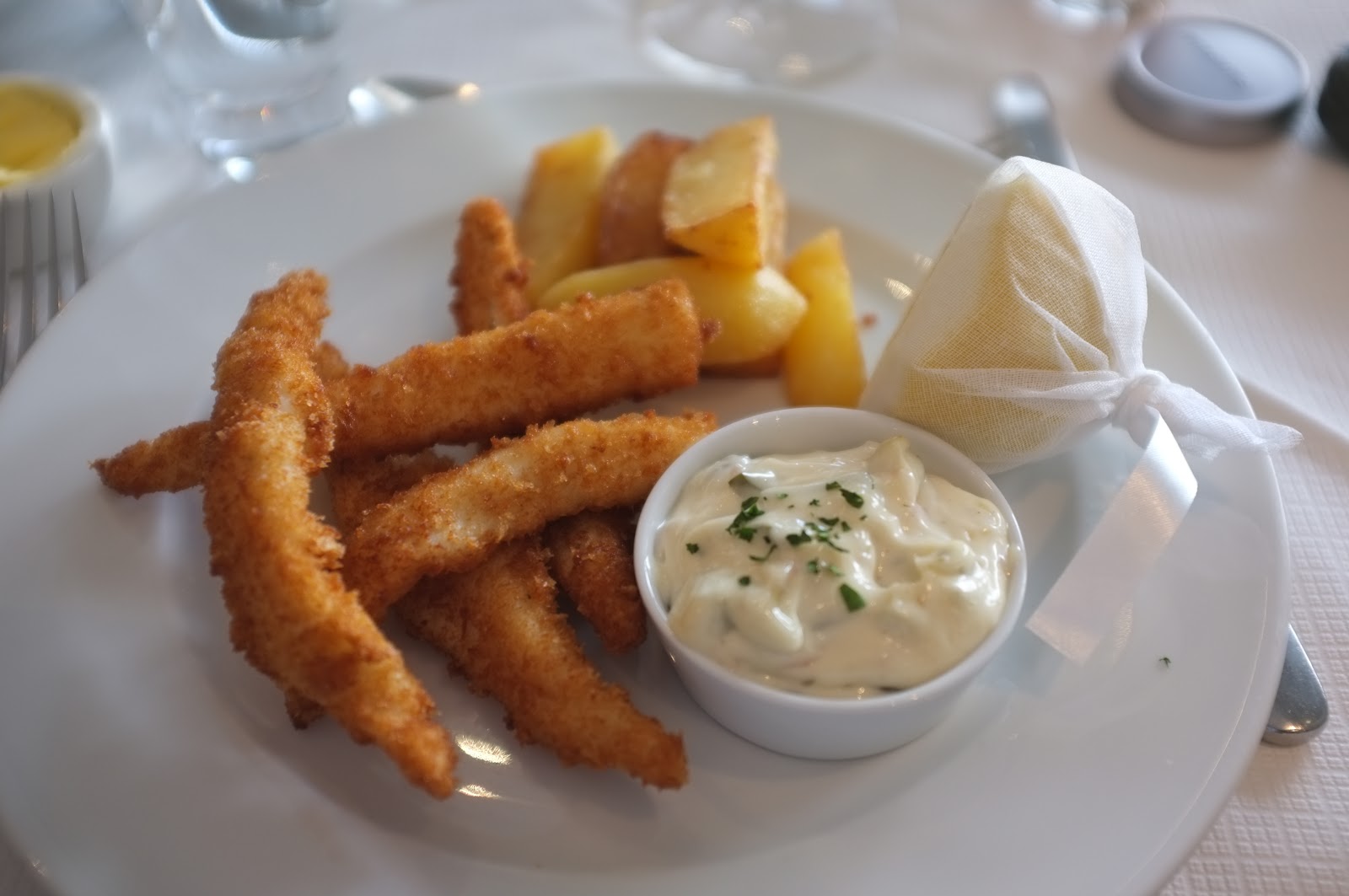 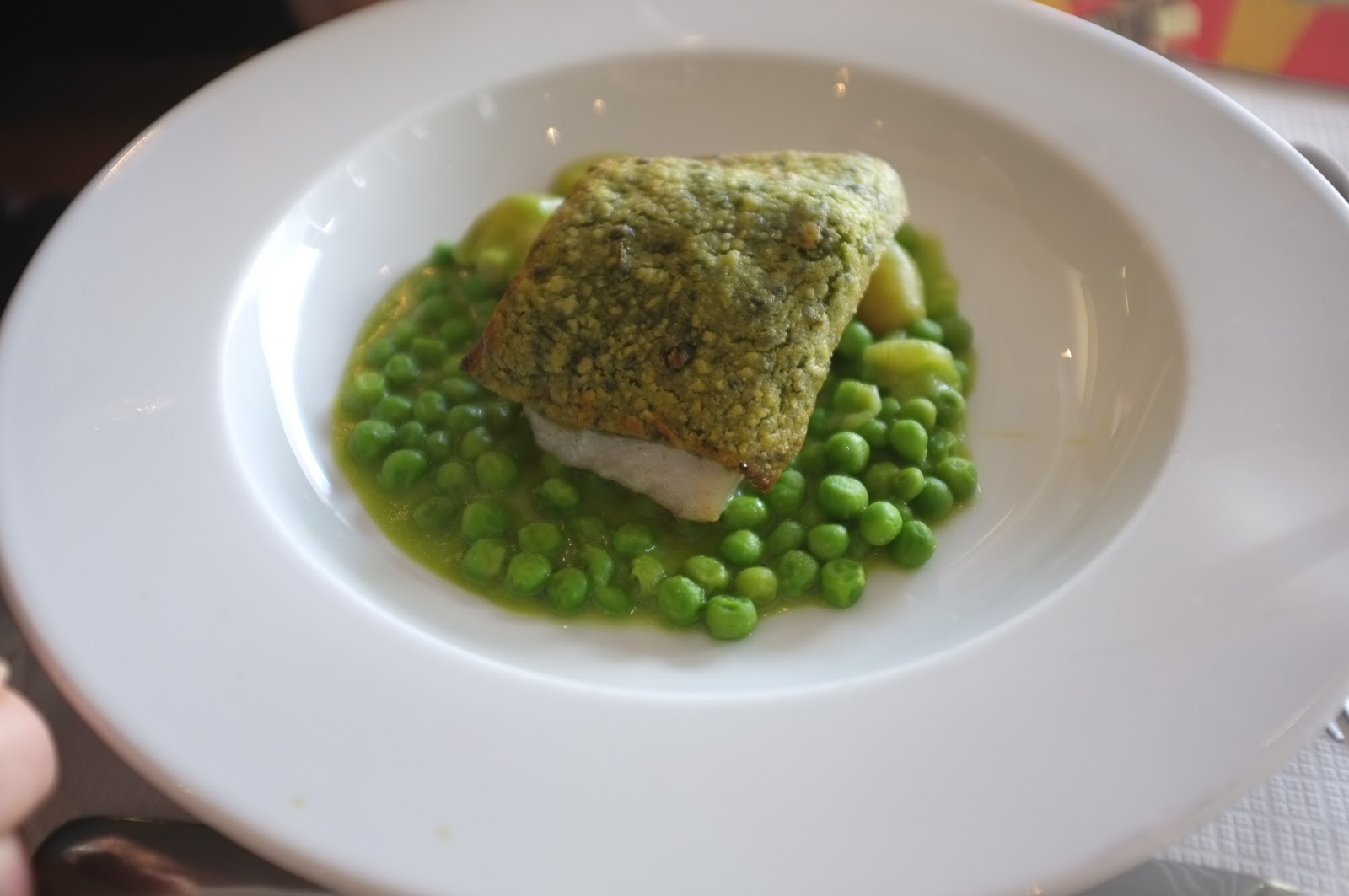 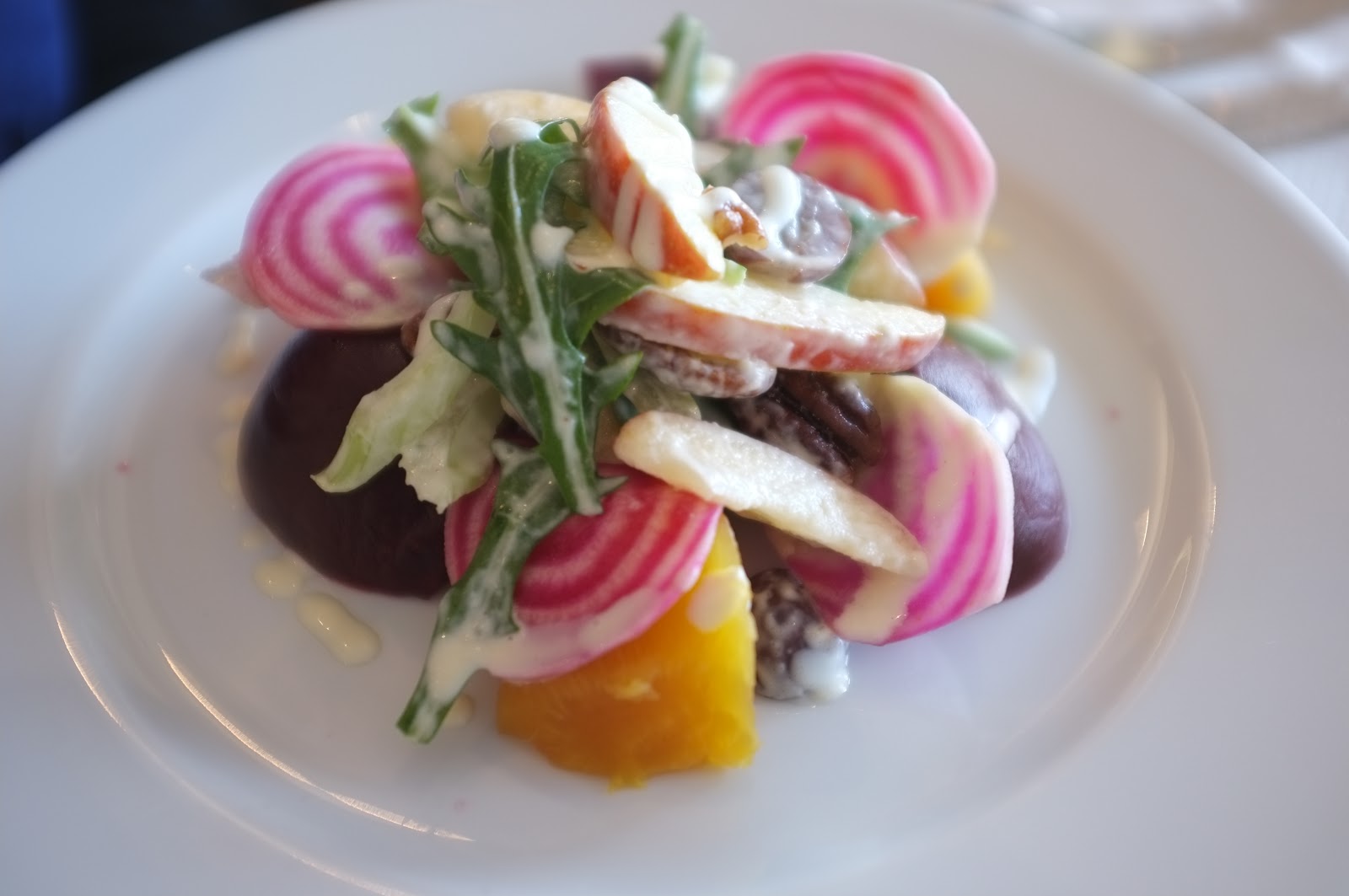 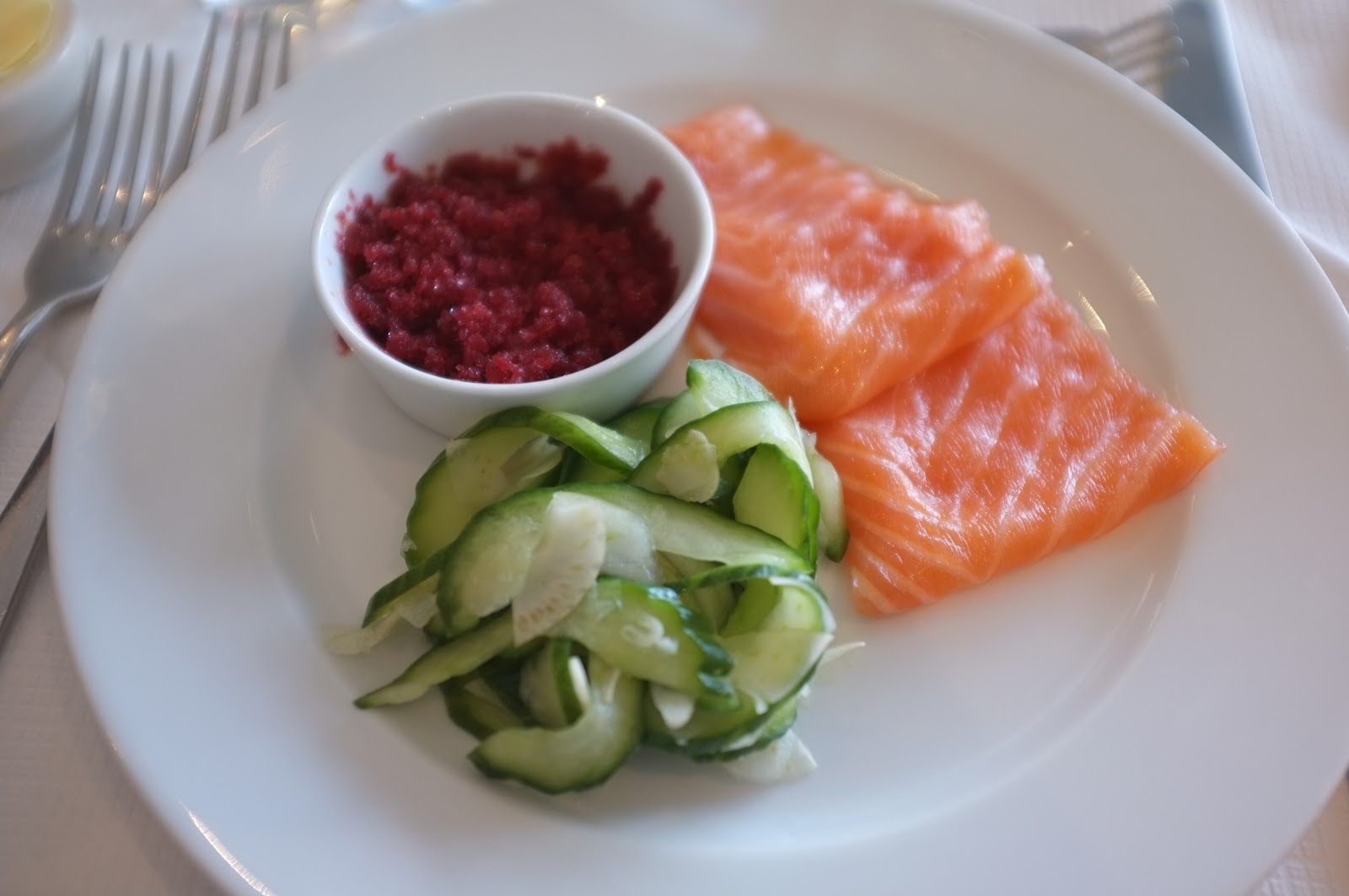 An added attraction of eating in the Mezzanine is that one can eat dessert during the play’s interval, a pleasant experience especially when accompanied by an appropriate tipple. 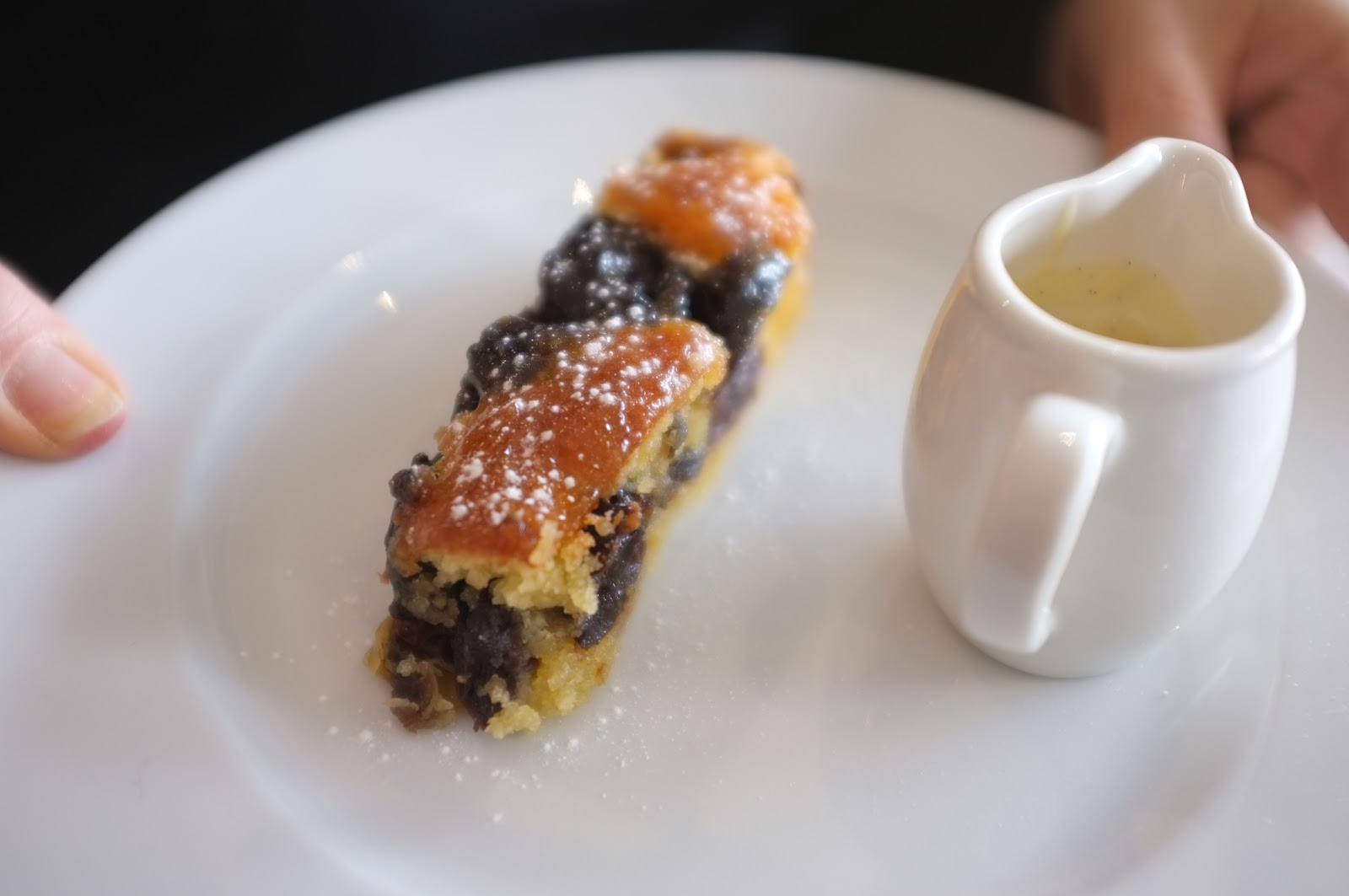 Lunch over and on to the play- I have never laughed as much at an eighteenth century play as I did at She Stoops to Conquer. Sarah Moyle was brilliant as Mrs Hardcastle.
Her occasional ad libs surprised others in the cast who rose to them. As in One Man, Two Guvnors, the actors created deliberate interaction with their audience. This further enhances the comedy because they develop a sense of audience complicity in the developing storyline. There is not a weak performance in She Stoops to Conquer. At the end the audience stood and applauded.

It is possible to spend a whole day at The National if, in addition to having a delicious lunch and catching a show, you take a backstage tour which only costs a few pounds. 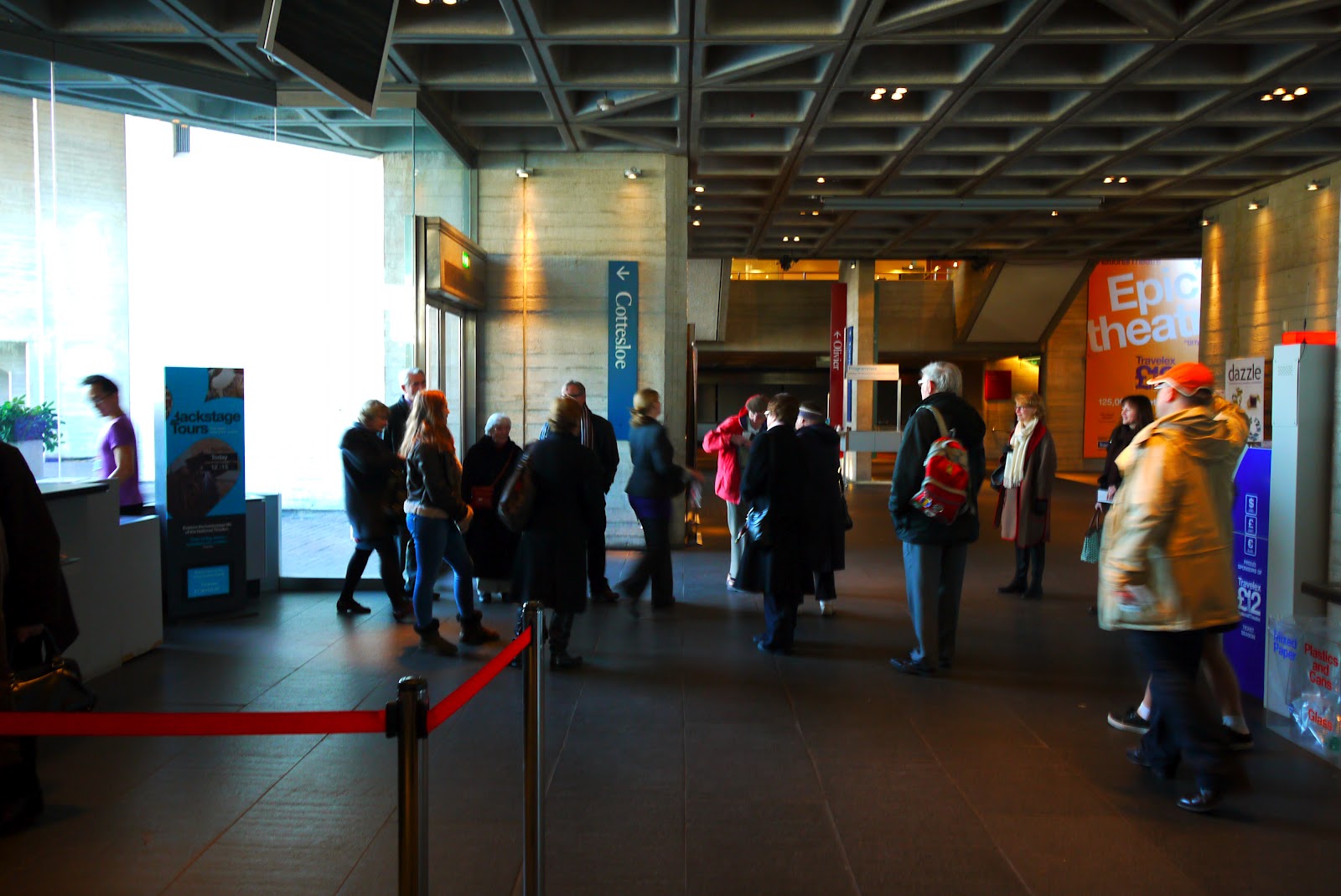 On the tour you will see how the sets are built on huge dollies, platforms with wheels, that are trundled back and forth as the repertoire changes from day to day. The meticulousness of the organisation can be judged from small detail such as props laid out on tables, each labelled with actor and scene. Period authenticity is evident in the detail. Bottles of Guiness for Juno and the Paycock had corks rather than steel caps. You may not photograph the backstage sets because the copyright of the sets belongs not to The National Theatre but to the freelancers who execute the designs. On the tour you will see the prop store, costumes, armoury, carpentry shop and much more. It is a fascinating insight into what goes on behind the scenes. You can even make a close-up acquaintance with one of the war-horse puppets. 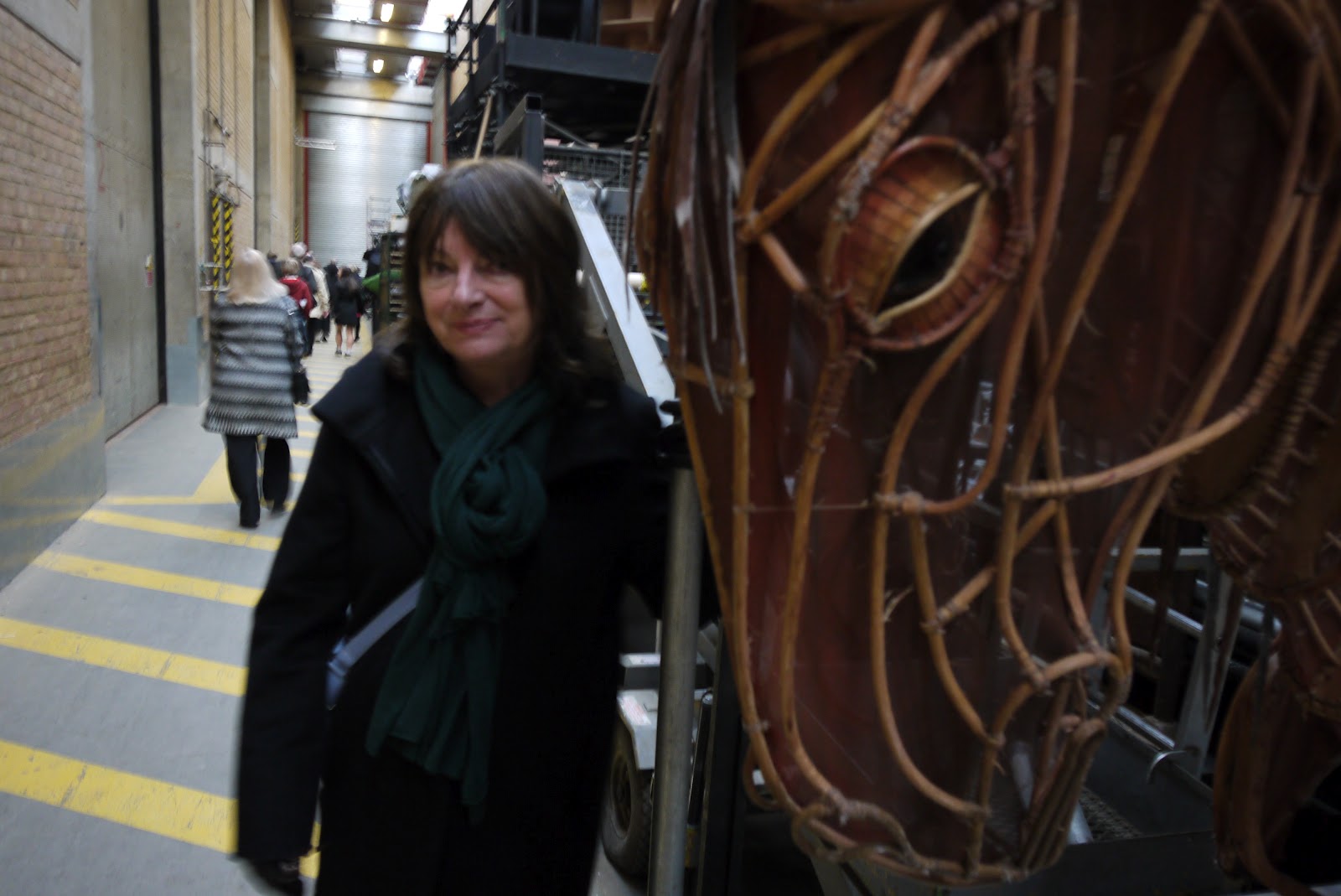 As the tour proceeds you will also see the dressing rooms and if you are lucky you might just bump into an actor in a backstage corridor or doing pre-show voice exercises on the dark Olivier stage. Our tour was conducted by a member of staff who was witty, entertaining and informative. 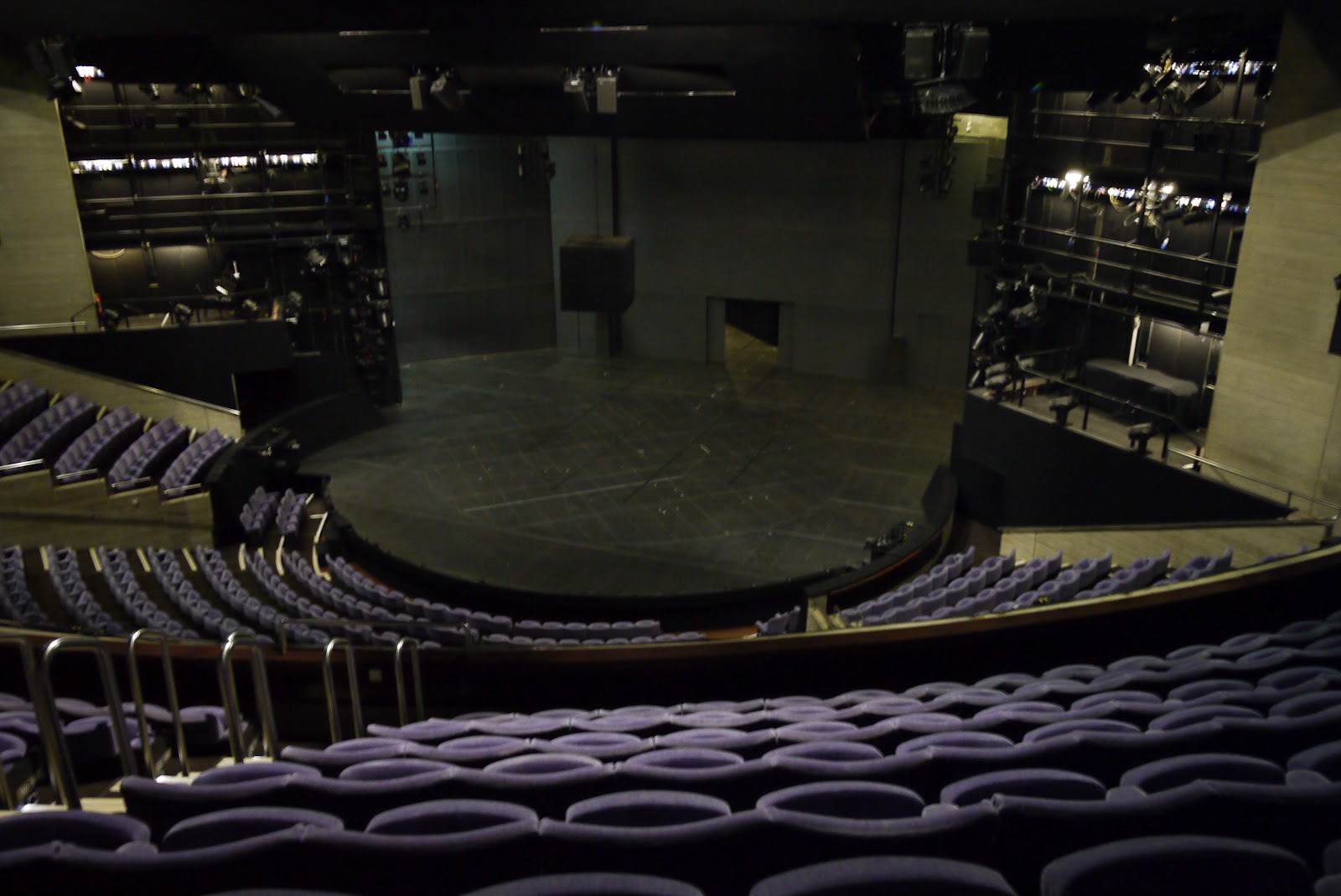 Exhibitions are constantly changing in the lobbies of the National Theatre. The current exhibitions are of London Print Makers and a collection of photographic portraits of actors present and past. Lunch-time musicans entertain in the ground floor lobby. The Bookshop has a comprehensive selection of books related to plays shown in the theatre over the years. There are often street entertainers and events with reference to theatre outside, spilling over onto the embankment, especially during the summer season. 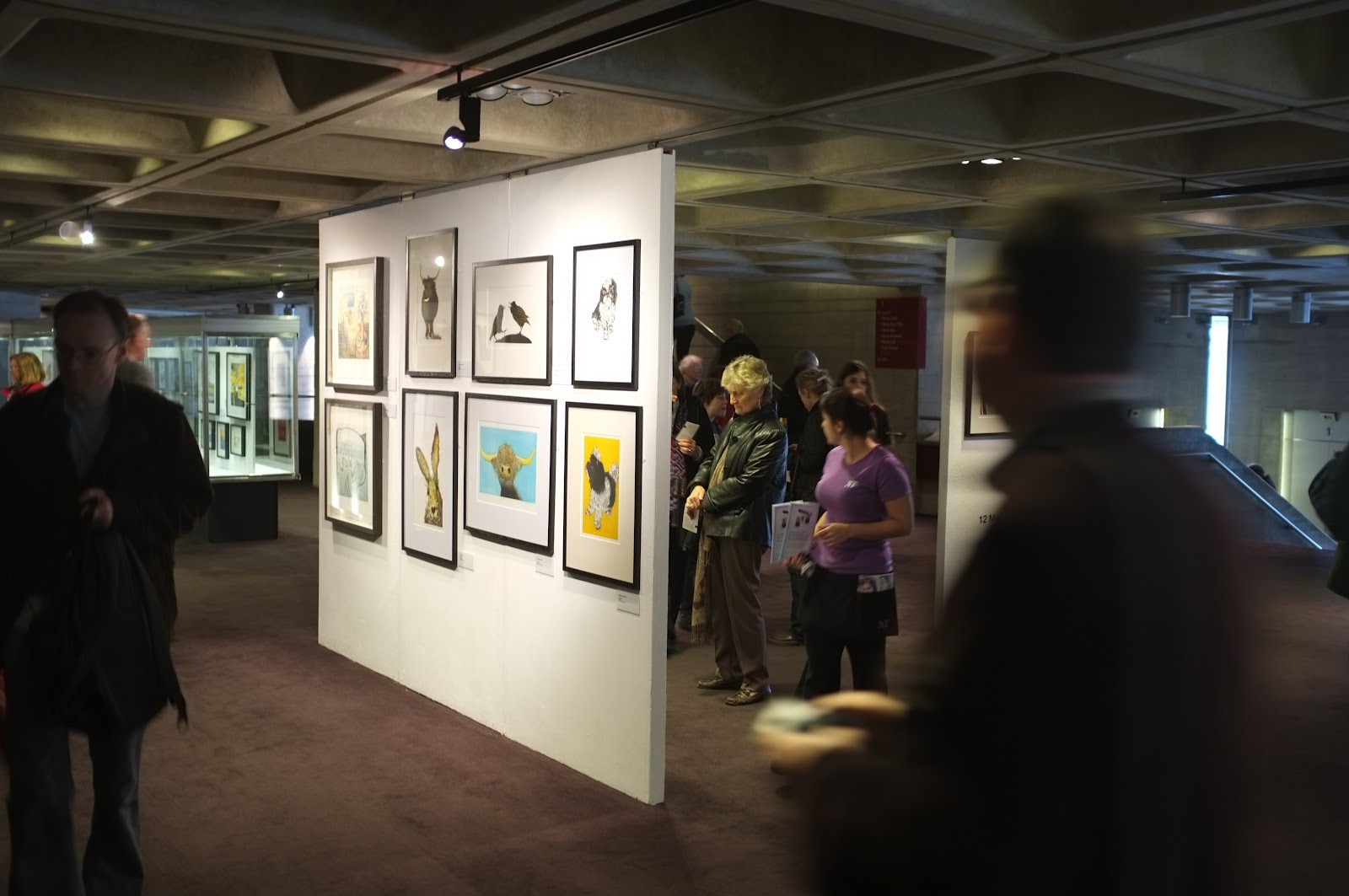 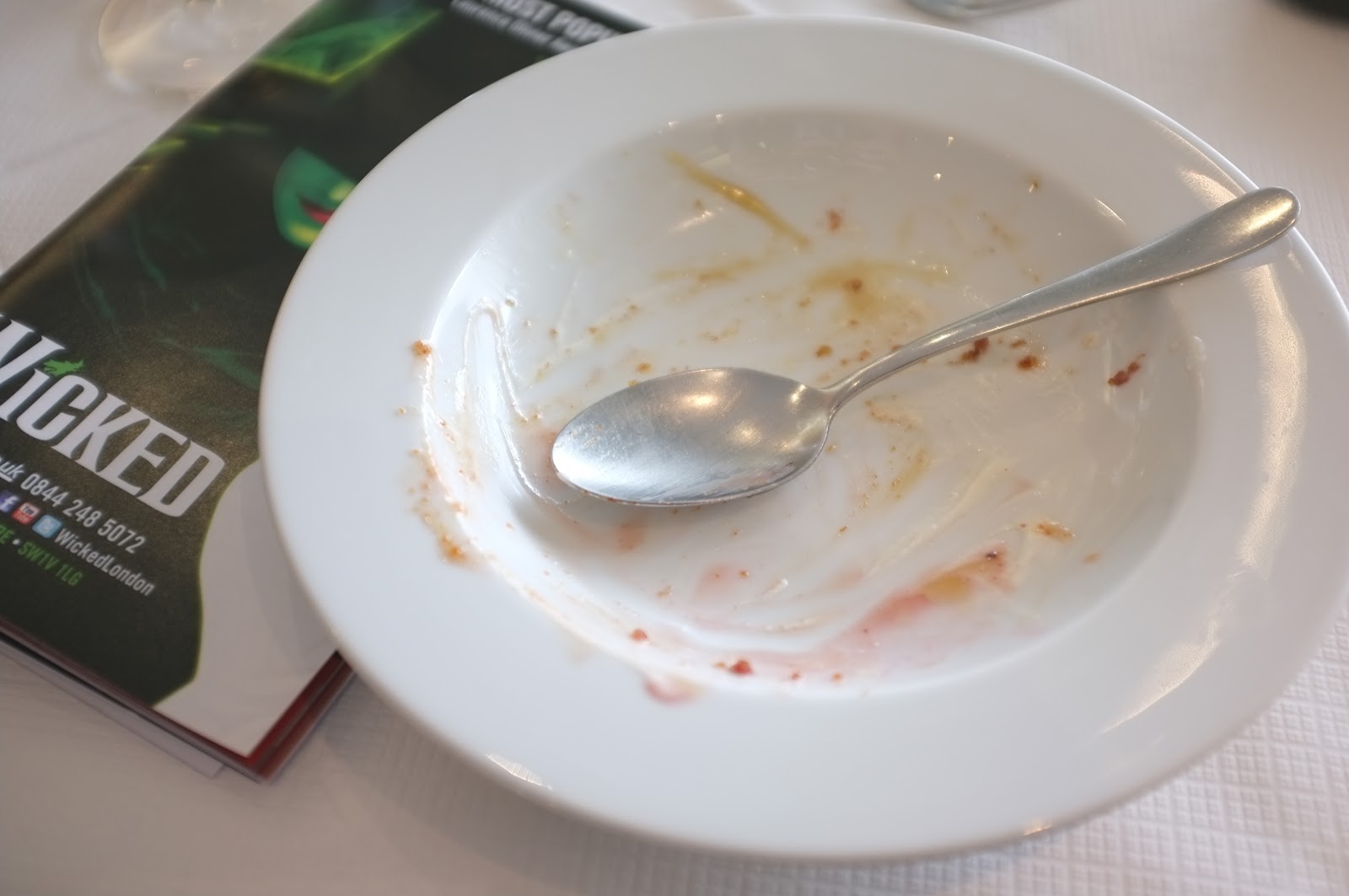 And finally a question. Have you seen something at The National Theatre that is memorable and that you would like to share? 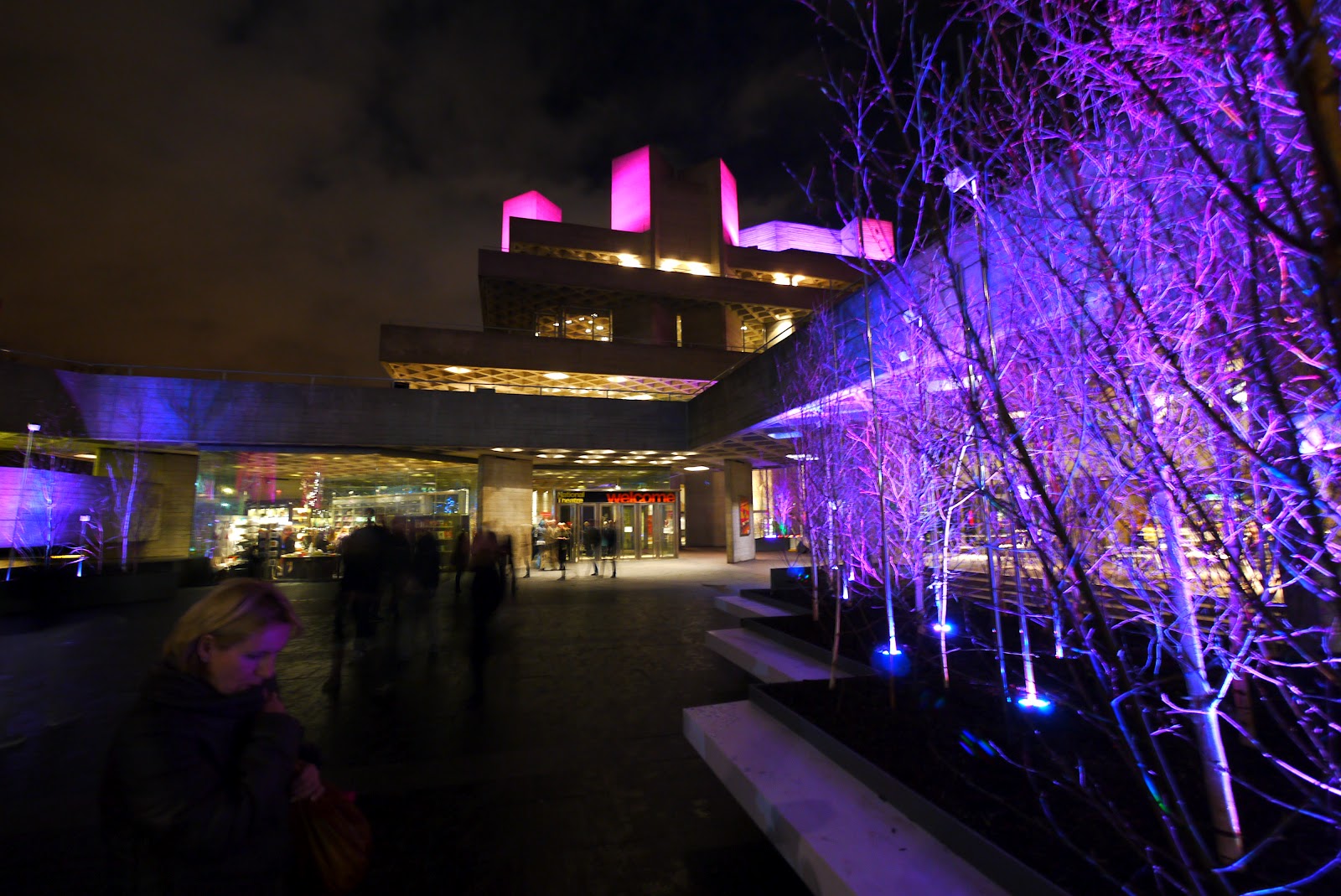