The Viking Exhibition at the British Museum is a must see for anyone interested in or who, like myself, is researching the era. It is huge. At the moment the exhibition is inundated with visitors but even so it is still possible to enjoy all of the displays. My particular research interest is focused on early medieval Denmark and Russia. 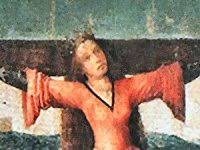 The Godwin ladies are in exile. Countess Gytha, King Harold II’s mother was aunt to the King of Denmark, Swein Erithson, and it is most likely that she travelled there with her grandsons and her grand-daughter. It is recorded in chronicle that Swein of Denmark harboured Harold’s sons and that he brokered a grand marriage for Gytha’s grand-daughter with one of the triumvirate of princes in medieval Russia. This was not an unusual alliance. The mother of the Aethling Eagar was Agatha a daughter of the Grand Prince of Kiev, Iaroslav. Elizaveta of Kiev, another daughter, was married first of all to Harald Harthrada and after his death at Stamford Bridge to Swein Erithson of Denmark. The ruling Rus of the 11thC were also of Viking descent. Consequently there is much of interest from 11th and 12th C Rus in this exhibition. By the 11th C the kingdom of the Rus was culturally a mix of Viking and Byzantine influence. Importantly during its golden age, the Rus cities controlled important trade routes east. Medieval Kiev was stinking rich!

My third novel in The Daughters of Hastings Trilogy concerns King Harold’s eldest daughter Gytha, called Thea in the novel to avoid confusion with her grandmother. She was married to Vladimir of Kiev circa 1073. Vladimir, like Thea, was born in 1053. In his later life became one of the most famous of the Rus princes of The Golden Age of Kiev and the Rus cities. These Rus princes never took the title of king but there was an interesting succession arrangement in place which allowed the succession of a son on the death of his father only if his father had been a High Prince himself. Disputes and jealousy followed. This caused two major periods of internecine conflict. The second major conflict occurred during the 1070s. What a situation for Princess Thea to arrive into when she travels to Norgorod to meet her prince and then faces delay to her grand marriage after her proxy betrothal to young Vladimir some years earlier. 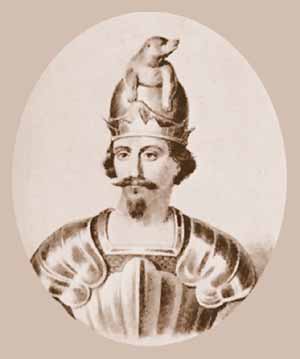 Vladimir’s uncle, Iziaslav, was Grand Prince first in the 1050s, 60s and early 70s. He was forced to flee to Poland when his throne was contested in 1068 by a cousin, the son of the deceased eldest prince. This cousin did not succeed to the throne because of the Rus succession policy. The final straw came for the people of Kiev when Iziaslav was unsuccessful in repelling an attack from steppe nomads. They wasted no more time and instead threw him out and put Cousin Vseslav on the throne. Iziaslav, undaunted, returned a few years later with a Polish army. Determined to avoid terrible reprisals, his two brothers travelled from their princely cities and accepted him back on the behalf of Kiev. Yet Iziaslav lost his throne again another time. Thanks to his brother Vladimir’s father, he was allowed back after some tricky negotiations involving the second best city Chernigov.

When Iziaslav died in the late 1070s he was followed on the Kievian throne by the next living brother, Vladimir’s other uncle, and then finally by Vladimir’s own father, Vsevolod who was by then so failing in health that Vladimir took on the job of ruling. The senior princes were in charge of other Rus cities. For example, The Grand Prince’s eldest son was always set up in Novgorod whilst the senior brother got Chernigov. The next in line got the outlying important and very wealthy city on the edge of the steppe, Periaslavl. At one stage in his life Vladimir was prince of Periaslavl as it had been his father’s chief city.

So the Viking Exhibition has allowed me to understand just how closely this world was interlinked, how far traders travelled, the luxury goods that were their currency, the fabrics, the Frankish swords, the spices. It also had many beautiful artefacts from medieval Rus. The Norwegian Viking world was ended with the defeat of Harald Hathrada at Stamford Bridge. The Viking influence on England mostly disappears after the 1066 invasion of William of Normandy, of Viking descent himself. The old Viking influence in the lands of the Rus becomes absorbed into the fabulous Golden Age of Kiev and Novgorod, from the 10th to the 12th centuries. The Viking heritage leaves a marvellous legacy within both Ukraine, and indeed, Russia’s early medieval world. The lands of the Kievian Rus become increasingly Byzantine, always cosmopolitan, absorbing new ideas and other cultures until the Tartar invasions of the mid thirteenth century.