The domestic institutions of medieval society faced change around the year 1000.
The Church reorganised itself in a great reform movement and during the eleventh century tried vigorously to shape and direct secular society. It developed a canon law of marriage. The Church also successfully claimed the right to judge marriage cases within its own courts. The ages and the terms of marriage shifted. Although the changes were most visible in Italy they were soon evident throughout Europe. For example the Germanic ceremony of handfasting, a ceremony where the two parties agreed betrothal and marriage and the families of the bride and groom agreed the dowry and the groom’s gifts to the wife, undergoes change. Before Gregorian reforms the marriage ceremony simply included the marriage contract, betrothal and a ring of fidelity which the groom placed on the bride’s finger.This was understood as handfasting and the ceremony did not have to have a priest’s blessing. Hands were often tied with ribbons and rings exchanged. The dowry was exchanged with an agreement in the presence of persons invited from both sides. After a suitable interval both bride and groom were brought to marriage vows. 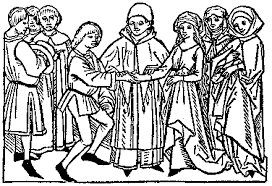 ﻿
﻿And so canon law replaced the secular codes during the eleventh century. Before, fathers controlled the giving of son or daughter into marriage. Now with Church reform, consent alone was sufficient for a valid marriage. Now debate arose as to whether physical union rendered the marriage binding. It was a delicate matter which throws back to the issue of the marriage between Mary and Joseph which though a marriage was never sexually consummated according to the Church was, none the less, a marriage.

Two notions existed in the religious debate concerning marriage. When partners expressed their consent the couple entered into a ‘matrimonium initiatum’ and the subsequent sexual union confirmed the marriage. The sexual union mattered. However, another view emerged in France and this was that to marry the bride and groom only need express their consent in words of the present tense. A promise through words of the future tense was only a betrothal and not yet a marriage and could be annulled. This doctrine from France was endorsed by pope Alexander III in the mid twelfth century so that the spoken consent of the partners alone in the present tense made the marriage valid and binding even without sexual intercourse. This explains the great fuss over whether Ann Boleyn was, in fact, married to Harry Percy. Ann Boleyn did not even have to have had sexual relations to be considered wed. Therefore, Percy was questioned and sent away when Henry VIII expressed his interest. 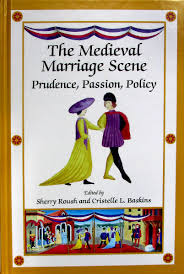 ﻿The Church however insisted that the couple seek the blessing of a priest. The endowment of the bride ‘in the face of the church’ was principal proof that a legal marriage had been contracted. Failure to obtain the nuptial blessing, to endow the bride or to publish the banns of marriage were impediments that rendered the marriage illicit but not invalid. The marriage would stand but the couple could face penances.

A father could not force a son or daughter into an unwanted marriage nor prevent him or her from marrying. A father, therefore, was helpless in the face of an elopement. The church doctrine was a blow to paternal authority in the medieval household. This also meant that a daughter could be treated as a marginal member of her father’s lineage as patrimonial and kindred ties lessened. Women began to lose claim to a fair share with her brothers in the family patrimony. The dowry marked the limit of material support that a woman would receive from her original family. 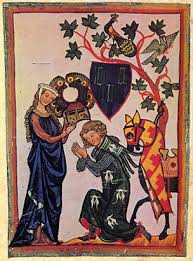 In the two novels I have been writing women are affected by the changes brought to marriage during the eleventh century. Edith Swanneck was set aside by Harold II who made a political marriage in 1066 or thereabouts and could do so because the pair had been married in the old style of handfasting, a marriage not yet subject to Gregorian reform. Their daughter Gunnhild in the 1070s eloped or was abducted from a monastery/convent and married Count Alain of Brittany, possibly another handfasting if indeed there ever was a formal wedding of any kind. She was an inmate of Wilton Abbey under the protection of the Church. However, once Gunnhild eloped with Count Alain there was no recall, though later when after Count Alain’s death she took up with his successor, Archbishop Anselm tried to persuade her to return to Wilton. She never did and her marriage seems to have stood.