How Did the Tudors ‘Do’ Contraception? 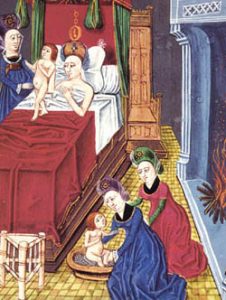 Childbirth was joyous but fraught with dangers

What if a woman or man wanted to avoid having children during the Tudor Era? Official medicine stayed away from this particular desire on the part of a couple. Folk medicine did not. For as long as people have had sex, despite serious Church objections, there have been methods of preventing pregnancy. 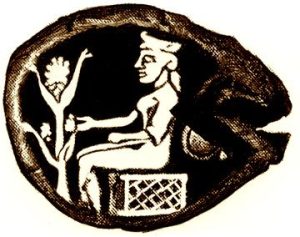 First up is the condom, or Venus glove as it was known at the time, which actually started as a form of venereal protection. Syphilis spread throughout Europe during the sixteenth century. It was a horrible disease and medical cures just as terrible. It was first recorded in Naples in 1495. De Morbo Callus, written in 1514, describes the progression of the disease: it caused skin lesions on its victim, lesions on bones and it attacked the brain in its later stages. An unpleasant secondary symptom is the loss of bodily hair. Mercury, which was used to deal with its symptoms, was ground, drunk, injected or applied to its sores and resulted in further hair loss, swollen gums and rotting teeth.  Gabriele Falloppio (1623-1562) tried to fight the advance of the ‘French disease’ as it quickly became known (or ‘English disease’ in France) by advocating a fabric sheath fitted around the glands of the penis to prevent transmission. The sheath had to be soaked in a mix of wine, ashes, mercury, wood shavings and salt. The problem was that he instructed that the wrap be applied after sex rather than keeping it in place during sex. It would cleanse the penis of infection. Naturally, it was useless.

Condoms came to be used as rudimentary methods of preventing pregnancy and were generally made of fish gut and were washed and reused. These would have been tied to the penis by a ribbon or fine string. There was a plethora of other rudimentary and bizarre methods of contraception. A lemon slice could be used as a cervical cap. Avicenna, the Arabic physician, as early as the eleventh century suggested the pulp of pomegranate mixed with alum made a useful pessary which could be inserted before coitus and a second pessary used afterwards. Alum was an efficient spermicide and also it made the mucus membrane of the vagina contract. Alum could even restore the vagina stretched by childbirth back to a normal size. Rock salt mixed with an oily material was yet another method believed to destroy male sperm.

Other methods of contraception used at the time included a sponge inserted into the vagina or a plug of wool soaked with honey or wine to form a barrier. Drinking tincture of lead might introduce sterility but it could give rise to poisoning. Likewise, eating seeds of the castor oil plant was a dangerous, poisonous notion. Those desperate to prevent conception often used magical medicine. One recipe was marrow powdered and made into an infusion. Another method was finely ground leaves of barren-wort taken in wine for five days after the menses to prevent conception. Its roots caused sterility. Pulverised berries of ivy drunk after purification could also bring about sterility. An infusion of marjoram taken during the menses could introduce sterility for a month as could the oil of pea taken regularly.

The practice of coitus interruptus had long been a method of contraception but it was not condoned by the Church. In fact, wasting one’s seed was considered almost as sinful as ending a life already in existence. Saint Thomas Aquinas was a Dominican Friar whose views were adopted by Catholic Church. These were set out in 1261 in Summa Theologica in three parts and reflect the Church’s attitude towards birth control. Anything that hindered the generation of offspring was considered as taboo. According to Genesis 9:7 the birth of children was essential and would remain central as humans were to ‘increase and multiply.’ One must remember that in this period the Church, ironically, considered female orgasm medically desirable and legitimate because if a woman had an orgasm she was, it believed, more likely to conceive a child. There is no evidence that most women were supposed to be frigid in this period and there is none from medical literature or from sayings or proverbs either about the ‘natural lustiness of women.’ It is easy to conclude that for many the Church view on this was often ignored.

Fear of unwanted pregnancy existed in all classes of people. Henry VIII’s fifth wife, Kathryn Howard, was famously reported to have said ‘a woman might meddle with a man and yet conceive no child unless she would herself.’ A man was expected to have gained sexual experience before marriage. Fornication and adultery were exclusively male prerogatives even though women were considered by the Church as more lustful in attitude and also more fickle than men. The strictest standards of sexual behaviour were imposed on women and enforced by all the legal, moral and religious pressures society could impose. Women were the sexual property of men and a high value was attached to female chastity in the marriage market. After all, as mentioned above, there could be no doubts about the legitimacy of an heir. 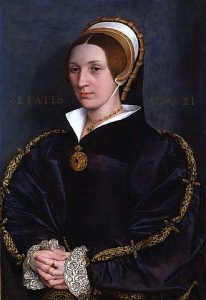 In ancient Greek medicine the word ‘hysteria’, which described a feminine illness, was derived from the word uterus. It was attached to the notion of a ‘wandering womb’. A wandering womb was a valid medical state associated with childbirth, referring to a displaced womb. Practitioners needed to wrangle the womb back in place to its original position. It was not an unusual practice to drive the womb back down by waving the foul smells created by burning feathers, wool or linen over a woman. Equally, sweet-smelling spices and herbs were used to fumigate the vagina and tempt the womb down. 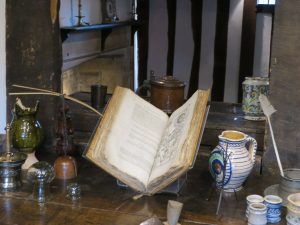 Urine as a Diagnostic Tool

Urine, as a diagnostic tool, was shaken and stirred. Another odd consultation chart carried by doctors, known as a ‘penis tree’ usually showed a wheel of fortune sprouting from a tree. Each branch of the tree showed a different broad diagnosis of illness. The outer layer offered colourful descriptions that could be matched to the urine’s sample shade.

The Tudor view of gender and sexuality possessed a degree of duality. On the one hand there was the elegance of courtly love, and on the other, to our twenty-first century minds, an eroticism as suggested by the doctor’s urine chart depicting a penis tree. The significance of penis and womb was understandable because, of course, reproduction was the major purpose of sex. No wonder that Henry VIII, who was expert at the game of courtly love, was overjoyed to have produced a much longed for male heir with his third wife, Jane Seymour. 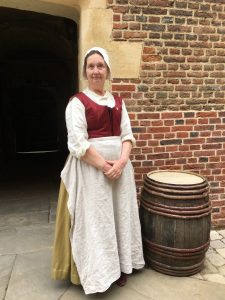 Following a first degree in English and History, Carol McGrath completed an MA in Creative Writing from The Seamus Heaney Centre, Queens University Belfast, followed by an MPhil in English from University of London. The Handfasted Wife, first in a trilogy about the royal women of 1066 was shortlisted for the RoNAS in 2014. The Swan-Daughter and The Betrothed Sister complete this highly acclaimed trilogy. Mistress Cromwell, a best-selling historical novel about Elizabeth Cromwell, wife of Henry VIII’s statesman, Thomas Cromwell, was republished by Headline in 2020. The Silken Rose, first in a Medieval She-Wolf Queens Trilogy, featuring Ailenor of Provence, saw publication in April 2020. This was followed by The Damask Rose. The Stone Rose was published April 2022. Carol is writing Historical non-fiction as well as fiction. Sex and Sexuality in Tudor England was published in February 2022. Carol speaks at events and conferences and was the co-ordinator of the Historical Novels’ Society Conference, Oxford in September 2016. The Stolen Crown about The twelfth century Anarchy will be published next year. It is available on Amazon pre order. She is an avid reader and reviews for the Historical Novel Society and is a member of both the Romantic Novelists’ Association and Historical Writers Association. Carol lives in Oxfordshire with her husband. Find Carol on her website:

To Buy Link: Go to Pen and Sword’s Home Site, your local bookshop or find on Amazon 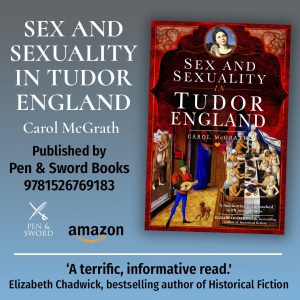