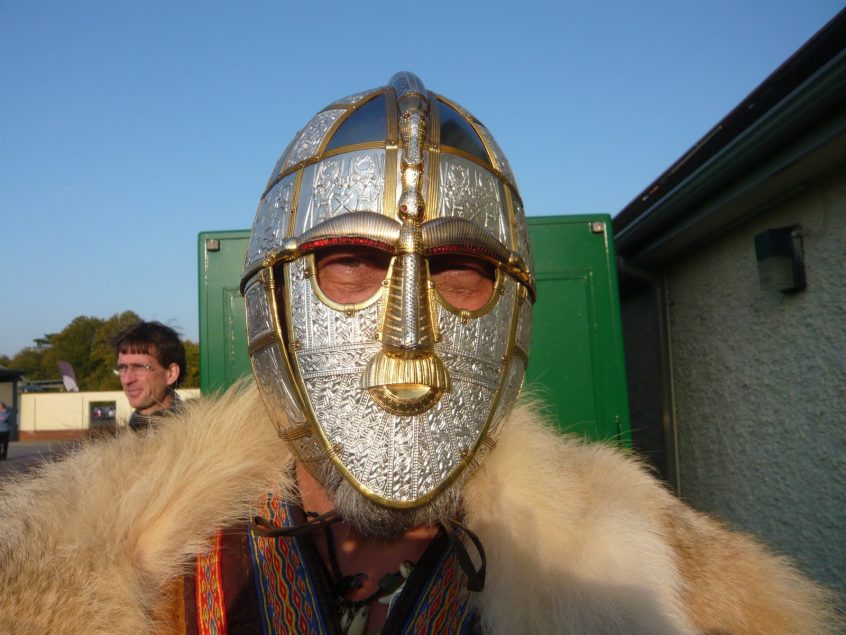 On Sunday I made the trip to Sutton Hoo for the first time. This is the site of a 7th century burial, a spectacular Saxon ship and mound graves containing grave goods which tells us much about life in East Anglia during the seventh century. The National Trust Museum on the site brings to life the treasure that was unearthed here. Sutton Hoo is of a primary importance to historians because it sheds light on a period of English history which is on the margin between myth, legend and historical documentation. Use of the site culminated at a time when the ruler of Anglia, Redwald held senior power among the English people and played a dynamic if ambiguous part in the establishment of Christian rule in England; it is generally thought most likely that he is the person buried in the ship discovered here. Importantly, the site has been vital in understanding the early Anglo-Saxon period, in particular East Anglia. 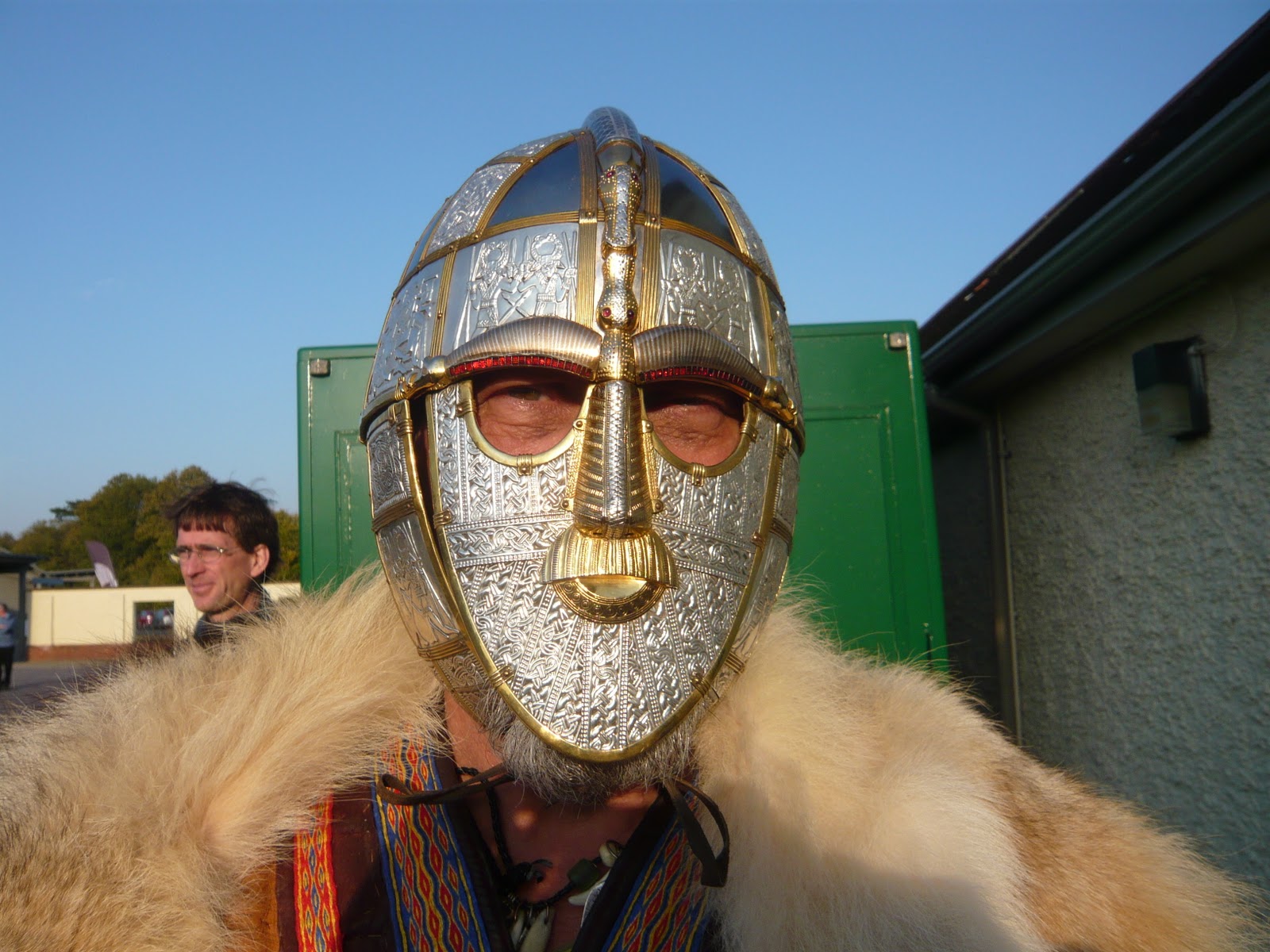 Paul Mortimer, author of Woden’s Warriors models the helmet
The purpose of my visit was to attend a one-day seminar about History and Fiction in the Age of Sutton Hoo. Local authors of historical fiction and non-fiction set in Anglo-Saxon England discussed their work.These writers included writer P.M. Sabin Moore, Paul Mortimer, Steve Pollington and Carla Nayland, author of a fiction set in Anglo-Saxon Northumbria titled Paths of Exile. 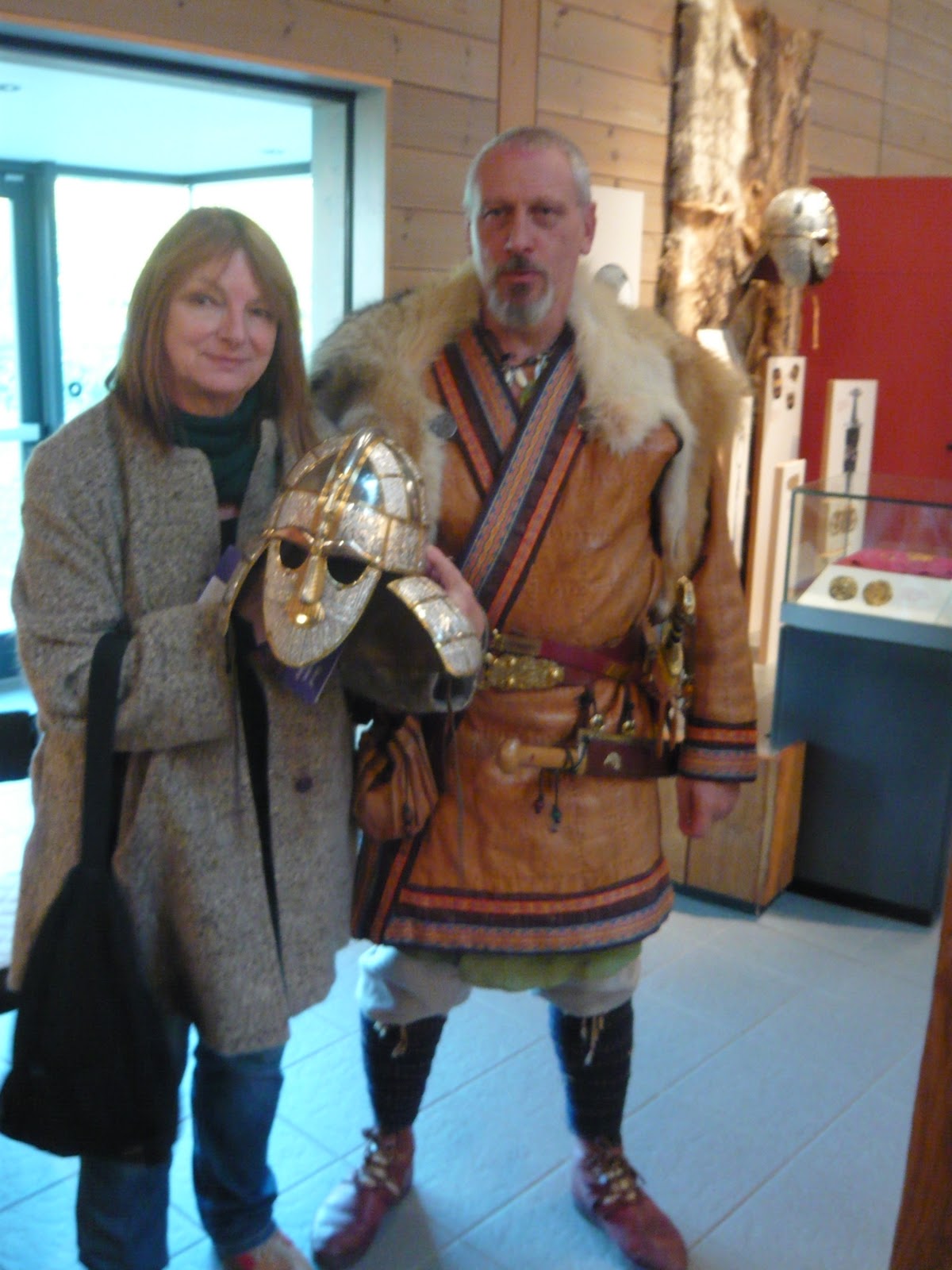 The highlight was finding out what Paul Mortimer (above) and Steve Pollington thought about handfasting. Paul has written a non fiction study of Anglo-Saxon warrior culture, Steve’s books on Anglo-Saxon history and culture are highly regarded for their basis in archeological research.

It is probable that a whetstone was used in the handfasted ceremony. The whetstone was important in oath taking as well as its traditional use for sharpening ceremonial swords. Weighing around six kilos, it had an significant place in the culture of a Saxon mede hall. The replica I saw on Sunday was exquisitely decorated with stone carvings depicting a man and a woman, thus indicating its possible use in the handfasting ceremony. On the whetstone’s top a golden deer stands proudly on a very large golden ring. In this ceremony the bride would face the groom as they made their oath to eachother, their hands clasping the ring at the top of the stone. Interestingly, the groom would give a bride price for his intended, rather than the traditional situation we know later, the provision of a bride’s dowry from her family. These historians suggest that handfasting continued throughout the Anglo-Saxon period. 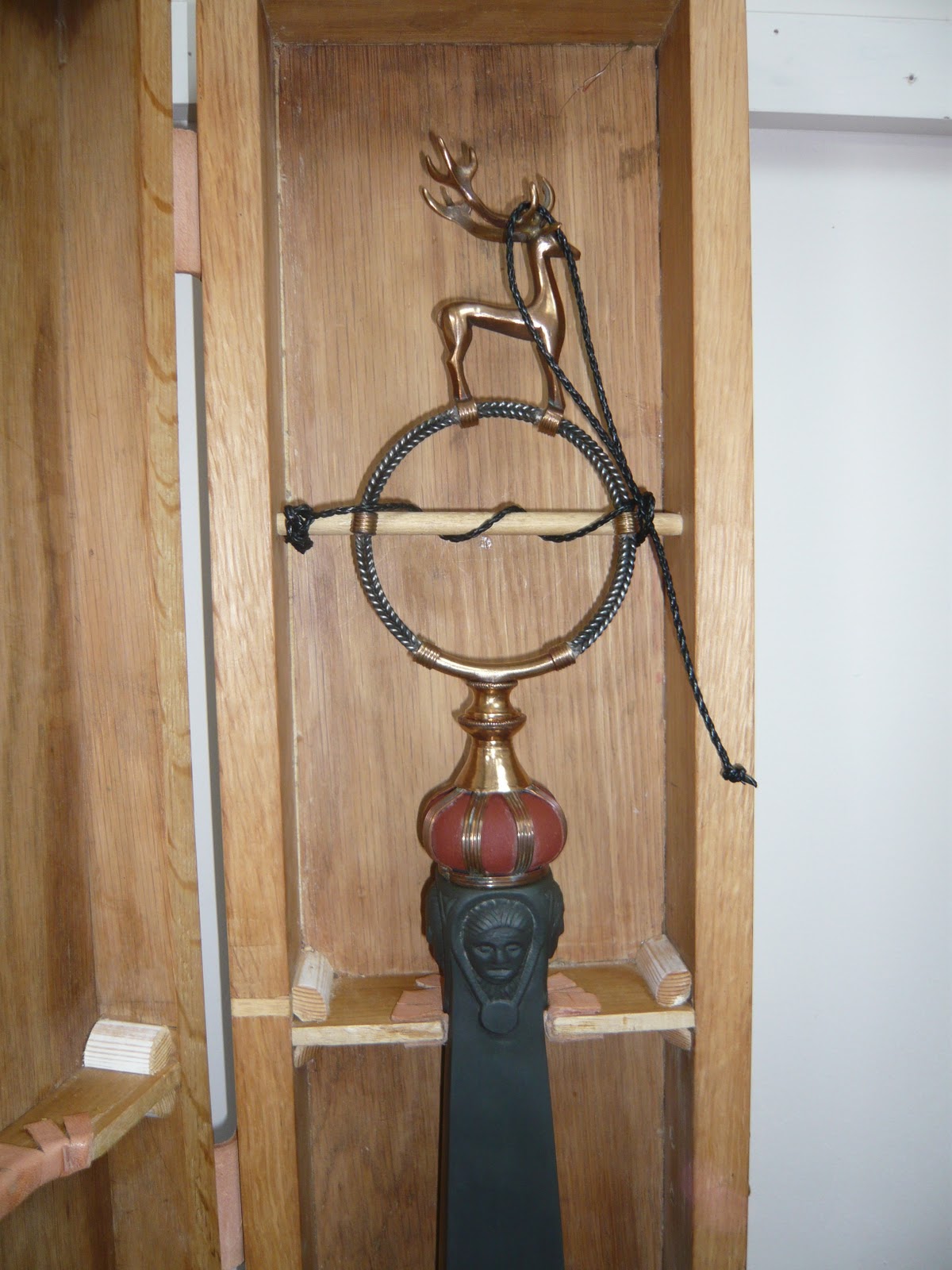 The Anglo-Saxons often made marriages to create new kindreds out of existing foes thus the notion of the women as peaceweavers.

High status women could hold political influence. Kings and princes might ask their advice as they did of Abbess Hilde in the 600s.

Women owned property and made wills. Places were named after them. Look at maps and you should find female names from Saxon times.

Women had distinct social roles. As early as the 670s Queens had their separate households. These included weaving, advising, managing resources and as practitioners of medicine. From this period we have the notion of the ‘distaff’ side. Women served the mede horn in the Hall and they traditionally made speeches when their menfolk returned from battle. 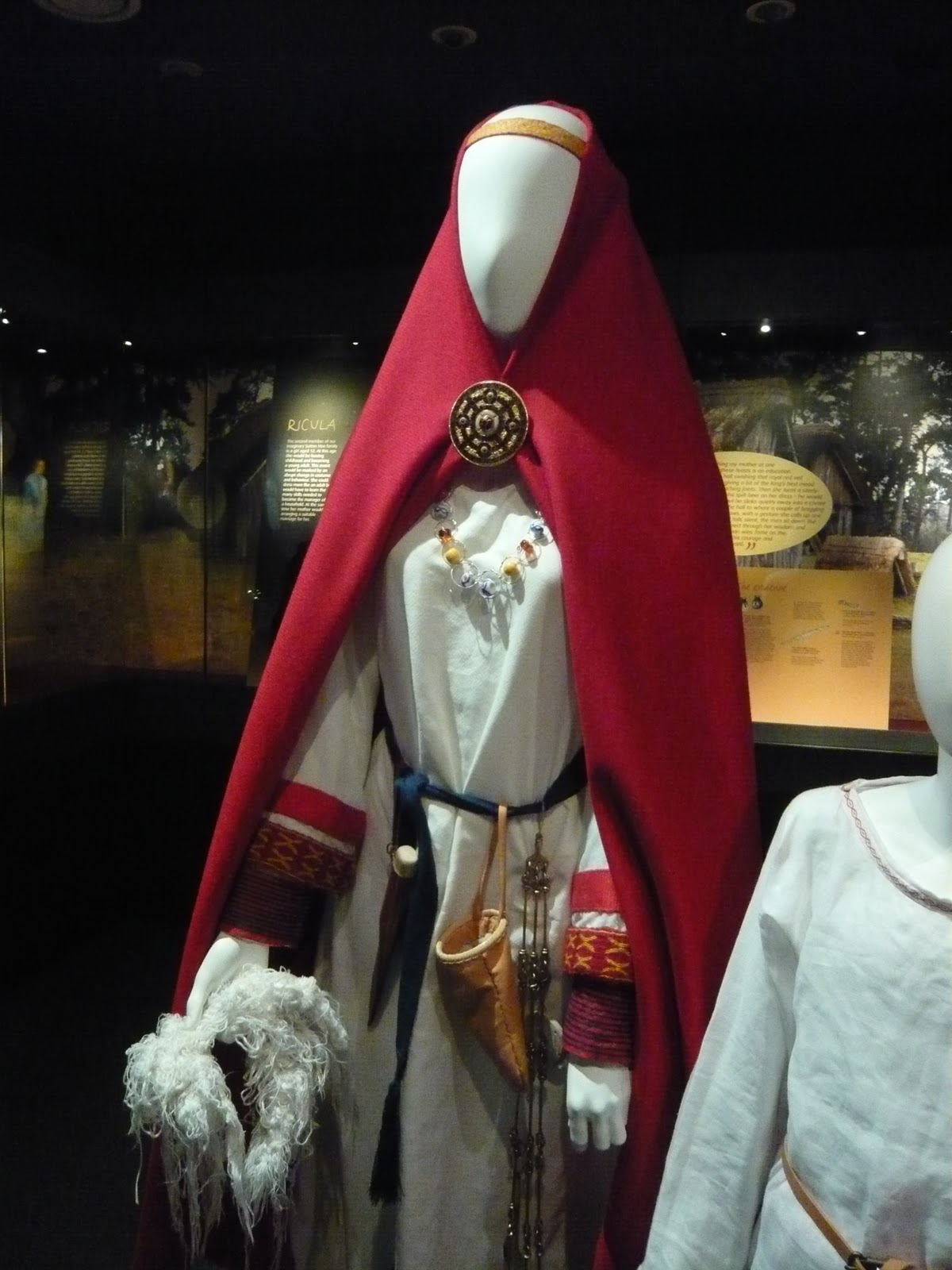 The magic of Sutton Hoo lingers in that gentle Suffolk coastal territory. The wealth this society possessed is illustrated by their gorgeous jewellery, the sapphires, the rubies, rare blue glass and garnets and gold. It is possible to imagine a king wearing the magnificent engraved golden helmet, pictured at top of blog, with its garnet eagle eyes watching as we trespass on their past. And as the sun set and I headed home, I hoped that the ghosts of Sutton Hoo had not minded too much that we, had but briefly passed through their world.