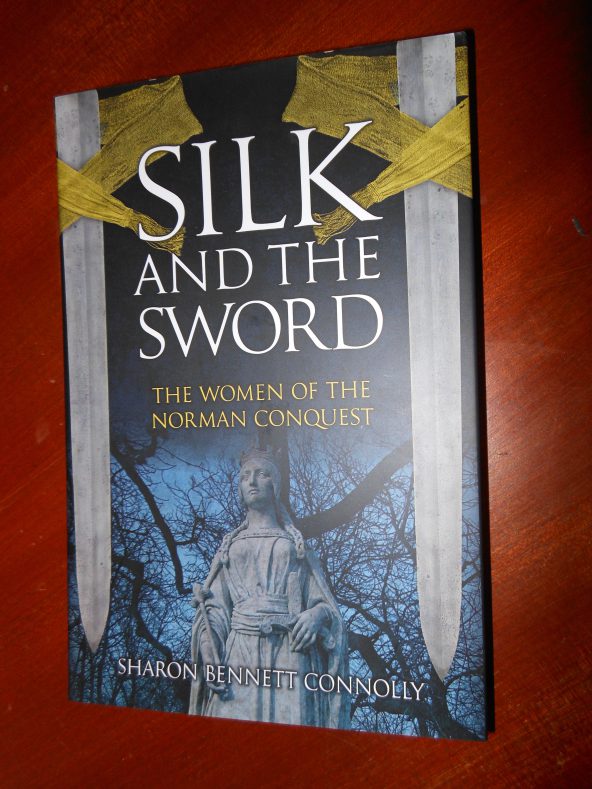 Today I welcome Sharon Bennett Connolly to The Writer’s Hub. Sharon writes Historical non-fiction. Please read about her below and then enjoy her seven interesting discoveries about writing eleventh century non-fiction. I have often been tempted to write about eleventh century women in non-fiction myself, having researched many women from the period but I am too busy writing novels. I can vouch for the fact that Sharon’s work is fascinating. You’ll want to read more… 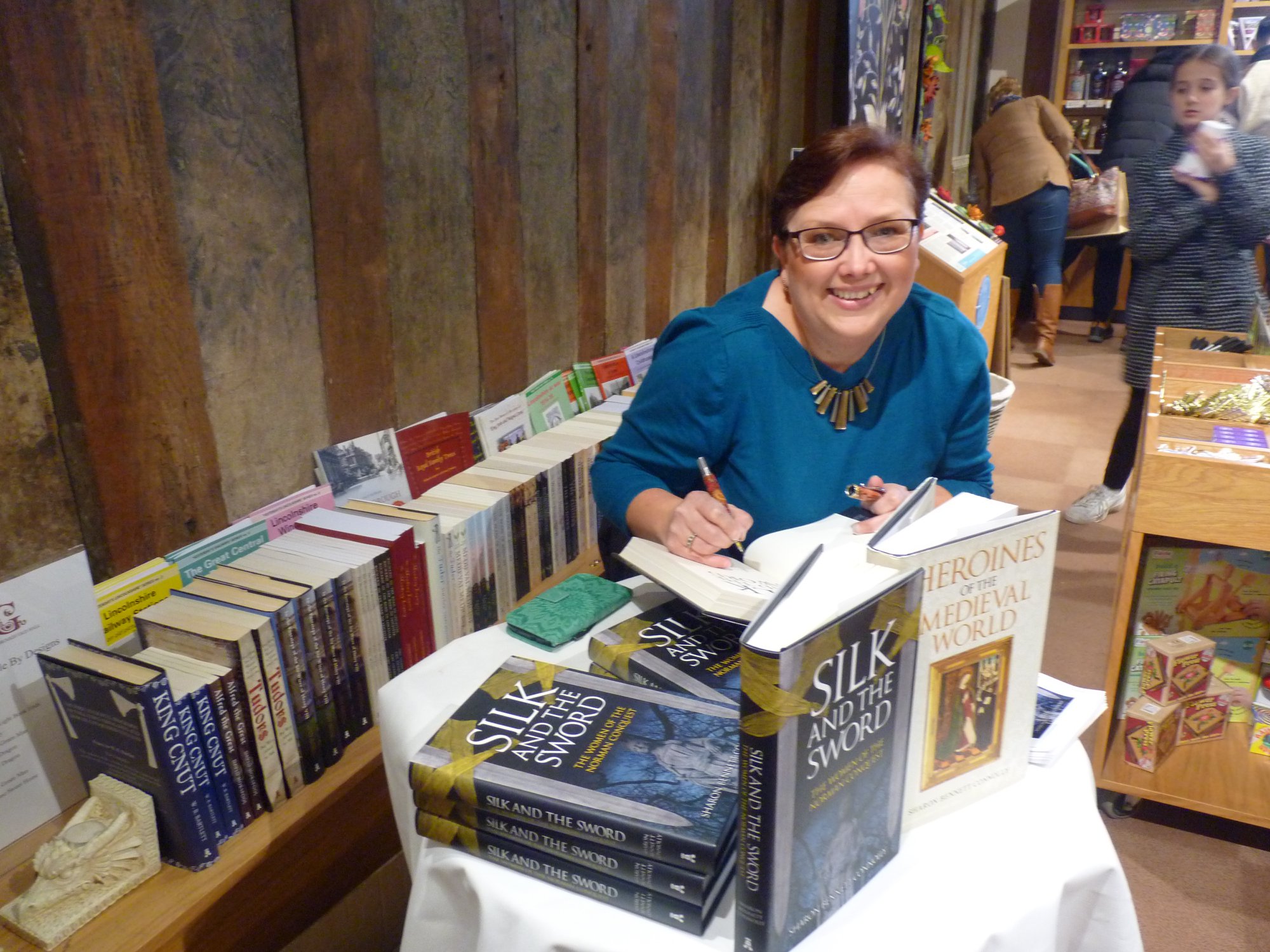 Sharon Bennett Connolly has had a lifelong fascination with history. She has studied academically and just for fun – and even worked as a tour guide at historical sites, including Conisbrough Castle. Born in Yorkshire, she studied at University in Northampton before working in Customer Service roles at Disneyland in Paris and Eurostar in London.
She is now having great fun, passing on her love of the past to her son, hunting dragons through Medieval castles or exploring the hidden alcoves of Tudor Manor Houses.
For Christmas 2014, her husband gave her a blog as a gift – History … the Interesting Bits (www.historytheinterestingbits.com), allowing her to indulge in that love of history. Sharon started researching and writing about the lesser-known stories and people from European history, the stories that have always fascinated. Quite by accident, she started focusing on medieval women. And in 2016 she was given the opportunity to write her first non-fiction book, Heroines of the Medieval World, which will be coming out in paperback in 2019. Sharon has just published her second non-fiction book, Silk and the Sword: The Women of the Norman Conquest, and is now working on a third, Ladies of Magna Carta.

1. Not all primary sources are contemporary.
Let me explain. Of course, all sources written in the 11th century are primary sources, but you do find people quoting sources as primary sources – only to discover that they were written 100 or even 200 years after the events.
One such legend, appearing two centuries after the events, suggested that Emma of Normandy’s relationship with her good friend, Bishop Stigand, was far more than that of her advisor and that he was, in fact, her lover – although the legend did get its bishops mixed up and named Ælfwine, rather than Stigand, as Emma’s lover. The story continues that Emma chose to prove her innocence in a trial by ordeal, and that she walked barefoot over white-hot ploughshares.
Even though the tale varies depending on the source, the result is the same; when she completed the ordeal unharmed, and thus proven guiltless, she was reconciled with her contrite son, Edward.
However, there is no 11th century source for this event and it seems to have been created to explain Emma’s estrangement from her son, Edward the Confessor. 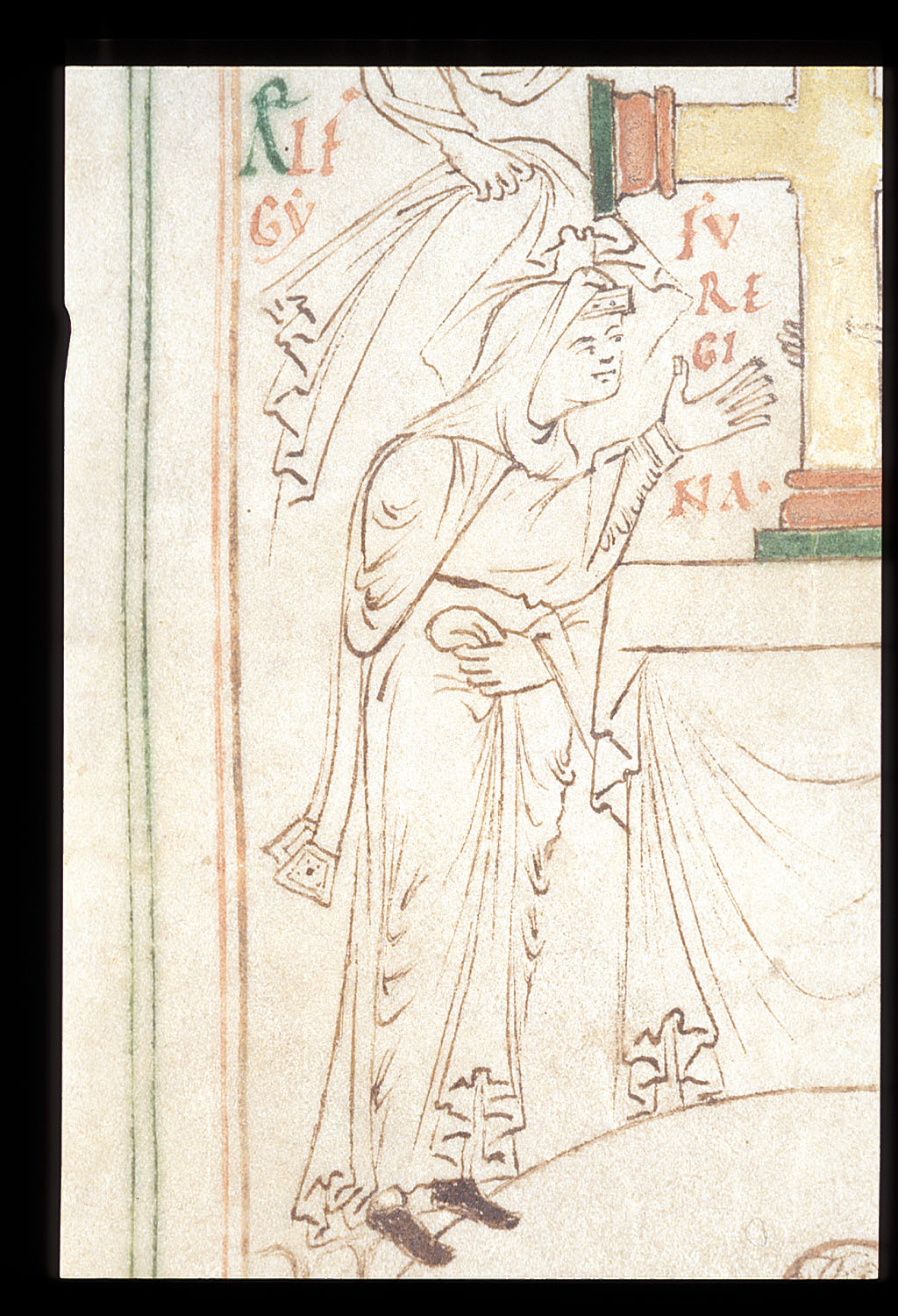 2. The Anglo-Saxon Chronicle is the most famous source of 11th century news. It gives wonderful snippets of information about life in Anglo-Saxon England – and the weather! It is very dramatic.
For example, the year 1005 starts with; ‘Here in this year there was the great famine throughout the English race, such as no-one ever remembered on so grim before…’ 1032 relates; ‘Here in this year appeared that wild-fire such as no man remembered before, and also it did damage everywhere in many places.’ And 1039 opens with ‘Here came the great gale…’ In 1053 we read, ‘Here [1052] was the great wind on the eve of the Feast of St Thomas, and the great wind was also all midwinter…’ And, of course, in 1066 we read about the appearance of Halley’s Comet; ‘Then throughout all England, a sign such as man ever saw before was seen in the heavens. Some me declared that it was the star comet, which some men called the ‘haired’ star; and it appeared first on the eve of the Great Litany, 24 April, and shone thus all the week….’

3. The Anglo-Saxon Chronicle is a fabulous source of news about church leaders.
Don’t get me wrong, the Anglo-Saxon Chronicle is invaluable to anyone studying the history of Anglo-Saxon Britain, but there are some years where you learn little more than which church leader died, and who replaced him. For example, the entry for 1023 from the E chronicle; ‘Here Bishop Wulfstan passed away, and Ælfric succeeded…’ And in 1032; ‘In the same year Ælfsige, bishop in Winchester, passed away, and Ælfwine, the king’s priest, succeeded to it.’ The only entry in the E Chronicle in 1033 was; ‘Here in this year Merehwit, bishop in Somerset, passed away, and he is buried in Glastonbury.’ And again in 1034; ‘Here Bishop Æthelric passed away.’

4. Not all inheritance was based on primogeniture.
The eldest son inheriting from his father was not unusual in 11th century England; when Earl Godwin of Wessex died, his eldest surviving son, Harold, succeeded him. However, this was not always the case. When Siward, Earl of Northumbria, died in 1055 his heir, Waltheof, was still a child and too young to hold such a formidable position on the borders of Scotland. The earldom was given to Tostig Godwinson, the favourite brother of Edward the Confessor’s queen, Edith. And in the opening days of 1066, when Edward the Confessor died, the ætheling, Edgar was only a teenager, and so was passed over as king for the more mature and militarily experienced Harold Godwinson, Earl of Wessex, who became King Harold II. 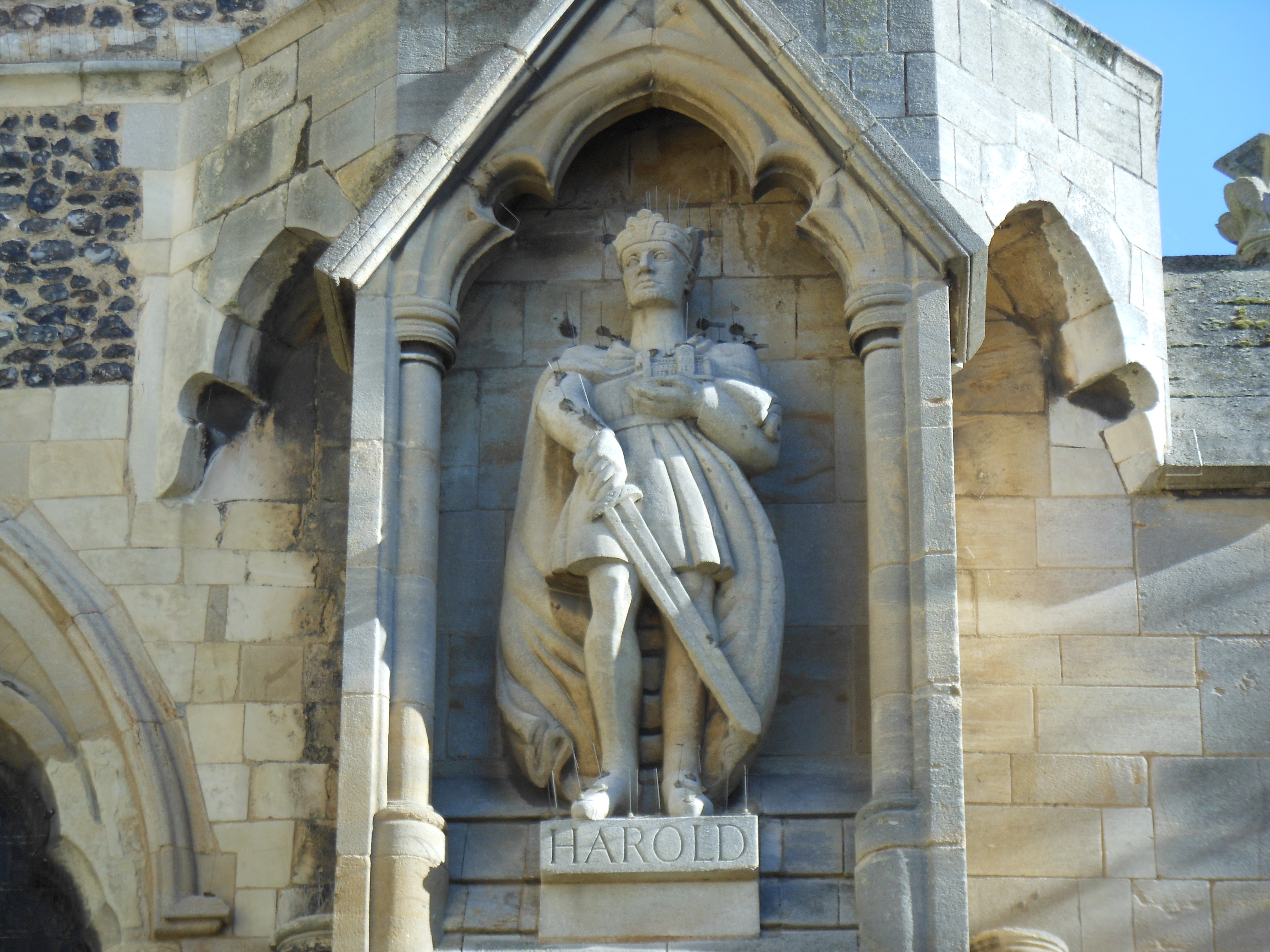 5. Travel to distant places was not uncommon for the nobility.
King Cnut and Tostig Godwinson are both known to have travelled to Rome; indeed, during his trip to Rome in 1027, Cnut was present at the coronation of Holy Roman Emperor, Conrad II and arranged for the marriage of his daughter by Emma, Gunhilda, to Conrad’s son, the future King Henry III of Germany. Travelling to Rome was not without its dangers, and shortly after leaving the city, Tostig’s party were caught up in a local dispute between the papacy and the Tuscan nobility; they were attacked. Tostig was able to escape by the ruse of one of his own thegns, a man named Gospatric, who pretended to be the earl.
And when I started writing Silk and the Sword: The Women of the Norman Conquest I discovered that there are several links to the story of 1066 with the Russian principality of Kiev. The baby sons of England’s short-lived king, Edmund II Ironside, who reigned and died in 1016, were given sanctuary and protection in Kiev, saving them from the clutches of Edmund’s successor, King Cnut. The first wife of Harald Hardrada, the third contender for the English throne in 1066, Elisiv, was a Kievan princess. And after the Conquest, Harold II Godwinson’s own daughter, Gytha, would make her life in Kiev as the wife of Vladimir II Monomakh and as the mother of Mstislav the Great, the last ruler of a united Kievan Rus. Vladimir was the nephew of Harald Hardrada’s first wife, the Kievan princess, Elisiv.

6. Having 2 wives at the same time was not THAT unusual.
In the story of 1066 there were not one BUT three men who had two wives simultaneously. Harold Godwinson is known for having been in a relationship with the famous Edith Swanneck for 20 years before becoming King, and then marrying Ealdgyth of Mercia without divorcing Edith. Edith is often referred to as Harold’s concubine, but most historians agree that she was his ‘hand-fast’ wife and had undergone a Danish – rather than Christian – style of wedding with Harold. Edith was no ignorant peasant, she was a wealthy woman in her own right and it is highly doubtful she would have accepted being Harold’s mistress, and raising his children, without some kind of marital protection.
Harald Hardrada also married a second ‘wife’, whilst still being married to Elisiv. Elisiv had given the Norwegian king two daughters, but his second wife, Thora, gave him two sons, Magnus and Olaf, who each succeeded their father as King of Norway.
King Cnut was the first to take two wives; he had two sons by Ælfgifu of Northampton before marrying Emma of Normandy and producing a second family. The chronicles, however, claim that Ælfgifu’s sons were not the children of Cnut, with John (also known as Florence) of Worcester saying, ‘Ælfgiva desired to have a son by the king, but as she could not, she caused the new-born child of a certain priest to be brought to her, and made the king fully believe that she had just borne him a son’. And the Anglo-Saxon Chronicle claimied ‘[King] Harold [I Harefoot] also said that he was the son of king Canute and Ælfgiva of Northampton, although that is far from certain; for some say that he was the son of a cobbler, and that Ælfgiva had acted with regard to him as she had done in the case of Swein: for our part, as there are doubts on the subject, we cannot settle with any certainty the parentage of either. 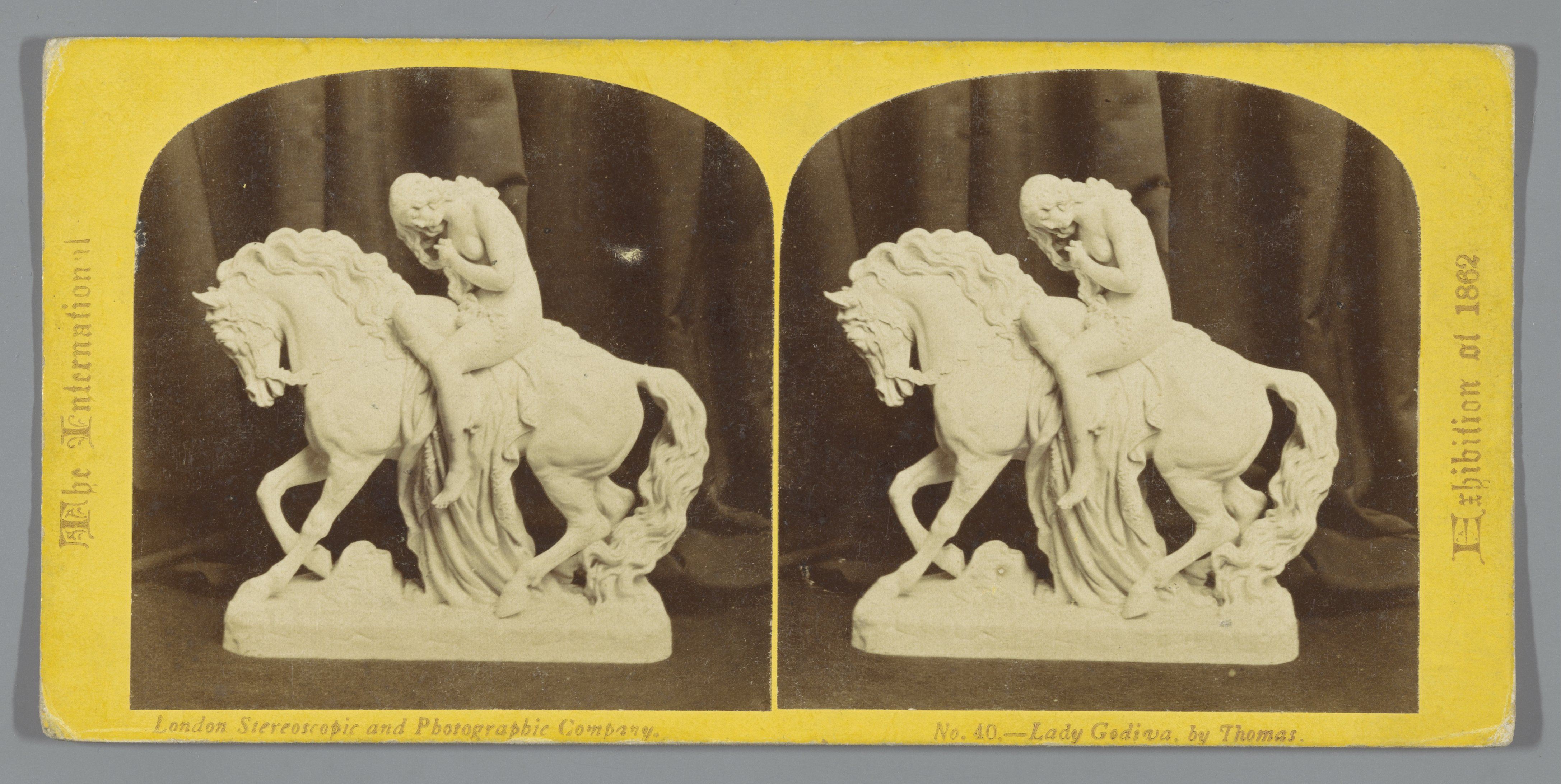 7. There were some incredible, strong women in the 11th century.
The story of the Norman Conquest invariably revolves around the men involved, Edward the Confessor, Harold II, William the Conqueror, Harald Hardrada, and so on. However, there were some amazing women whose strength and perseverance helped to steer and shape the events of the era. There were, of course, the queens, Emma of Normandy, Edith of Wessex and Matilda of Flanders, who supported their husbands and helped to shape and – even – preserve history, with Emma and Edith both commissioning books to tell the stories of their times and Matilda being the image of queenship that all future queens of England modelled themselves on. There was also the notorious Lady Godiva, who was probably a lot less scandalous than the legend, of her riding naked through Coventry, leads us to believe. And the incredible Gytha of Wessex, a woman whose story is entwined with every aspect of the period. From the reign of Cnut to that of William the Conqueror, Gytha and her family were involved in so many aspects of the Norman Conquest, from the rise of her sons, through the Battle of Hastings itself, to the English resistance in the years immediately following the Conquest. Gytha was not one to give up easily, despite the horrendous losses her family suffered (three of her sons died in one single day at Hastings), she encouraged her grandsons to lead the opposition against the Conqueror in the west, but her eventual failure saw her seek shelter in Flanders, where she disappears from the pages of history.