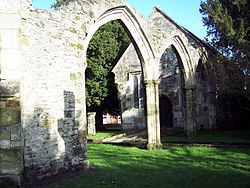 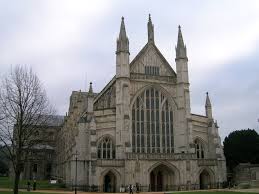 As well as castles, Cathedrals and Abbeys feature as locations in The Swan-Daughter, The Handfasted Wife and the shortly to be published The Betrothed Sister.

Westminster Abbey features in The Handfasted Wife. King Edward the Confessor, called so because he was so pious, was responsible for the rebuilding of St Peter’s Church on the site of today’s Westminster Abbey. This is not the Abbey Church or Cathedral we see now because it was rebuilt again by Henry III in the thirteenth century in a Gothic style popular in the High Middle Ages. King Edward’s new abbey was built in Norman Perpendicular style and was consecrated on Holy Innocents’ Day, 28th December 1065. Edward was described as tall, dignified with rosy cheeks and a long white beard. He was regarded as a saint long before he was canonized by Pope Alexander III in 1161. He was no martyr but he demonstrated sanctity in the face of worldly temptations. Interestingly, he had no children with Earl Harold Godwin’s sister Edith leading to speculation that he was ‘pure’ and monk-like. After his death miracles were attributed to him. He died a few days after the new abbey was consecrated leaving a critical succession crisis. Edward, the Abbey Church and the succession crisis that led to The Norman Invasion feature in The Handfasted Wife. King Edward’s Westminster Abbey is shown on The Bayeux Tapestry. He was buried in his new Cathedral. 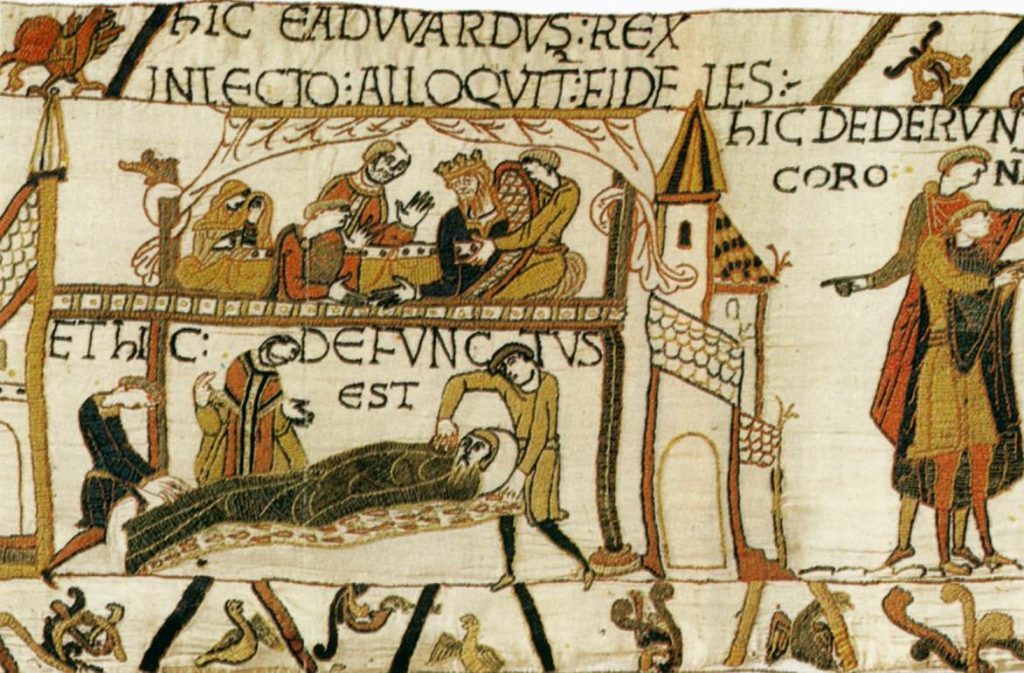 Winchester Cathedral has a long history stretching back to King Alfred. Even today the Cathedral contains the bones of England’s early medieval kings. This Cathedral is a major location in The Handfasted Wife after the Battle of Hastings in October 1066. It was to the royal palace of Winchester that King Edward’s widow Edith Godwin retreated when her husband died and her brother, Harold, was crowned king in January 1066. She was pragmatic and handed over the keys to the city and the Royal Treasury to the Norman invaders once they arrived at Winchester, without complaint. This is recorded in The Anglo-Saxon Chronicles. Much of the central section of The Handfasted Wife takes place in Winchester. The building we see today, however, was founded in 1079 shortly after the Conquest. The new Cathedral was not built all at once. It demonstrates the main phases of English church architectural styles from the 11th century to the early 16th century. As a consequence, styles ranging from Anglo-Norman to late Gothic are beautifully preserved within this Cathedral. The crypt is 11thC Romanesque with low massive pillars, heavy round arches, vaulting without ribs or bosses and narrow windows with rounded heads. The Old Anglo-Saxon Minster had stood for 450 years! Today, if you visit Winchester, you can still see the remains of its great monastery, St Swithun’s Priory and the 14th C Pilgrim’s Hall.

By the tenth century the Old Minster was the priory church of a community of Benedictine monks. In this century, the bones of St Swithun were dug up and housed in a new shrine inside the minster. St Swithun soon became the object of pilgrimage which continued throughout the Middle Ages. All around his tomb at the time of The Handfasted Wife, the walls were hung with the crutches of people he had healed. 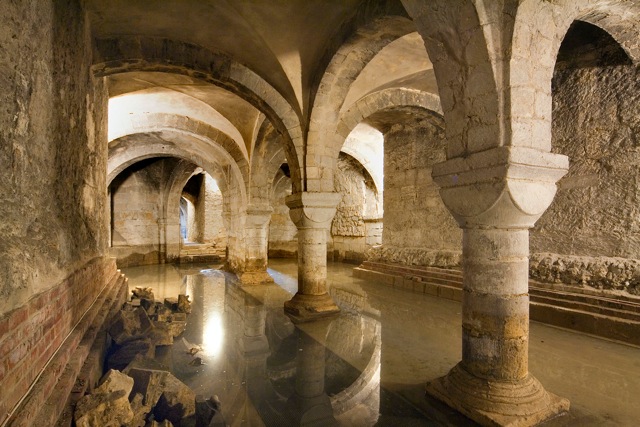 Wilton Abbey features in both novels, The Handfasted Wife and The Swan-Daughter. Its first foundation was built in wood as a college for secular priests in 773. Around 802 it was changed into a convent for twelve nuns. King Alfred founded a spacious new convent on the site of the royal palace at Wilton and added it to the older foundation. The concubine/wife of Edgar of the English, King 959-75, was abbess of Wilton in the early 960s. She brought substantial property to the abbey and used her wealth to increase Wilton’s relic collection. She also brought her daughter Edith to the abbey. Edith died at the age of 23 but since miracles were attributed to her, her mother later promoted her cult as a saint. I believe she may be associated with The Bayeux Tapestry, connected to the vignette ‘where a priest and Algeva…’ This, however, is a story for a future post.The abbey had suffered during early 11th C Danish attacks. Queen Edith, wife of Edward the Confessor, who was educated there as a girl, rebuilt the abbey in stone. At the time of The Handfasted Wife it housed a school for aristocratic young ladies and embroidery workshops. It is likely that some panels of The Bayeux Tapestry were embroidered at Wilton. According to various primary sources Gunnhild, King Harold’s younger daughter who was in Wilton Abbey in the early 1070s with her Aunt Edith, eloped with Alan of Richmond, a cousin of William the Conqueror. The story of their elopement forms the basis for my narrative in The Swan-Daughter.

Other religious places referred to in my first two novels in The Daughters of Hastings series include Abingdon Abbey, Bangor Abbey in Ireland, Exeter’s Minster and St Benets in Suffolk.

I enjoyed visiting and researching all of the locations used in both historical novels. They are amongst my background locations. Both novels are filled with page turning historical adventure and many references to women’s daily life before and after Conquest. 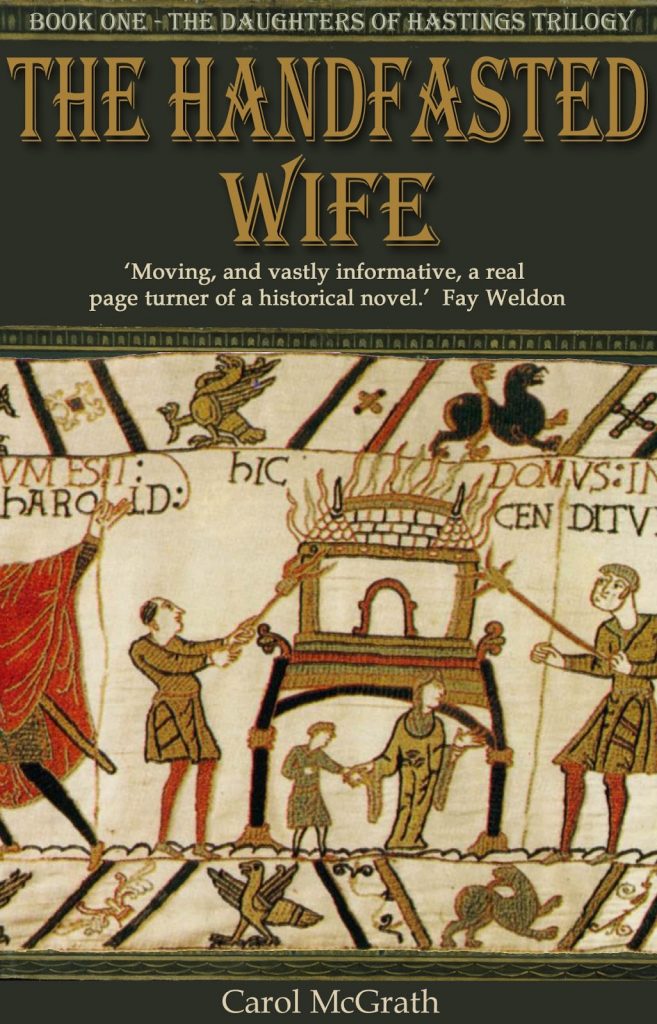